The Perito Moreno Glacier in Patagonia Argentina stretches across two hundred and fifty square kilometers and covers an area as large as the city of Buenos Aires. A catamaran takes one to within three hundred meters of the jagged walls, crevices, and peaks, of the shimmering, ice-blue, glacier which looms like a massive ice sculpture out of the lake. Between the cracks, one glimpses turquoise blue sheaths of ice which have the quality of translucent glass. The silence that blankets the landscape is broken every now and then by a ‘Boom’ followed by the tinkling sound of ice shattering and tumbling into the water. The sound reverberates and carries across Lago Argentino. 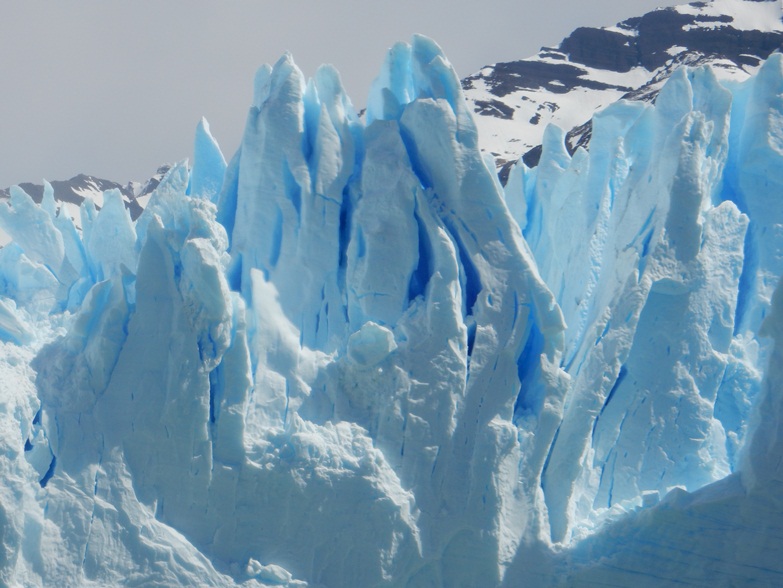 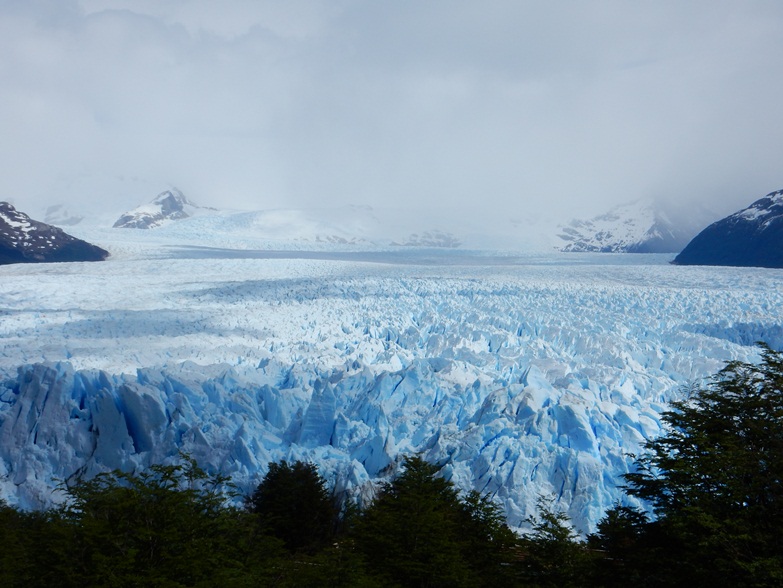 We stand in the darkness, awaiting the dawn, warming our hands on our mugs of steaming hot coffee. As the sun peeks over the horizon, it is as though we are in a concert hall where the curtain slowly rises to reveal a breathtaking set. We watch in silent awe as jagged, towering peaks appear below us as far as the eye can see. Like chameleons, their color changes from grey to pink, peach, and yellow. When we hike into the canyon we are dwarfed by these exquisite spires – the hoodoos – that range in height from 1.5 to 45 meters/5 to 150 ft. and resemble ancient totem poles. Over the next few days, we hike the trails at sunrise and sunset, and each hike fills us with a sense of awe akin to a spiritual experience. 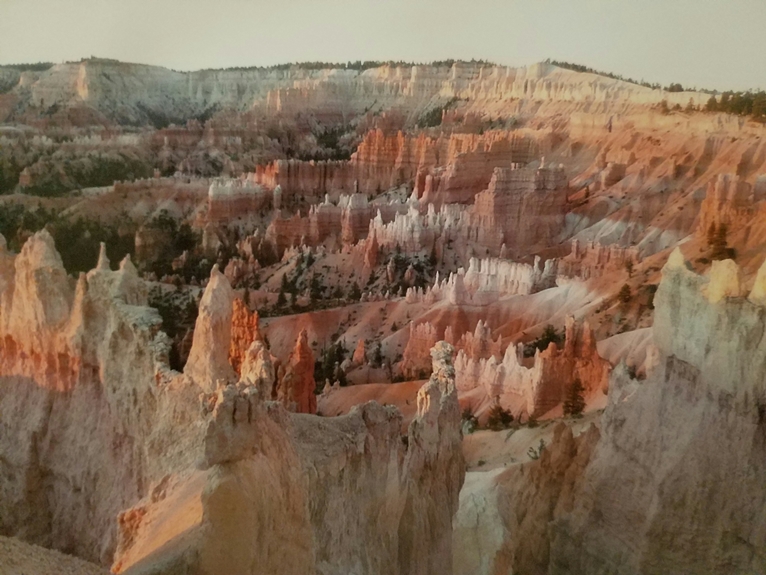 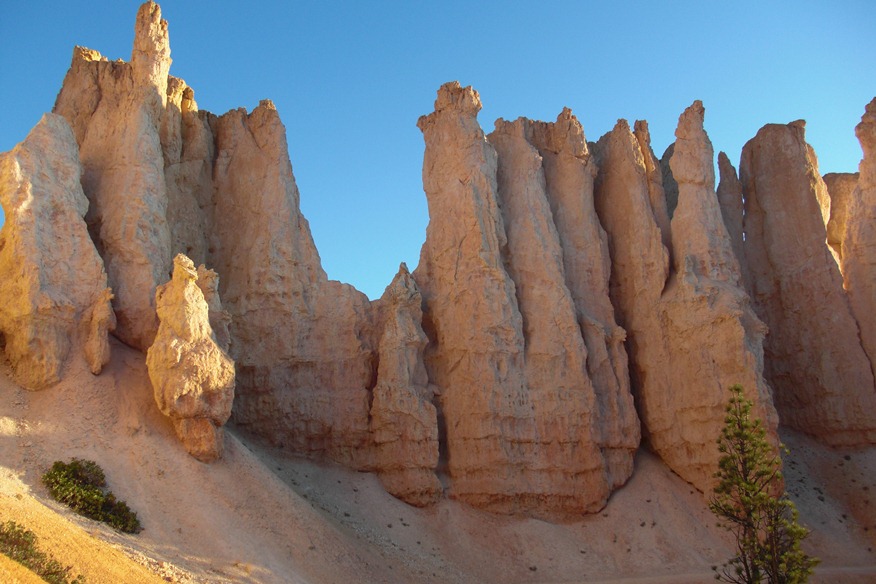 Caves are always mysterious and enchanting. But snorkeling in the cenotes of Mexico’s Riviera Maya takes the magic of caves to another level. The cenotes are fresh water, underwater sinkholes, which were formed millions of years ago when limestone caves collapsed revealing underground pools. The pools were regarded as sacred by the indigenous Mayan people for whom they were a precious source of fresh water. There are said to be over 6,000 cenotes in the Yucatan. Some are like wide open pools, but for me, the most enchanting are those that have small openings. One drifts in, and suddenly one has the feeling of having entered a secret, underwater, wonderland. Swimming – flashlight in hand – above, around, and in between the underwater spires from one subterranean cavern to another – is exhilarating. One gets lost in time and space. There are guided snorkeling and diving tours of the cenotes. There are also maps and several books that have been written. Some cenotes are relatively easy to navigate while others are definitely for more experienced divers. 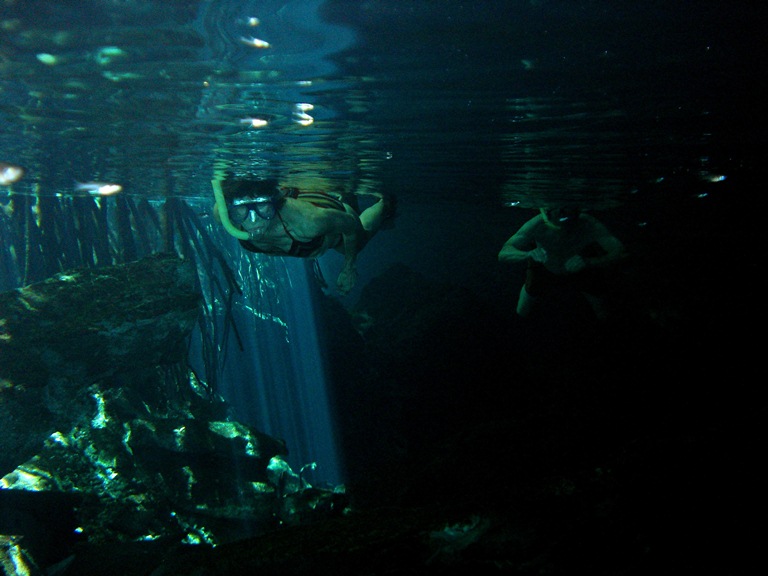 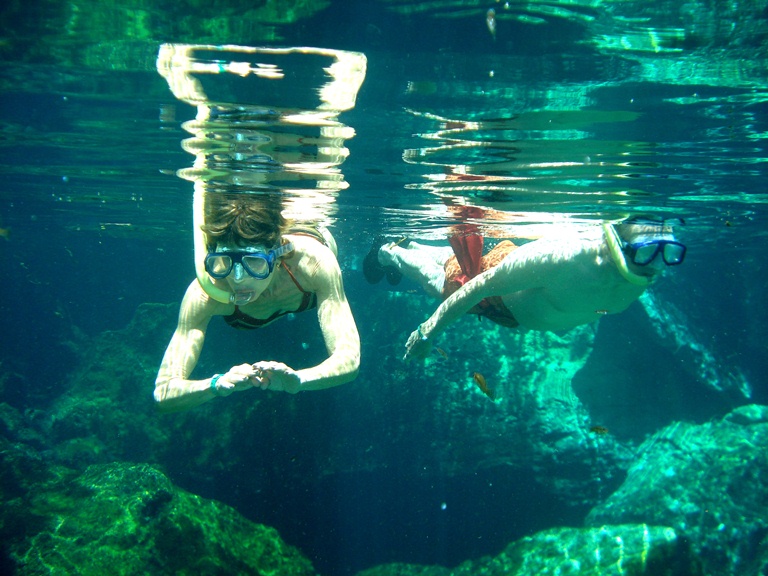 The Iguazu Falls are immense, grand, powerful! Layers of waterfalls as far as the eye can see, thunder and cover the surrounding area with a fine spray. Rainbows appear, and the air is pungent with the rich smell of fertile soil. We walked the trails of the Argentina side and then the Brazilian side which was the absolute highlight of our experience. Tip: Walk the path in the opposite direction to which it is meant to be walked. That way you avoid being caught in a crush of tourists. Devil’s Throat, where one can walk out on a suspended bridge that zigzags its way over the falls, is a thrilling experience. One feels as though one is about to go flying into the falls as they thunder and tumble with ferocious force all around you. While we’ve visited fantastic waterfalls in other countries, we found Iguazu to be the most extensive and most spectacular. 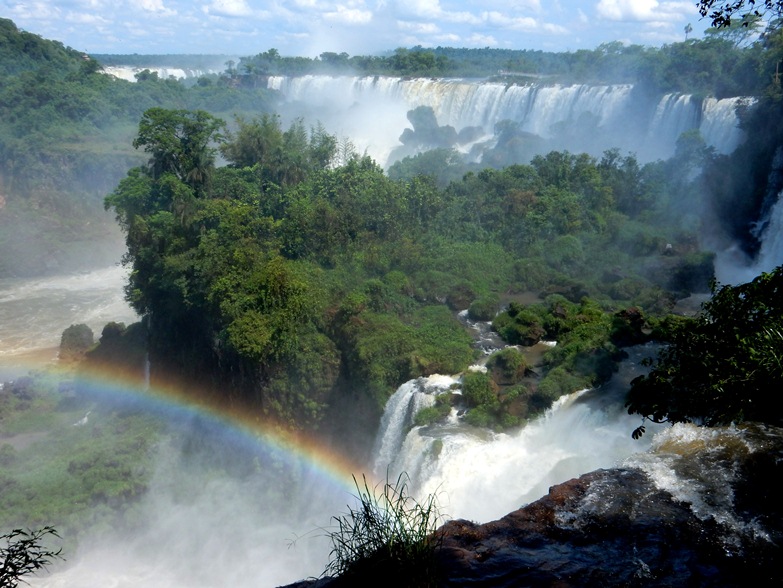 Cappadocia is an incredible sight at any time of the year, but in the winter when it’s dusted with snow and devoid of tourists, it’s spectacular. The landscape surrounded by volcanoes is dotted with phallic fairy-chimneys topped by basalt caps, and cone-shaped, volcanic rock formations. The ‘chimneys’ were created over millennia by volcanic eruptions, wind, and water erosion. The layer of rock below the basalt is soft and easy to carve. For centuries people carved their homes, churches, and mosques, into these structures created by nature. We paid an impromptu visit to a resident of one of the chimneys who invited us to join him for a cup of tea and conversation. Our host shared with us that medical studies have concluded that the inhabitants of the chimneys have fewer ailments and increased life expectancy. This phenomenon is thought to be due to the air quality of the homes built inside the porous rock, the absence of chemicals-based paints, and toxic building materials. That, coupled with the unpolluted outdoor air, and the use of pigeon droppings – a pesticide free fertilizer – on the crops grown in the valleys. 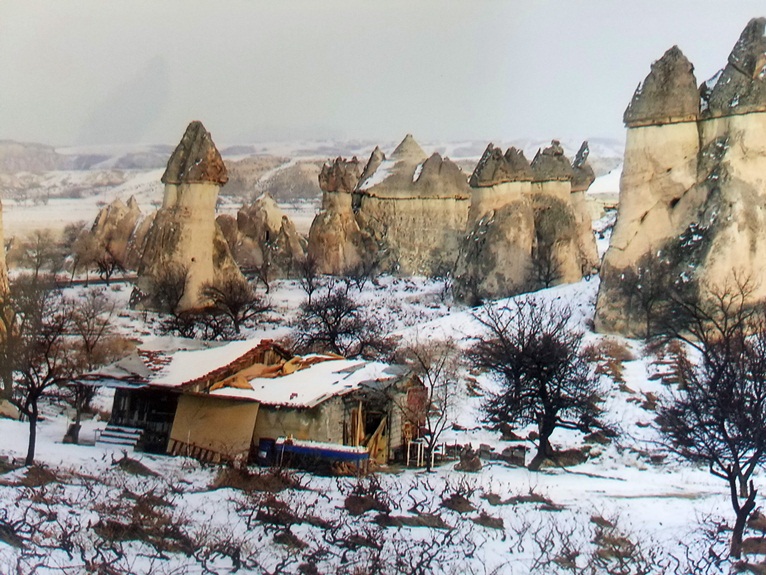 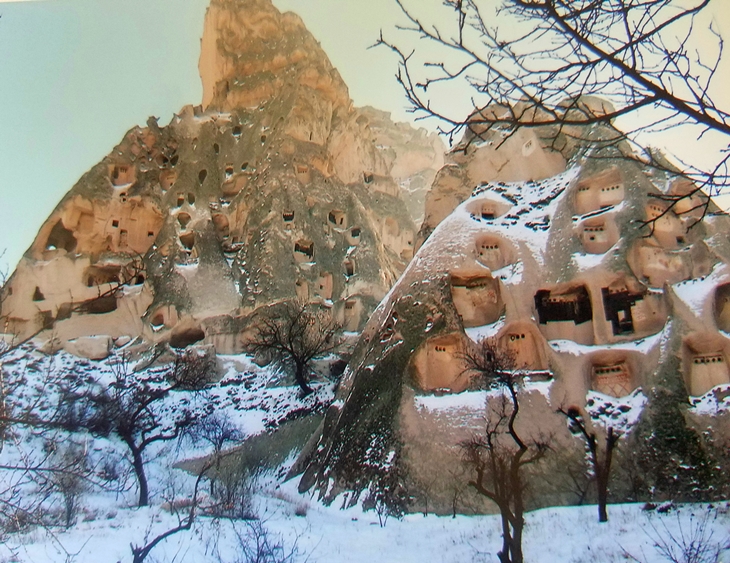 On the day that we visited Sol de Mańana the heat of the prior day had flipped to freezing temperatures and snow. The geothermal field of Sulphur Springs, which covers over 10km at 5000 ft. above sea level, resembles a foreign planet. We donned every item of warm clothing available and stepped out into this otherworldly landscape. The snow was hitting us from the one side and the hot steam from the other. The pools boil, bubble, gurgle, and pop, puncturing the total silence that blankets the area. We walked along narrow ledges across this living, breathing, hissing, landscape, oblivious to the cold and the snow, mesmerized by the boiling pools of mud in colors that range from steel-grey, to green, and oatmeal. An exhilarating, unforgettable, experience. 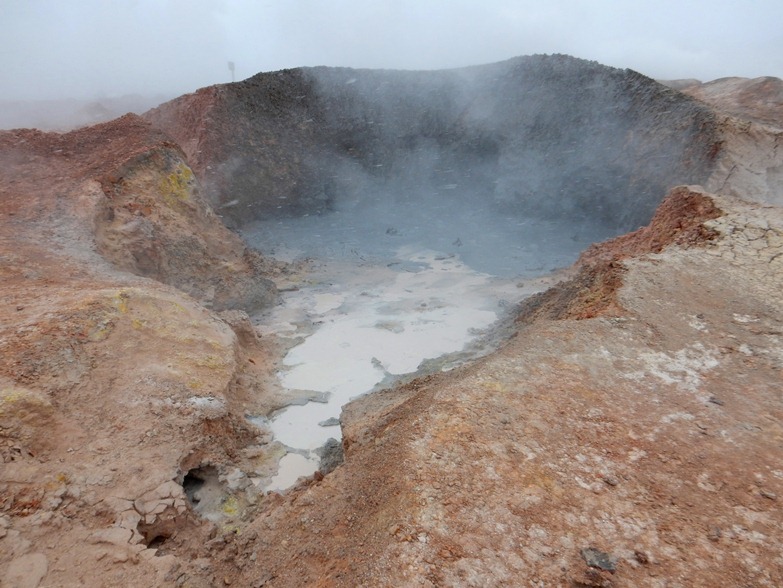 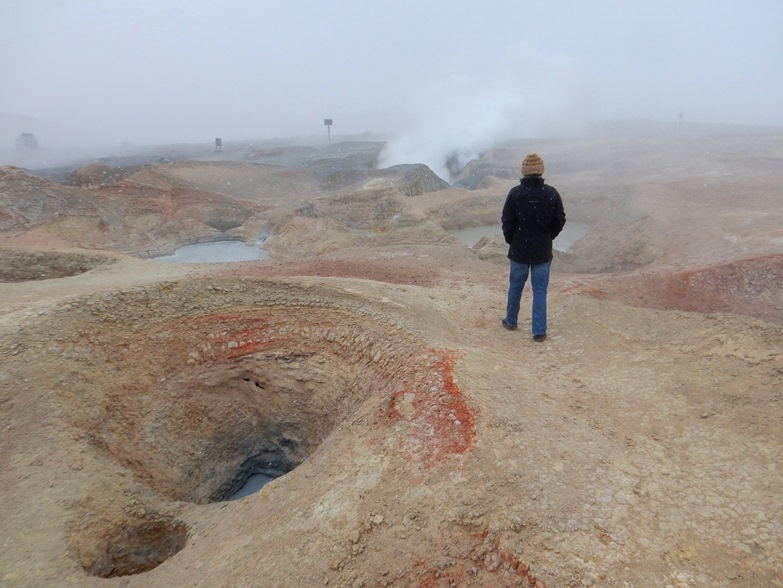 Though called a ‘sea,’ the Dead Sea is actually a lake. It’s also known as the “Sea of Salt” due to its incredibly high salt content. Because of the high salt content neither fish nor plants can survive its waters, hence the name – Dead. The Dead Sea has been known for its healing properties since the days of King David and King Herod the Great and is perhaps one of the world’s earliest spas. Today people flock to the Dead Sea to experience floating on its surface while reading a book or a newspaper, then covering themselves from head to toe in black Dead Sea mud which makes them look like walking, black marble statues. There’s a thriving industry in lotions, shampoos, bath salts, and skin treatments from the Dead Sea. Its high content of minerals such as potassium, magnesium, sodium, and calcium, have made it famous for its healing, therapeutic, and detoxifying, effects. Those seeking relief from psoriasis, arthritis, and poor blood circulation, return time and time again to spend time in one of the many spas that have sprung along its shores. At 1,400 feet below sea level, the Dead Sea lies at the lowest elevation on earth. 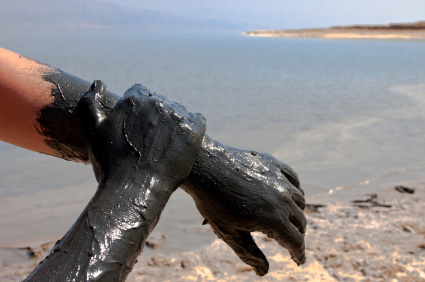 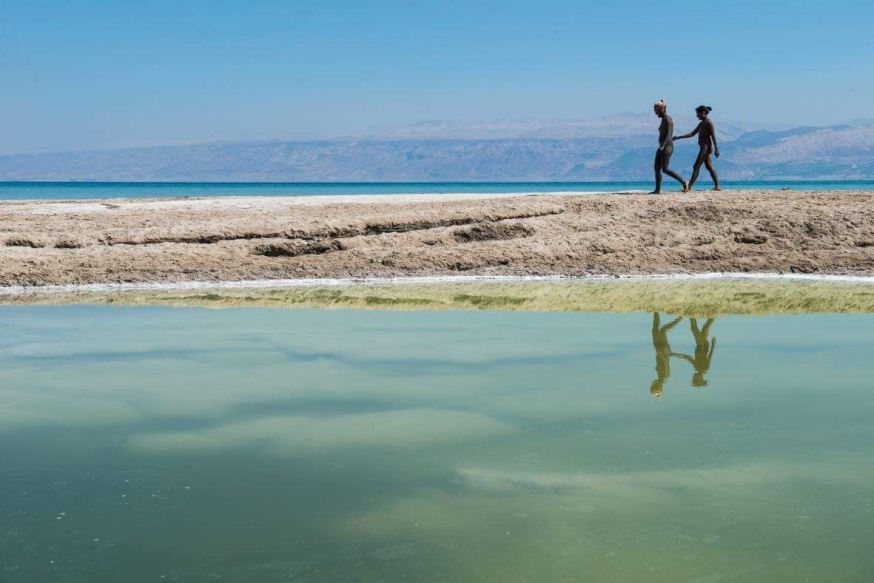 The Grotta Azzurra (Blue Grotto) is the jewel of Capri. A sea cave discovered centuries ago during the times when emperors ruled Italy – it was a marine sanctuary where an emperor could relax in his private nymphaeum. Subsequently, the grotto fell into oblivion becoming a fabled place thought to be inhabited by strange creatures. One reaches the grotto via boat from Marina Grande. Outside the grotto, one transfers to tiny rowboats that accommodate only two to three people. Our thickset, handsome, grey haired, mustached, boat driver, rowed to the tiny mouth of the cave, waited for just the right moment, barked at us to lie down, grabbed onto a steel chain beside the entrance, dropped his oars, and pulled us into the cave. The color is spectacular! Sunbeams filter through an underwater cavity and illuminate the water creating a color of incomparable iridescent blue. Our boat driver broke out into an operatic aria delivered in a rich baritone voice. As we rowed through the grotto, other boat drivers joined him in song. The sound of their voices, the atmosphere of the grotto, made me feel as though I’d stepped into a world that only exists in the pages of a fairytale.

Salar de Uyuni could be another planet. A blinding white expanse of salt stretches across 10,582 square kilometers (4,086 square miles). Under a cloudless blue sky, the white surface of patterned polygons shines with such intensity that it appears to be fresh snow. We drove across the hard surface marveling at how the local drivers find their way with no markers, no signs, no roads, nada! Tourists who have attempted driving across the Salar have been known to become disoriented and get lost for days on end. After hours of driving, a volcano loomed in the distance. It seemed to be floating on water; an optical illusion like a mirage. As we drew closer, we could see the magnificent, massive crater at its apex. Our guide and driver set out a table and chairs on the salt and served us an amazing picnic lunch. That night we checked into Palacia de Sal – a hotel built from salt. 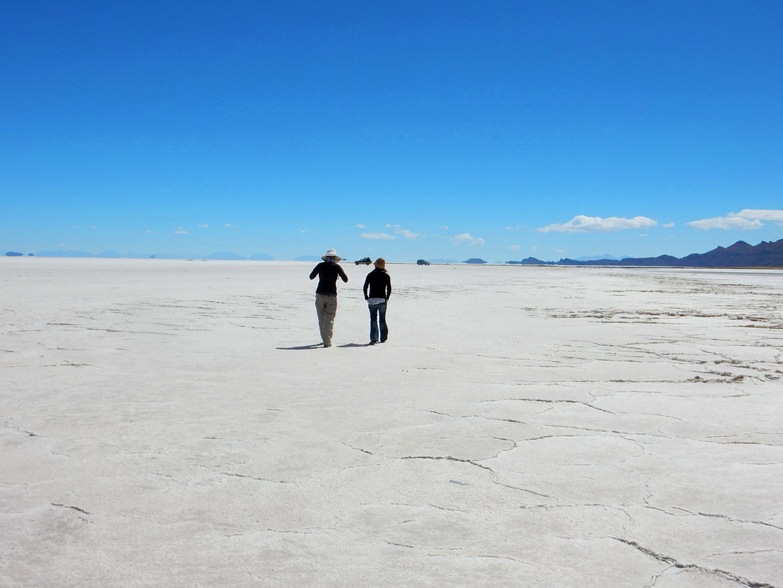 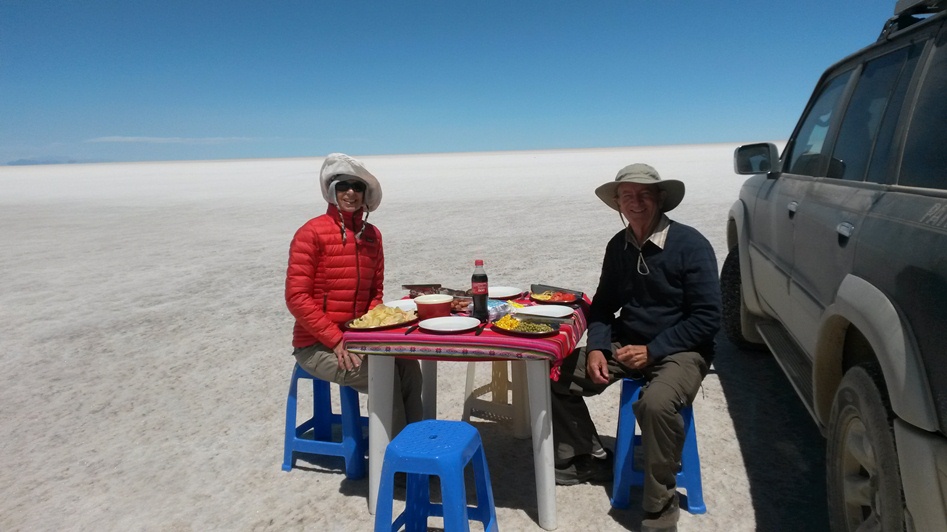 Arenal Volcano dominates the surrounding tropical landscape. Standing 5,437ft. high, it is Costa Rica’s most active volcano though at present one no longer sees its lava flowing nor clouds of ash being tossed into the air. Scientists say that while it’s still active, at the moment, it’s taking a nap. Between 1500 and 1900 it was thought that Arenal was extinct. It came alive again in 1900, and between 1968 and 2010 it was extremely active. When we first visited Arenal, we stayed at The Arenal Lodge in a suite that had an uninterrupted view of the volcano blowing smoke into the air. The highlight of that visit was a night hike partway up the volcano with a young adventurer from Belgium who had spent several years studying Arenal. He assured us that the lava would not fall on the side where we hiked, and we decided to take his word for it. The feeling of walking under a black, star-studded sky, on a rumbling, growling, mountain and then standing in jaw-dropping silence as it tosses rocks and red lava up into the black sky – simply defies description. 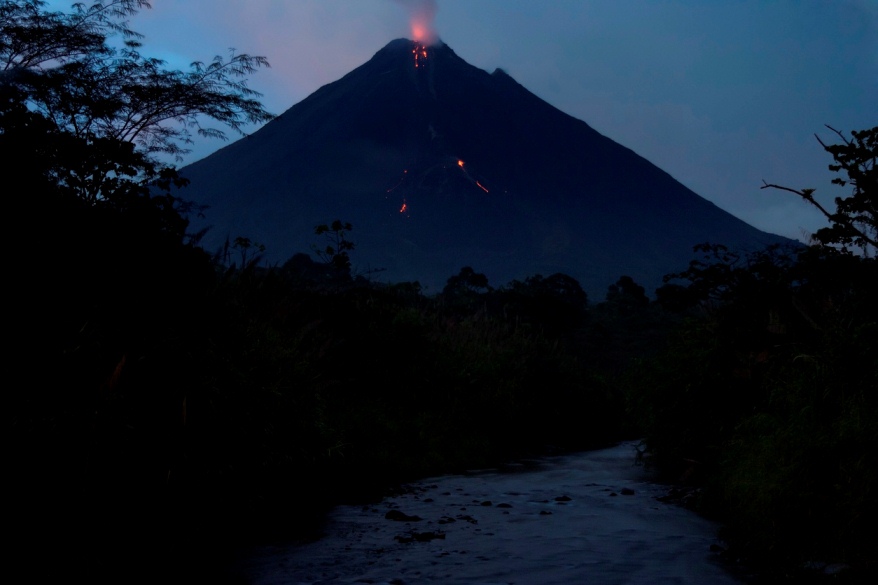 Disclosure: I did not take the following photos.
Inside the Blue Grotto/ The Dead Sea/ Arenal Volcano
Photo of two people on the beach covered in mud at the Dead Sea, courtesy of Ofer Blank/ Anaim
Check in to read my next TOP 10: Top Ten Asia Views From My Window