I had very much wanted to spend time somewhere in China where there aren’t millions of people and where we could get a taste of authentic “old” China. My research led me to Old Town – Lijiang. It is so incredibly beautiful, that neither words nor photos can do it justice.

Our driver dropped us on the outskirts of the Old Town where a smiling man of the Naxi tribe – with copper colored skin, high cheek bones, a chiseled jaw, smiling eyes, and an patrician nose- took charge of our luggage, loaded it into the cart attached to his tricycle, and pedaled away with the two of us and his helper in tow.

The lanes of the Old Town just wide enough to accommodate four, and a maximum ‎of maybe six people abreast are paved with ancient cobbled stones, worn to a smooth and shiny gloss by the feet that have walked them and the elements that have weathered them to reveal their true colors: burgundy, grey, cream and flecks of green.
‎Homes, inns and stores all built from a rich dark reddish brown wood, are crowned by wing tipped roofs in the ancient Naxi style that like a swallow in flight, swoop downward then take off again pointing toward the sky. Wood carved lattice work on the facades allows natural light into the structures while also providing privacy.

Fifteen minutes into our walk we came to a wooden bridge that spanned a gurgling little river where the path split into the river road below and the village road above. We crossed the bridge and there in the shade of the weeping willows stood the fairytale Jun Bo Xuan, Boutique Inn. Owned by the same family for three generations, this grand expansive family home has been reimagined by the current owner and granddaughter, into a ‎10 suite boutique hotel.
It’s jaw dropping gorgeous!! 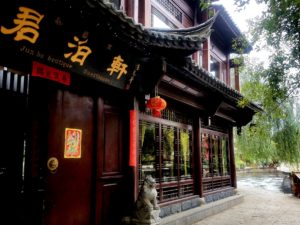 Our suite was flooded with light, which poured in through the walls of windows. Our bedroom overlooked the river, a traditional tea house ‎, and quaint bridges. Our stone bathtub felt as though it sat among the boughs of the willow trees, while our shower room looked over the central courtyard of the house where a little waterfall cascaded into a flowering pond full of Koi fish. The soothing sound of water surrounded us. 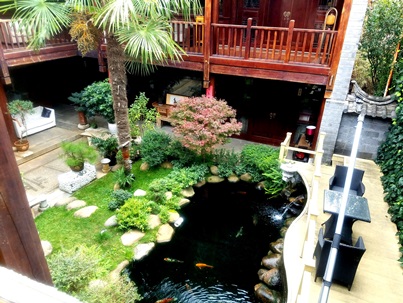 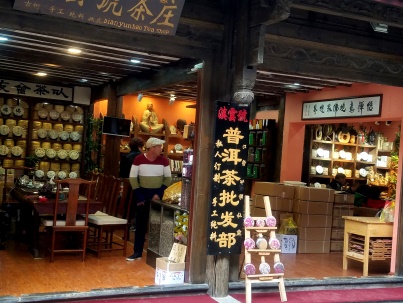 Shangri-la exists!
We felt as though we’d magically been plopped down into it for two and a half days.

We spent our days walking and soaking it all up. No tours to take, no early morning alarm clock, no agenda at all.
Among the picturesque homes, both modest and grand in scale, are those that have been converted into gorgeous inns. All the little stores and restaurants are open fronted and sheltered from the rain by the wing tipped eaves,
The quality, the variety, the originality, the beauty of the boutique stores, is captivating though they clearly cater to the local tourist trade. The delectable smell of crispy, fruit filled ‎ “flower cookies” which are baked throughout the day, wafts through the air.
In the unique tea houses, ‎selling tea is a ritual that takes time, education and tasting. It’s an art and a process which cannot be rushed.
In the boutiques selling scarves, the young fashionable proprietors sit and weave.
In the store where traditional handmade drums are sold, a young musician with porcelain skin, silken black hair and red rosebud lips, drums and sings accompanied by recorded rhythmic music.
In the lamp store, a stunningly good looking Naxi man makes lampshades out of handmade paper, which he adorns with calligraphy.
In the candy store the baker pulls and stretches long ropes of elastic toffee to get it to the right consistency before baking it. 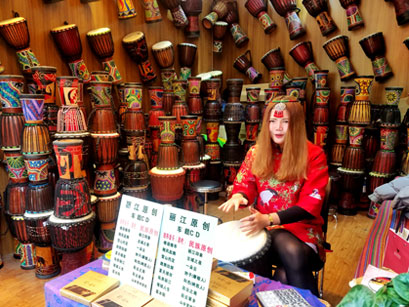 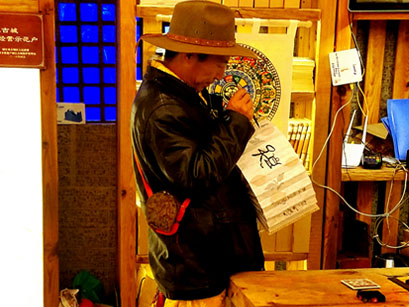 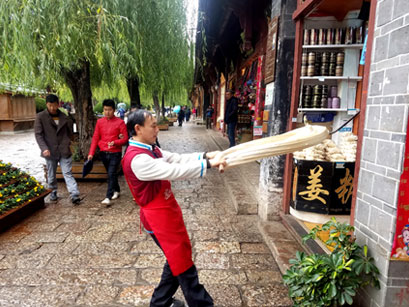 The town is pristine. Neither trash nor garbage pales to be seen. Even the river is devoid of leaves and twigs. Weeping willows, water bamboo‎ and trailing vines are on steroids and the entire town is a botanical garden. Never in my life have I seen a place where flowers grow in such profusion. 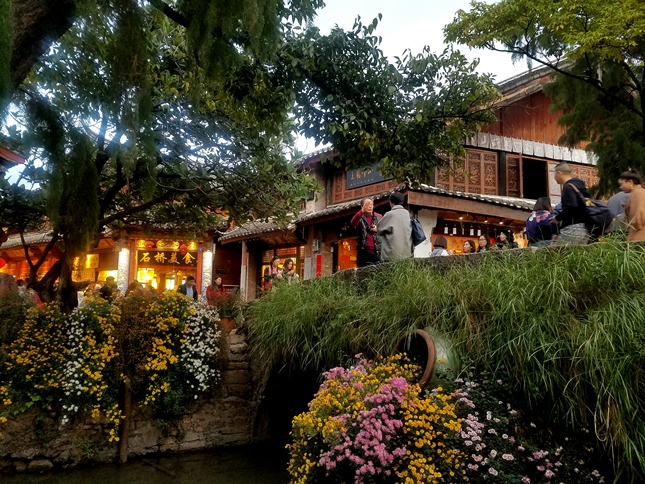 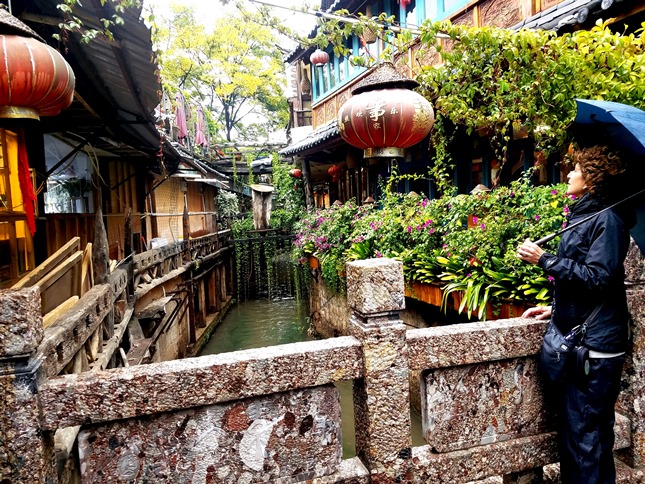 Many well to do young Chinese couples and singles flock to Lijiang for a few days of vacation and a respite from the overcrowded cities. They are dressed in the height of fashion, their outfits assembled with superb taste. The women are like petite models on a fashion runway, showing the latest fashions with a Chinese flair and twist that makes their pizzaz all the more appealing and enchanting.
‎We walked endlessly, we hiked to the outskirts of town to the magnificent Dragon Pool Lake dotted with pagodas that rests in the shadow of the towering mountains, we shopped for gifts, we read and people watched while sipping cappuccinos , and savoring China’s little gem.