There’s something about being sequestered on an island away from the traffic, the pollution, and non-stop action that makes them so appealing. While many of my Top Ten picks offer relaxation, beaches, and blue skies, a couple of them are like stepping back in time to a place that only exists in our imaginations, while others are of historical importance and leave a lasting impression.

1) The Maldives: A country made up of a chain of 1,192 islands on 26 atolls, ringed by coral reefs. It lies in the transparent turquoise waters of the Indian Ocean and is most commonly reached via flights from Sri Lanka or Bangalore-India. Most resorts occupy an entire island, and there are no cars, shops, movie theatres, or distractions, besides water sports, a good book, and a hammock. One can spend hours spellbound just lying on the surface of the water enraptured by the variety of painted fish and the delicate coral. It’s a fabric designer’s dream! The colors, the textures, the patterns, and the shapes are inspirational. Eat, sleep, swim, read, go for a jog around the island, treat yourself to a massage. Repeat! Rejuvenate! 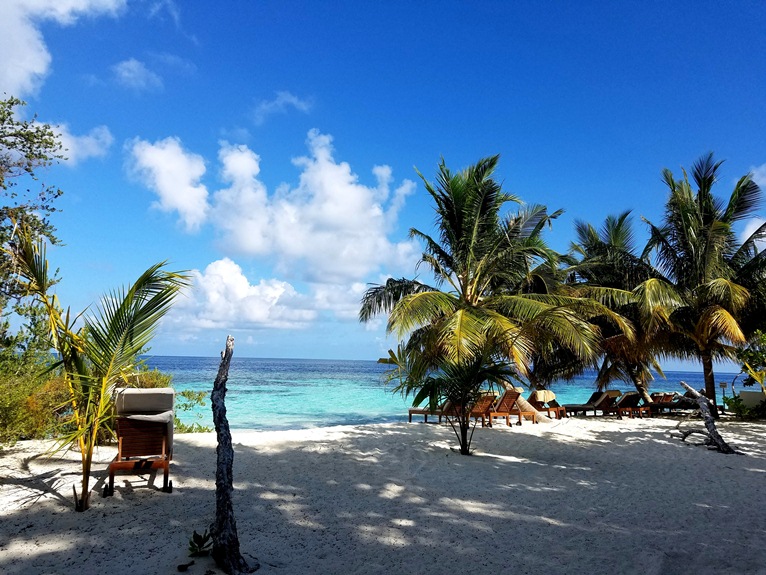 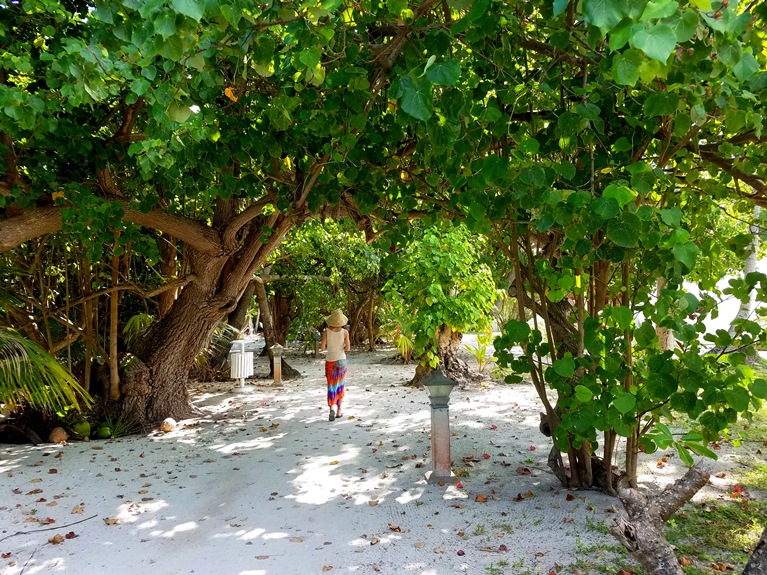 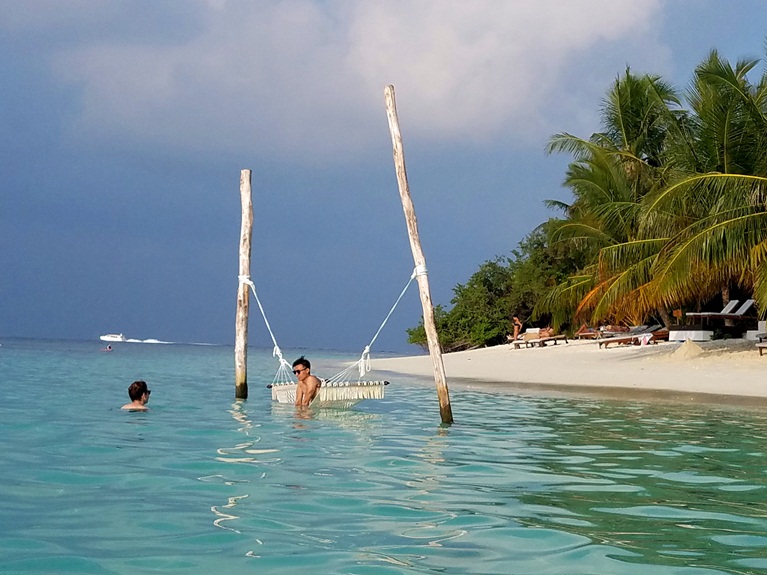 2) Catalina Island – Southern California: In 1957, The Four Preps composed a song that became synonymous with Catalina Island, and it goes like this: "Twenty-six miles across the sea Santa Catalina is awaitin for me. The island of romance, romance, romance." Fifty-plus years later Catalina’s seductive charm endures. No matter what the season, Catalina is a place to decompress and unwind. The mode of transport is on foot or by golf cart. In the summer – the little beaches and the clear, calm, waters, lined with palm trees – are a sun and beach lover’s haven. Boats bob in the marina, kayaking, snorkeling, scuba diving, paddle boarding, and zip lining, are popular, and the village of Avalon is abuzz with visitors enjoying the cafés, restaurants, shops, bars, spas, and Big Olaf’s ice cream in freshly baked, crunchy cones. In the off season, the beaches are blissfully quiet; there’s golf, mountain biking, amazing hikes to the interior where wild bison and deer roam, and adventure tours. Don’t make the mistake of being a day tripper. To fall in love with Catalina the island of romance, stay at least two nights. 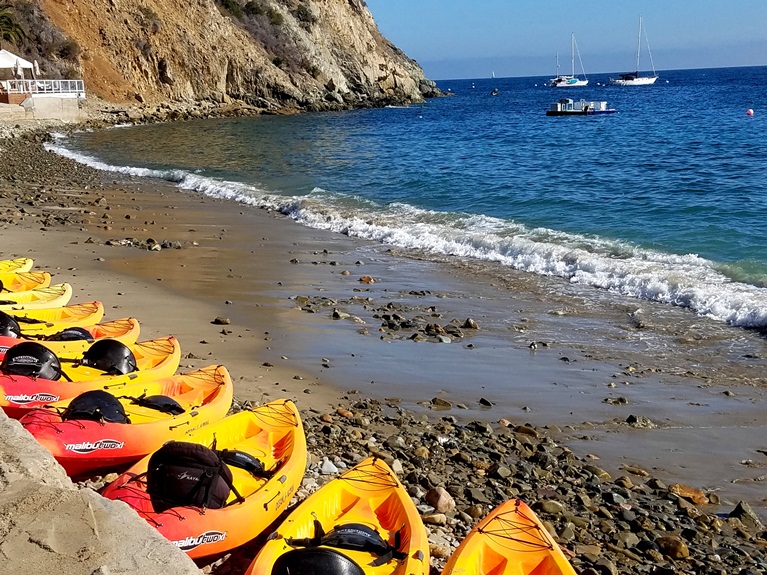 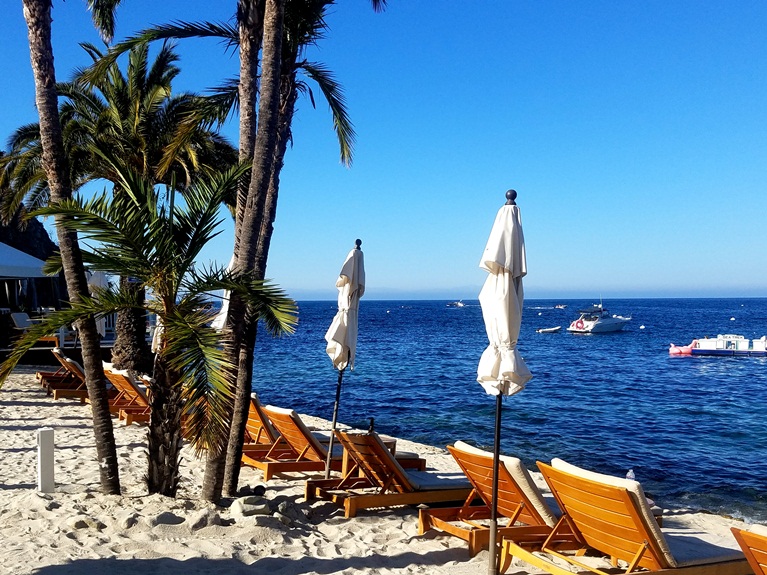 3) Taquile – Peru: Surrounded by the sapphire blue waters of Lake Titicaca – Taquile is completely unspoiled and idyllic. Day visitors arrive by boat from Puno, hike up to the island’s central plaza, spend a few hours and leave. To truly experience Taquile, spend the night in a home-stay with a native family. Hike to the Pre-Inca ruins at the highest point of the island in the evening and wake up early to the sight of the snow-capped Andes. Breathe in the fragrant, sweet, pure, unpolluted morning air. In the golden rays of the morning sun, hike to the horse-shoe shaped beach and on the way meet the tiny tots in their traditional clothing walking to school. Both men and women wear clothing made from woven cloth decorated with symbols that reflect ancient Andean beliefs. Many of the islanders speak Aymara – a language which predates the Inca period. They eat a healthy diet of fresh fish from the lake, vegetables, and eggs. They knit woolen caps, scarves, and gloves: weave fabric; and sell or barter their handcraft in Puno for sugar, oil, and rice. To experience Taquile is to find your way to a place that you thought only exists in storybooks. 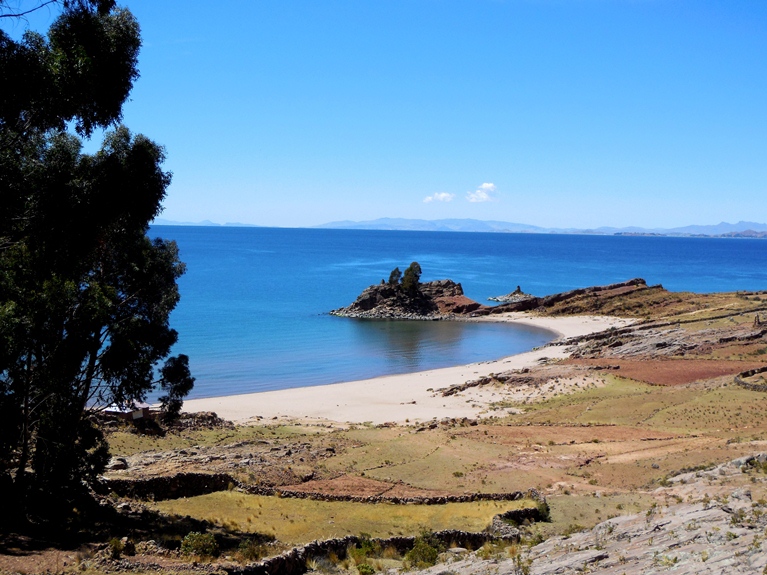 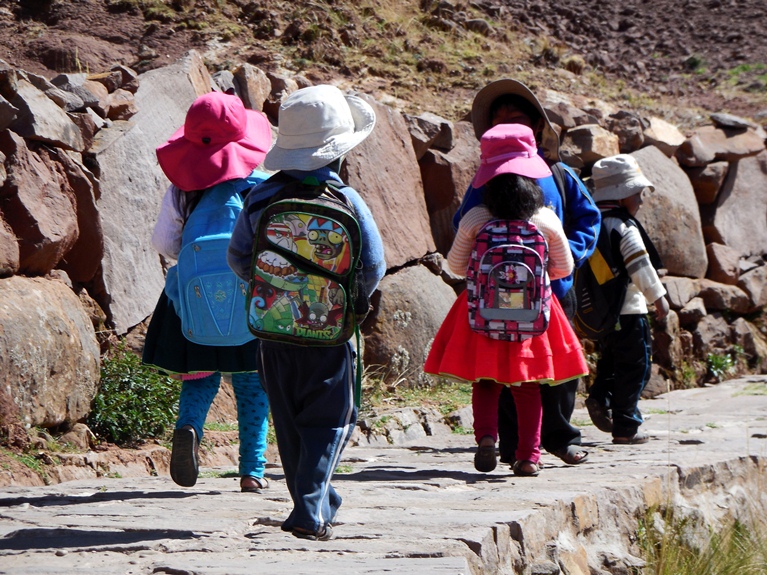 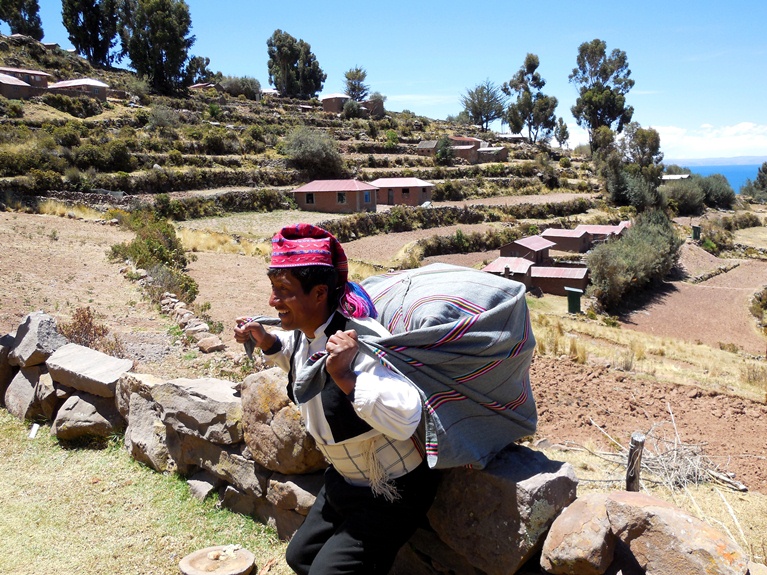 4) St. Lucia – Caribbean: St. Lucia, embraced by the warm turquoise waters of the Caribbean Sea is the quintessential blissful island. From secluded picture-perfect Marigot Bay, which James Michener called "the most beautiful place in the Caribbean," to Anse Chastanet with its secluded beach and spectacular views of the Piton Mountains. Anse La Raye is famous for Seafood Fridays when the little village becomes a seafood diner’s heaven. Stop in at a roadside bakery on the way to Soufriere and taste the island’s popular Cassava bread. It’s an acquired taste! Head to the Fond Doux Estate for lunch and tour the cocoa plantation. For a terrific forest hike – take an early morning hike through the Barre De L’isle Rainforest; it’s dense, fragrant, peaceful, and steamy, and the view from the top is sensational. Drive to Dennery – a town on the east coast of the island and hike to the Sault Falls, the most beautiful falls on the island. 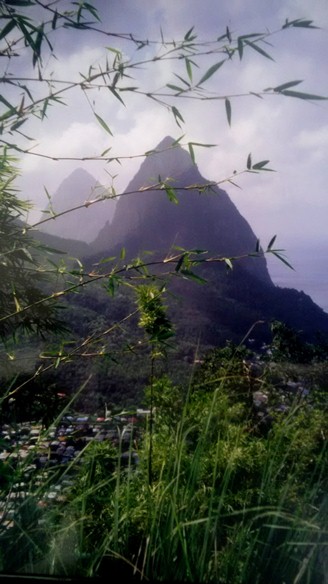 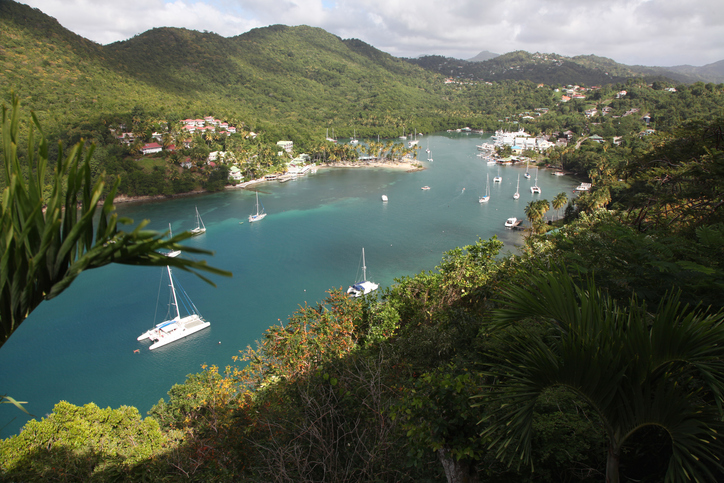 5) Korcula – Croatia: Korcula which rests just off the Dalmatian Coast is the jewel of the Adriatic Sea. It has the flair and charm of a historic European village, crystal clear calm waters, and great cuisine. Boutiques, cafes, and galleries hug its narrow, pedestrian-only, cobbled lanes. The tempo is island-slow, and relaxed. We had a memorable seafood meal in a restaurant tucked away in a narrow alley. The food took an hour-and-a-half to arrive at our table (island time) but it was gourmet. Prepared with love and care by the chef and owner, and served with a smile by his daughter. The island’s most famous son is the explorer Marco Polo born on Korcula in 1254. Once upon a time, wealthy merchants, skilled artisans, and master stonecutters, populated the island, which explains the intricate decorations that adorn the homes of old town Korcula. Spend two nights and a full day to kick back and appreciate the seductiveness and slow pulse of Korcula. 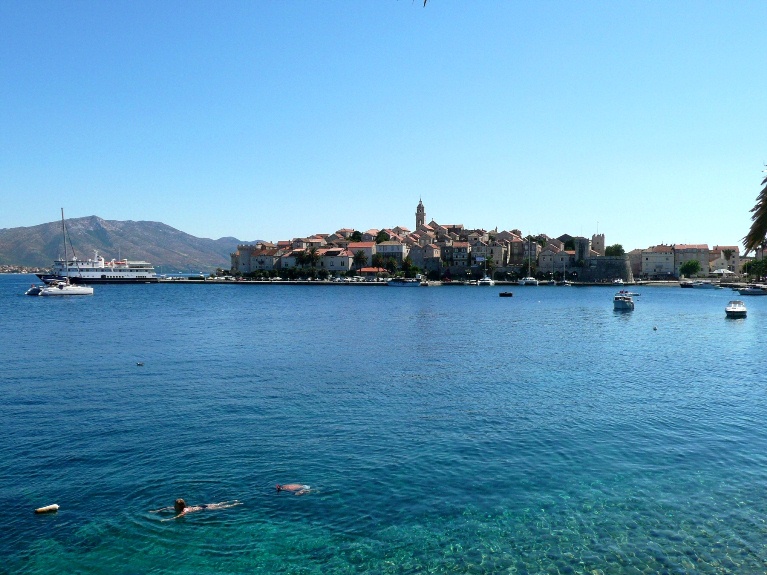 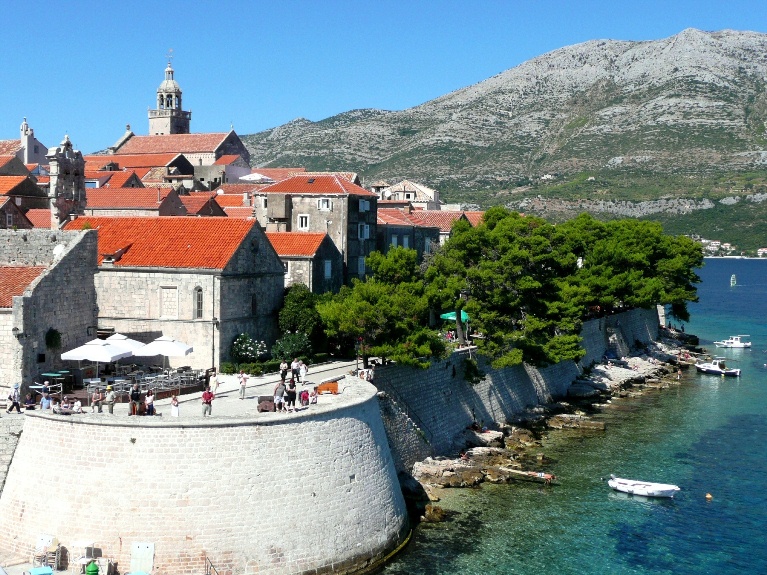 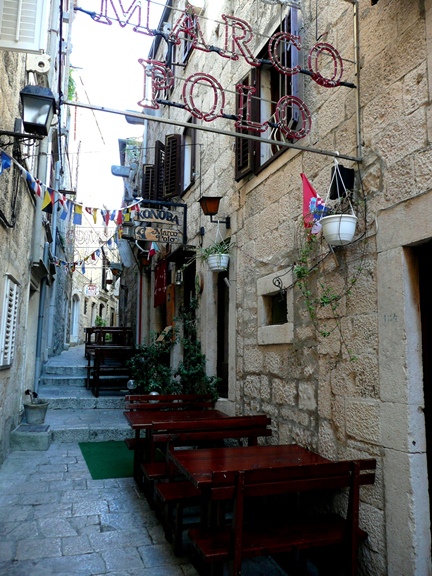 6) Isla del Sol – Bolivia: Isla del Sol, is steeped in ancient Inca traditions and folklore. It is said that it was here that Manco Capac and Mama Ocllo (the Adam and Eve of the Inca’s) were created by the Sun god. It’s dotted with Inca ruins; the sacred Inca well, known as the Fountain of Youth, still receives an endless flow of visitors; and the farming terraces – built centuries ago by the Inca, are still very much in use. In the early mornings the women dressed in their long skirts, lead their llama, alpaca, and goats out to the terraces, while their infants nestle contentedly in woven blankets strapped to their backs. There is no transport on the island which makes hiking along the steep pebbled paths the only option. Small hotels and home-stays in the community of Yumani offer charming and basic accommodation among the locals. While a more upscale and excellent choice, is the Posada del Inca, originally a hacienda, it has been remodeled into a small boutique hotel which commands a spectacular view of Lake Titicaca and the Andes. To get the most out of a visit to Isla del Sol, make sure to spend the night before moving on to La Paz in Bolivia or Puno in Peru. 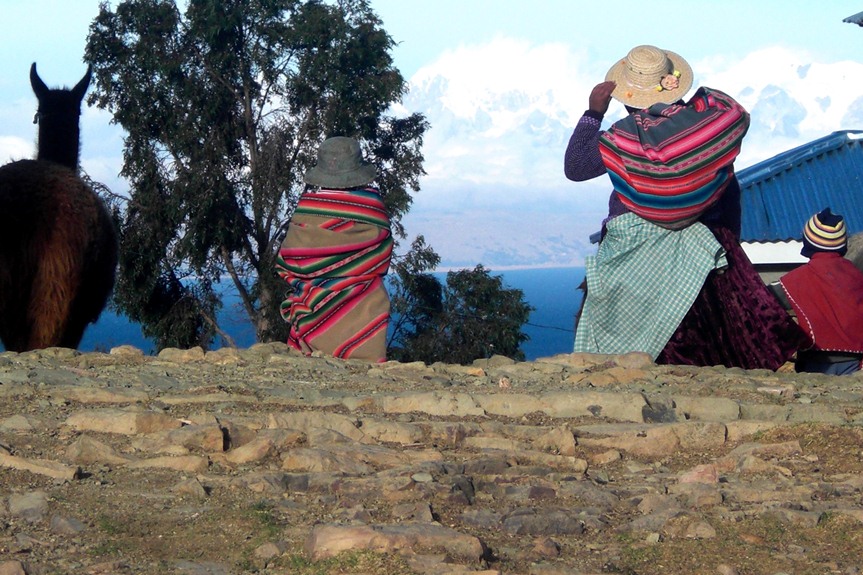 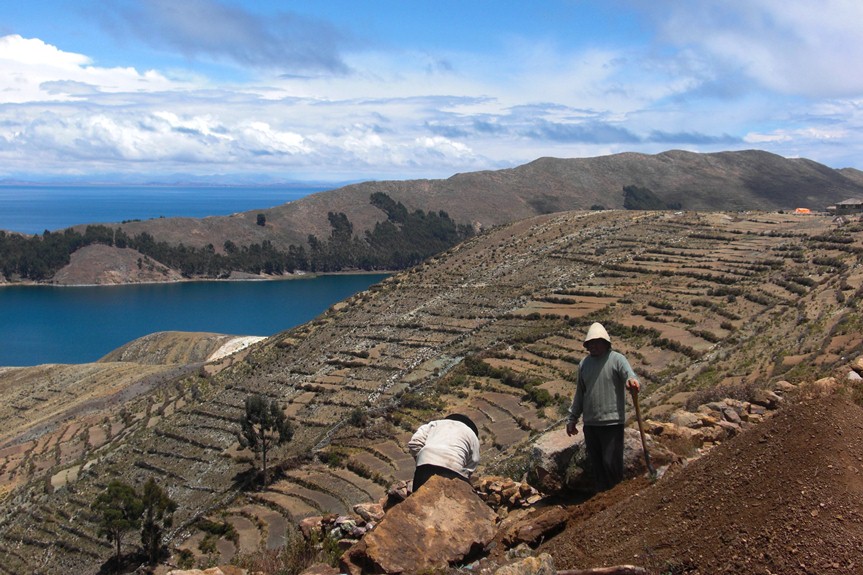 7) Robben Island – South Africa: Robben Island looks across the rough waters of the Atlantic Ocean at a magnificent view of Cape Town, which rests at the foot of majestic, Table Mountain. Robben Island, meaning Seal Island in Dutch, was named by the early Dutch settlers who were the first to use Robben Island as a prison in the 17 Century. The British also used it as a prison in the early 19th Century and as a leper colony in the mid 19th century. Under the South African apartheid government, Robben Island became a maximum security prison for political prisoners. Nelson Mandela spent 18 of his 27 years of imprisonment on Robben Island. A bus and walking tour led by former prisoners of Robben Island, take the visitor on a comprehensive tour of the prison yards; Mandela’s tiny cell; past the cottage of Robert Sobukuye, the first President of the Pan African Congress who was banned from speaking to anyone on Robben Island ; and to the quarries, where the prisoners broke rocks and extracted lime, in the glaring, harsh, Cape sun, for hours on end. Today, near the entrance to the quarry, stands a tall pile of small rocks. Nelson Mandela laid down the first rock during a reunion in 1995 of former political prisoners to Robben Island. A simple, but poignant and powerful reminder of the years of hardship and deprivation, which they endured. 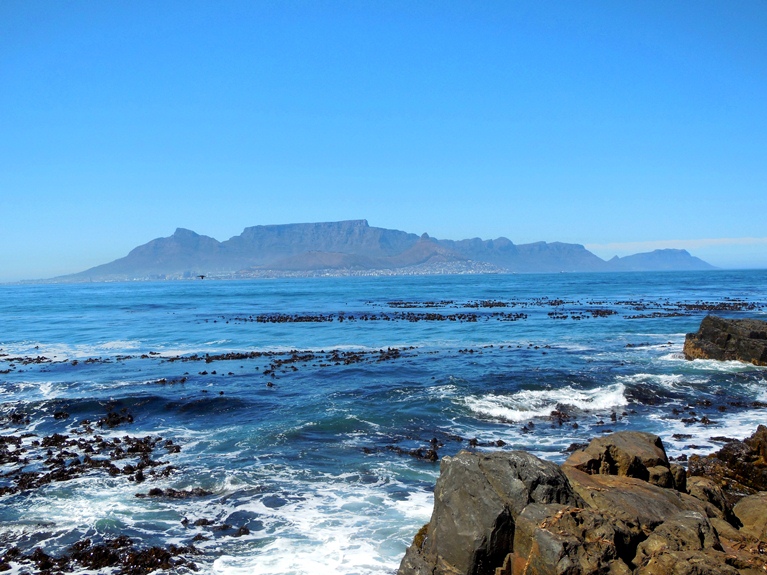 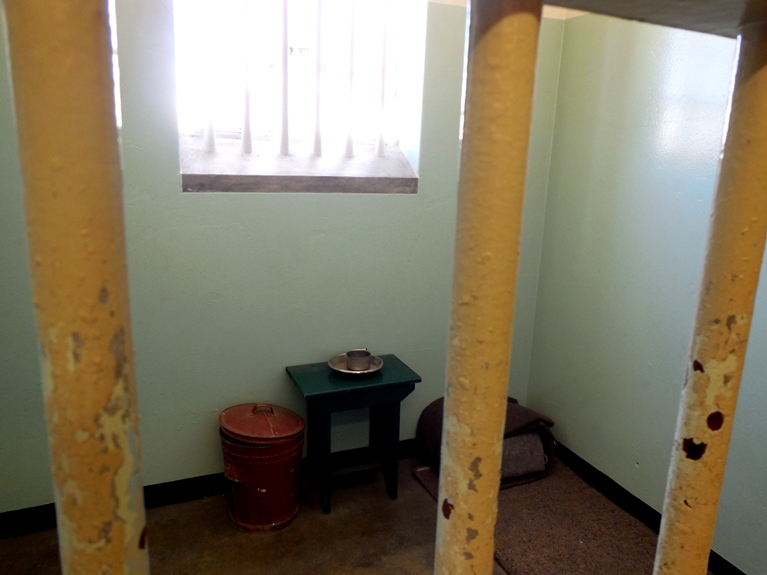 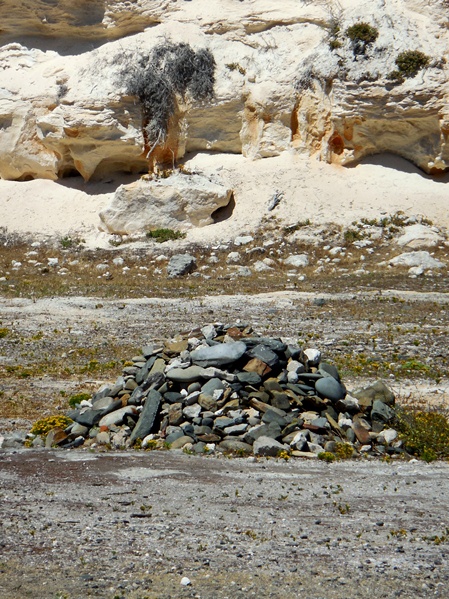 8) The Galapagos – Ecuador: The Galapagos Islands formed by volcanic eruptions are far enough from any major city to have escaped occupation by humans on any significant scale. To the East of the islands, in Ecuador, are Quito, 1287 kms (768 miles) and Guayaquil, 1090 kms (677 miles) away, respectively. The best way to visit the islands is on a cruise ship, for anywhere from 4 to 14 days. I prefer a ship that carries no more than twenty visitors. First class ships provide excellent guides, naturalists, scuba, and snorkeling instructors. Serious scuba enthusiasts however, should book a tour on a dedicated dive boat. Stepping onto the islands, one immediately becomes aware that humans are the outsiders here. These islands are the domain of animals and birds that have no predators and therefore have no fear of humans. Blue footed boobies sit on their pale blue eggs; chicks waddle about; albatross plop awkwardly down as they come in to land, while their babies are like fluffy, cuddly, toys; iguanas laze on the rocks; curious seals will come right up to you; eagles, hawks, and frigates, perch on branches. In the ocean, seals will swim with you and peer at you through your mask. My most exhilrating experience was swimming beside a giant sea turtle, my arm resting on his shell. He would glance at me every so often as we swam together until I got so cold that I had to bid him farewell. It’s incredible that a place like the Galapagos still exists. We should make every effort to preserve these islands. They are a natural treasure. 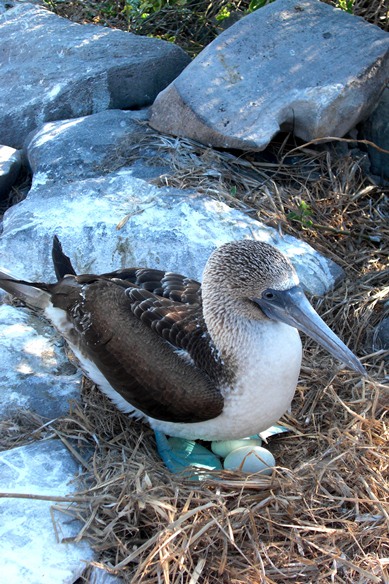 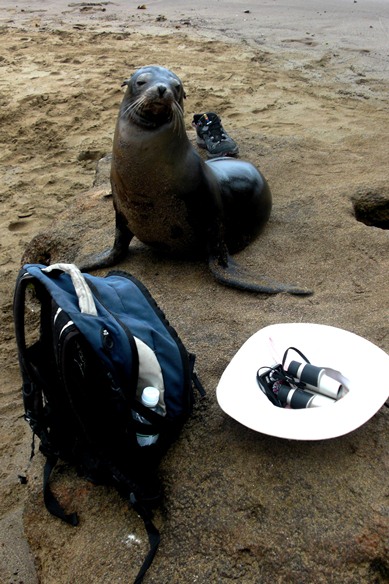 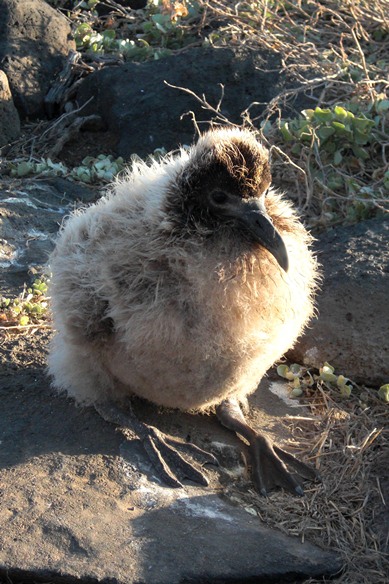 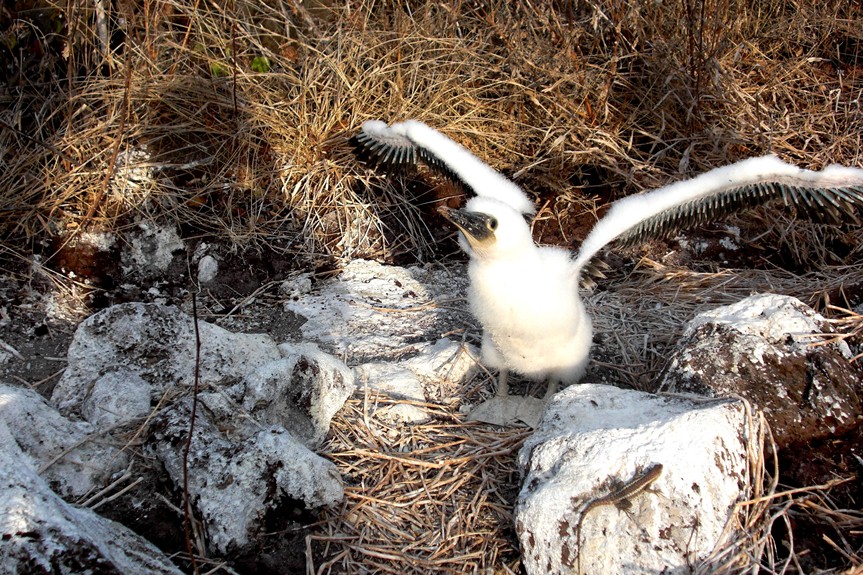 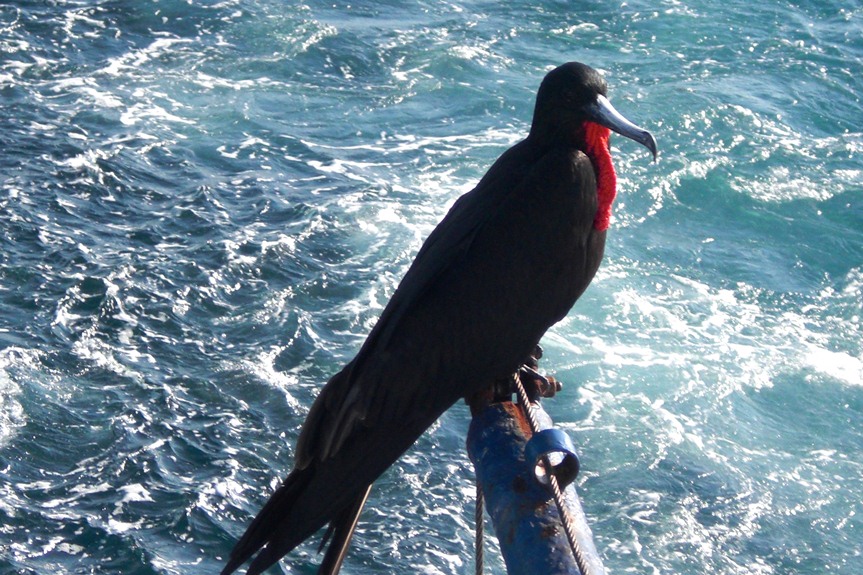 9) Rabbit Island – St. Petersburg – Russia: Rabbit Island lies across a causeway connected to the city of St. Petersburg. Legend has it, that a rabbit jumped onto the boot of Czar Peter the Great as he set foot on the island; hence the name Rabbit Island. It was on Rabbit Island that the grand city of St. Petersburg was established. The St.Peter and St.Paul fortress was built on the island to accommodate military regiments; however, it was subsequently turned into the Political Prison of Russia. The acclaimed Russian writer Dostoevsky – author of Crime and Punishment, was imprisoned in the fortress. Within the fortress stands the St. Peter and Paul Cathedral, a Russian Orthodox Church. While the exterior is not particularly impressive, the interior has a magnificent golden altar, and mosaic icons that are so fine and detailed that unless viewed up close they appear to be paintings. The tombs of all the Romanov Czars, from Peter the Great to the last Czar, Nicholas II, rest within the cathedral. 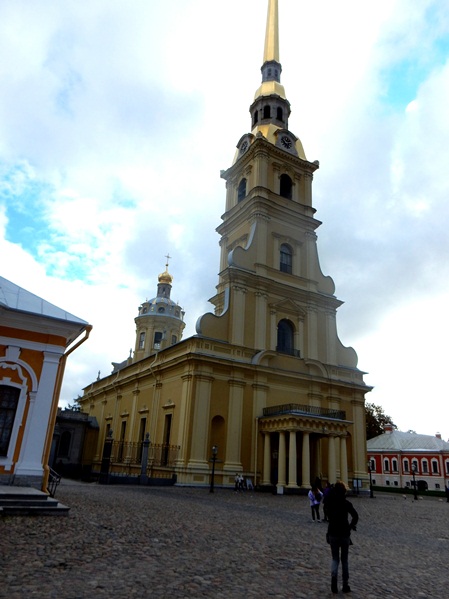 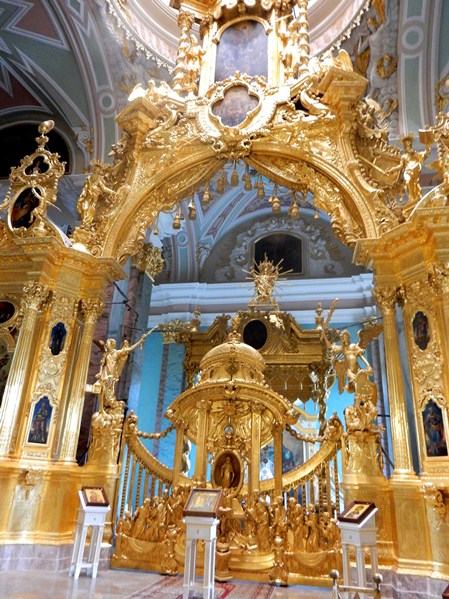 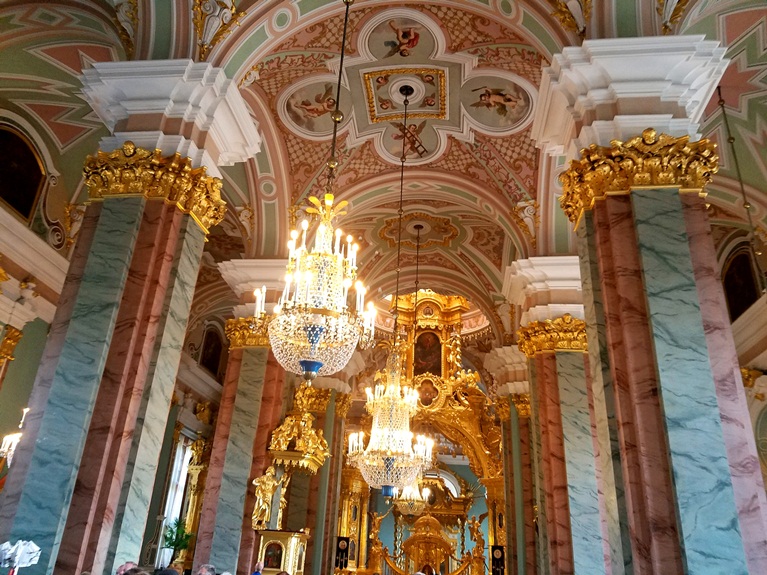 10) Koh Phi Phi – Thailand: Koh Phi Phi is everything one would imagine an idyllic island to be. The water is warm and turquoise blue, fragrant magnolia trees line the beaches, the village is stacked with coffee shops, bars, restaurants, and dive shops that sit shoulder to shoulder on the waterfront and along the pedestrian only walkways. When one wants to escape the non-stop action of beautiful Tonsai Bay, which nestles below limestone cliffs cloaked in greenery, a five-minute walk across the ‘barbell of the island, delivers one to quiet Loh Dalani Bay. Hire a boat driver and go snorkeling at Monkey Beach, relax at idyllic Loh Lana Bay, and visit Maya Bay which is breathtakingly beautiful but crowded. To find the most gorgeous and unspoiled part of Koh Phi Phi ask someone to point you in the direction of Long Beach, then walk along the beach in Tonsai Bay and where the beach ends climb the steps and walk through the forest of banyan trees and fig trees and just keep going. You’ll discover Shangri-la! 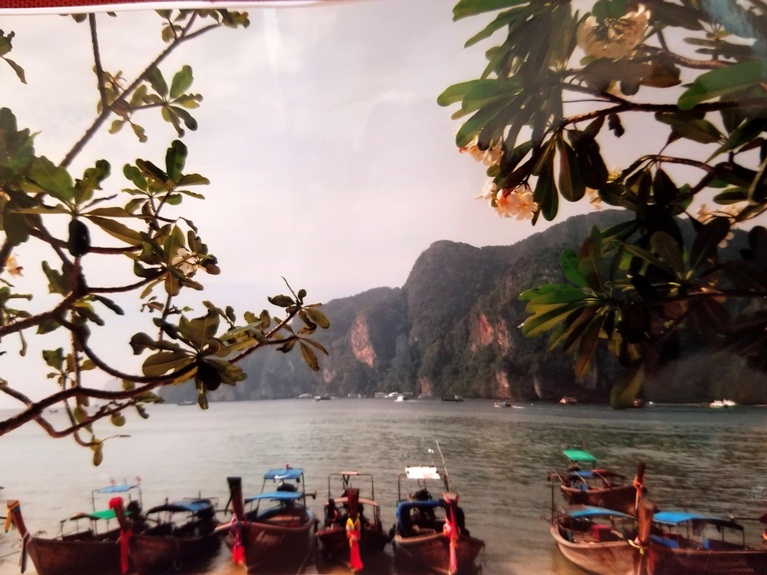 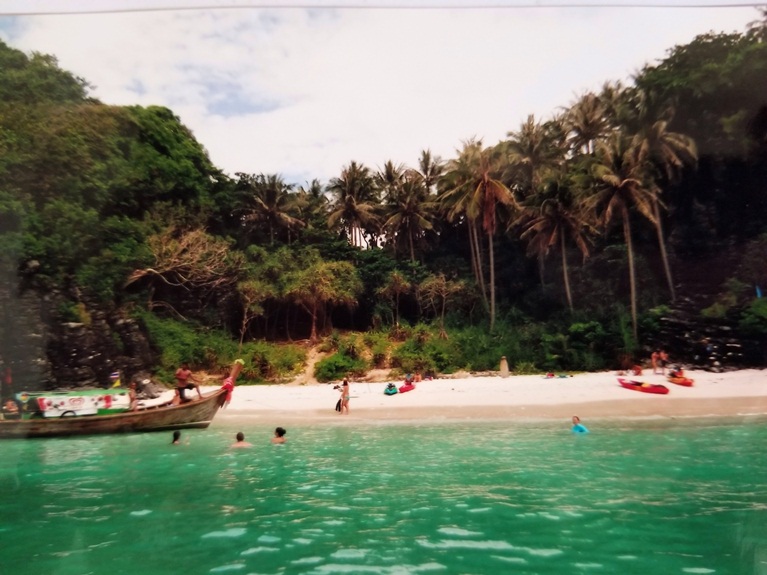 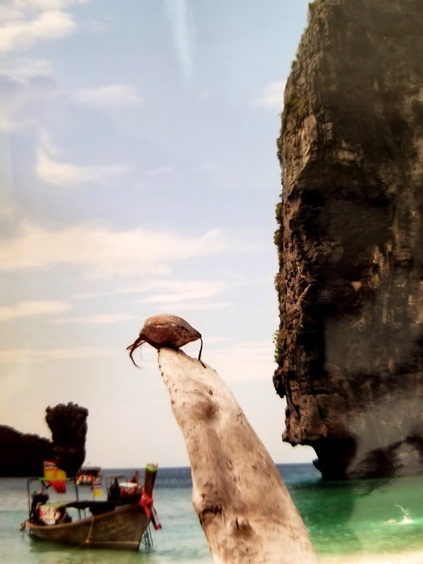 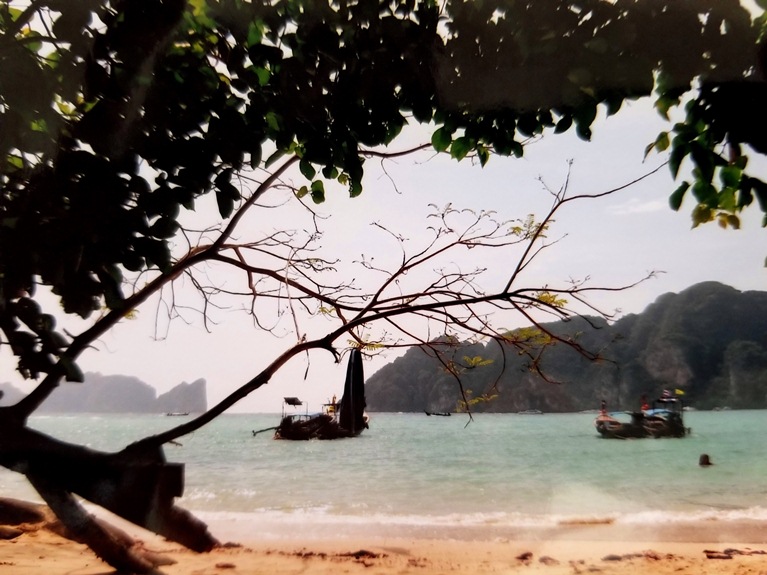 Check in to read my next TOP 10: Top Ten Natural Wonders