Arequipa, the second largest city in Peru, is raved about as being the most beautiful of all the Peruvian cities.  We flew in over a barren, treeless, dusty city that reminded me of Tucson, Arizona.  Not what we’d expected!

Our hotel was a gorgeous Spanish Colonial house – Casa Arequipa – which has 14 suites and has been lovingly converted into a boutique hotel.  A glass enclosed rooftop dining room where breakfast is served, also serves up a spectacular view of two snow capped volcanoes:  Chachani and Misti.

Our first walk to the center of the Old City took us through the main Plaza – Plaza de Armas – dominated by an immense cathedral built out of the white volcanic rock for which Arequipa is famous.  In search of somewhere to have a late breakfast, we followed directions to the pedestrian street where the first sight to greet us was MacDonald’s, then three doors farther we came across  Starbucks, Kentucky Fried Chicken and Pizza Hut!  Horror of horrors!  Score 0 out of 10 Arequipa!

Fortunately in the days to come Arequipa redeemed itself.  We discovered restaurants where the food was superb and the presentation sublime.  We spent an entire afternoon criss-crossing the city, map in hand, in search of the most beautiful 16th and 17th Century homes and monasteries, all of which are beautifully restored and open to the public.  Several of them now house banks, university faculties, and restaurants. Others have been preserved as museums, and the monastery with magnificent cloisters adjoining La Compañia church, now houses boutiques selling baby alpaca clothing, several gourmet restaurants, art galleries, gourmet chocolate stores, and vibey coffee shops – perfect spots for sipping cappuccino and people watching. 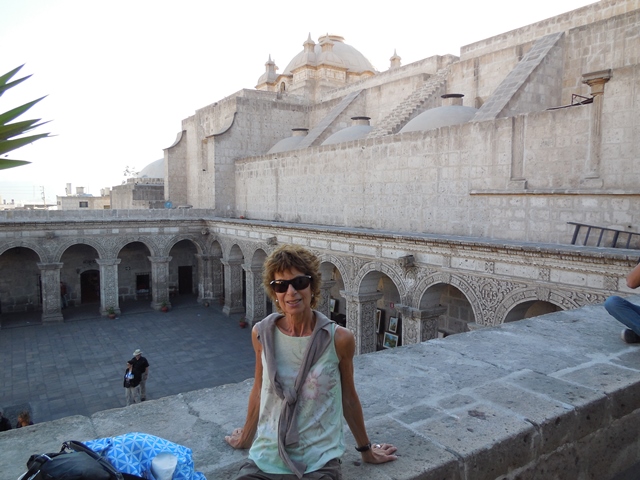 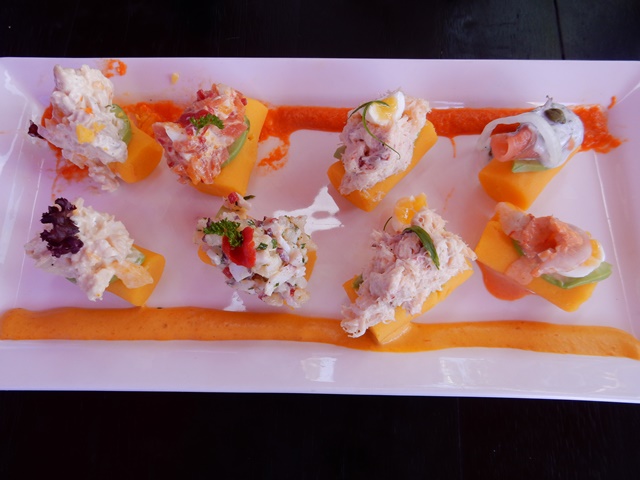 All these stately ‘palacios’ and ‘casas’ are built out of white volcanic rock, their entrances display the original family’s coat of arms carved above the doorways, wooden front doors bearing bronze studs soar 20 feet in height, and the entryways are wide enough to accommodate horse drawn carriages. 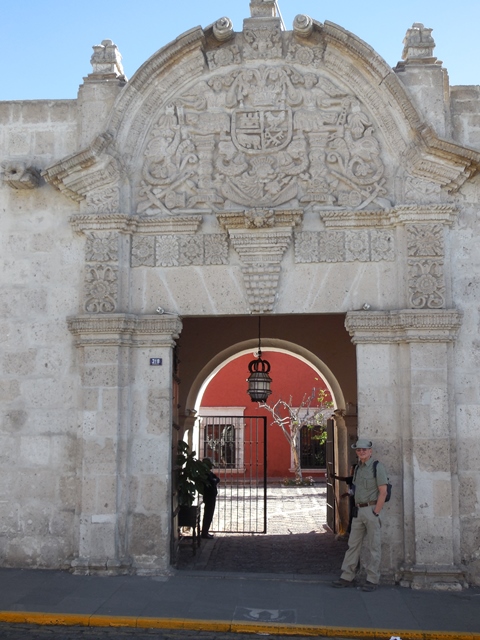 The convent of Santa Catalina founded in 1540, which occupies several city blocks, is not to be missed.  Resembling a storybook village lifted straight out of Andalusia- Spain, it’s a maze of cloisters, courtyards, fountains and narrow cobble stone streets, some lined with terra cotta colored cottages, others with cottages built from white volcanic rock.  Fragrant orange trees, and pots spilling over with geraniums provide bursts of color.  The lavanderia (laundry area) lies beneath shady trees in tranquil gardens where the silence is broken only by the chirping and singing of birds.  A narrow stone water channel carries water to the rows of enormous terra cotta clay pots that have been sliced in half to create perfect oval wash sinks.  The scene is so idyllic that it almost inspires one to roll up ones sleeves and get busy doing some laundry. 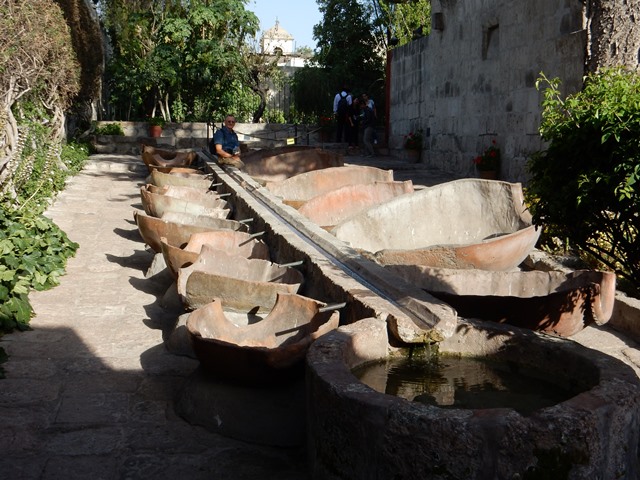 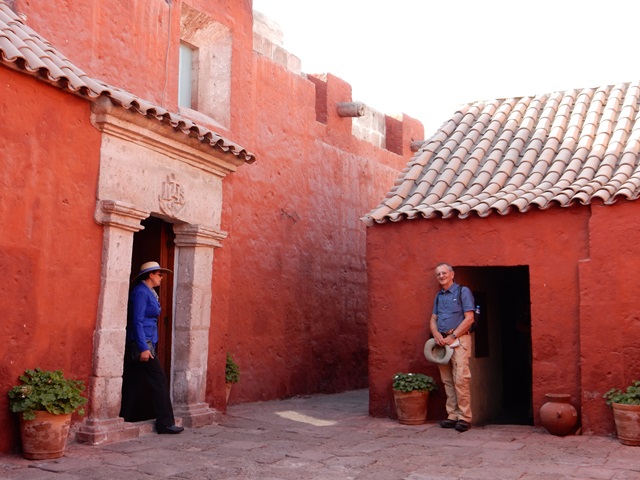 The majority of the nuns who came to live in the monastery came from wealthy homes and brought with them beautiful items of furniture, pianos, harps, hand woven rugs, silver, fine clothes and believe it or not- their servants!  They paid substantial dowries to enter the convent where they were isolated from the outside world but led a life of luxury. 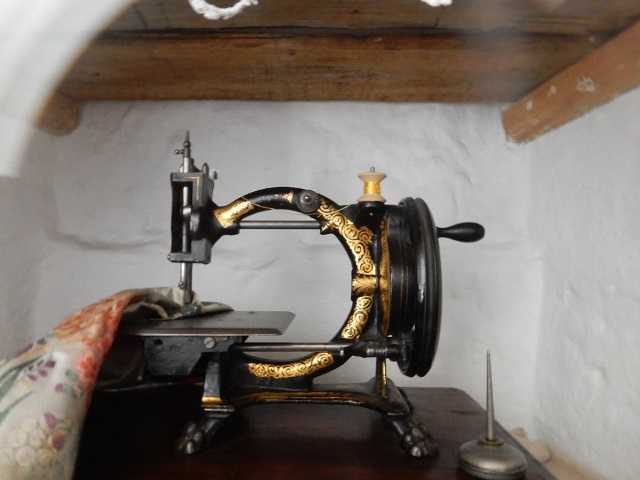 In the 19th Century a Dominican nun took charge and ended the pampering and partying.

The highlight of our stay in Arequipa was a morning spent at the museum where Juanita, the Ampato maiden resides in her frozen state.

The Spanish had chronicled the Inca tradition of offering humans to the gods, who they believed resided in the peak of the Apus (holy mountains).  When a volcano erupted, it meant that the gods were angry and had to be appeased.  Children from elite families were selected at birth to one day become sacred offerings.  This was considered a great honor, as it was believed that they would live with the gods and they themselves be deified.

In 1995, the volcano Sabancaya – which stands beside the dormant volcano Ampato – erupted.  The heat from the volcanic eruption melted the ice and snow at the tip of Ampato and an expedition led by archaeologist Johan Reinhard – set out immediately to see if they could uncover evidence of human sacrifices.  In the dormant crater of Ampato volcano they found a large frozen bundle.  Scientists and pathologists spent hundreds of hours working around the clock to painstakingly uncover the body of a young girl around 13 years of age in perfect condition.  Her hair, skin, nails, muscles, clothing, jewelry, small clay pots and three miniature figurines- which she carried with her as offering to the gods – were all perfectly intact.  In her cloth purse they found coca leaves used to ward off altitude sickness, a lock of hair from her first haircut and her umbilical cord.  The Inca always froze the umbilical cord when a child was born.  In the event that the child took ill in later years, pieces of the umbilical cord were fed to the sick child as a medicinal remedy.

Because the young girl’s body most likely froze within minutes of death – it had remained perfectly preserved for over 500 years.  Subsequently 17 more bodies of children were uncovered.  The Ampato maiden now resides at the museum in Arequipa in a display case, where her body is preserved at the same temperature as the ice capped pinnacle of the volcano.