Lake Tiberias, which nature created in a shape reminiscent of a violin, is fondly referred to as “The Kinneret” by Israelis. It’s the lowest freshwater lake on earth at 209 meters below sea level. In the lively town of Tiberias, boats bob in the marina, and the seafront promenade is dotted with restaurants and hotels overlooking the beaches.

Named after the Roman Emperor Tiberius, its history is of importance to both Jews and Christians. After the Roman destruction of the temple in Jerusalem, Jews migrated to Tiberias, which became a religious center from the 2nd– the 5th century CE. It was there that the Talmud – the written version of Jewish oral law and commentary – was compiled.

During the Byzantine period, Jesus is said to have preached on the shores of the Sea of Galilee, walked on water, and performed the Miracle of the Loaves and Fish when 5,000 hungry people were fed with five loaves of bread and two fish. 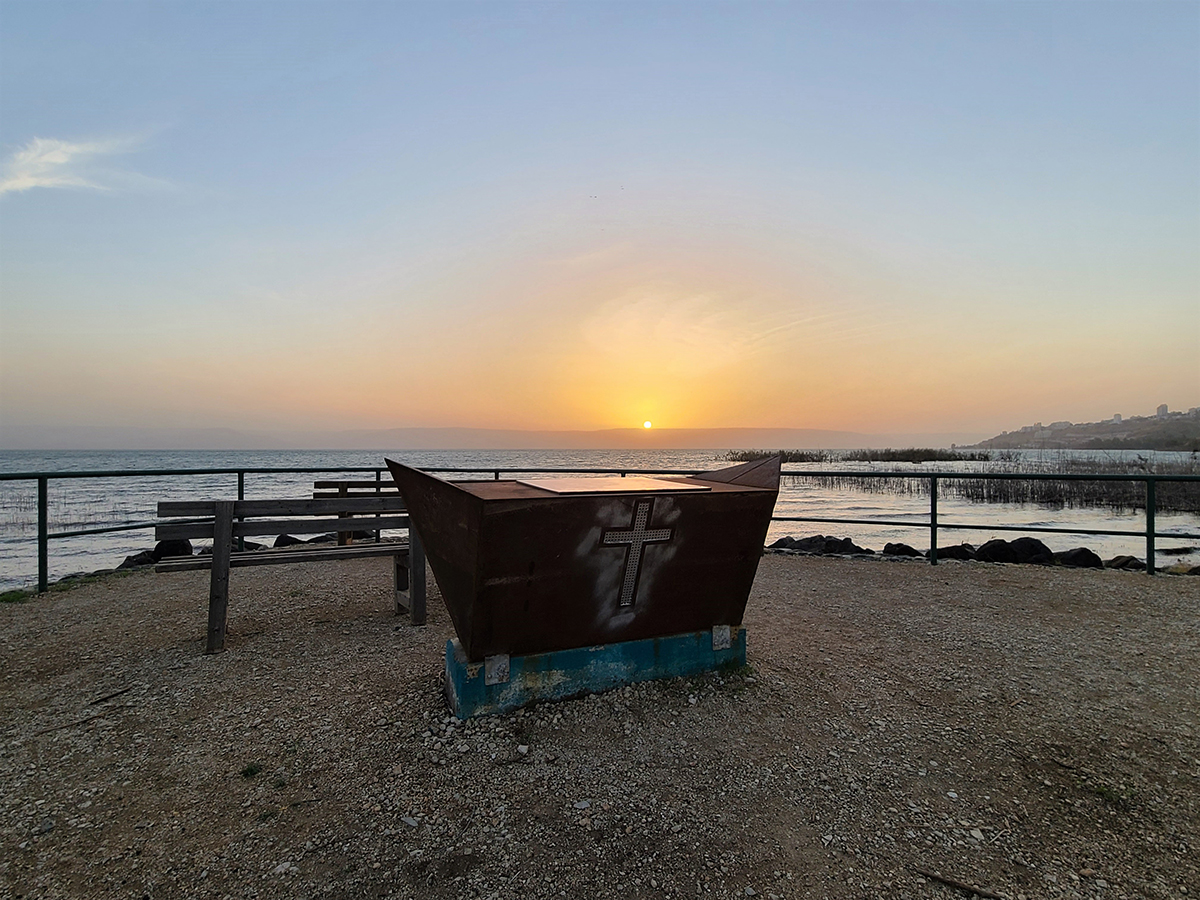 The banks of Lake Tiberias are home to several unique churches, both ancient and new, which attract a constant stream of visitors year-round. Among them are The Church of the Loaves and Fish in Tabgha, which is a Roman Catholic Church built on the site of a fourth, and subsequently fifth century, Byzantine Church; St. Peter’s Church; The Greek Orthodox Church of the Twelve Apostles, where the interior walls are adorned with beautiful frescoes; The Church of Mary; and the most recent, Duc In Altum Church in Migdal, the town that is believed to have been the birthplace of Mary Magdalene. 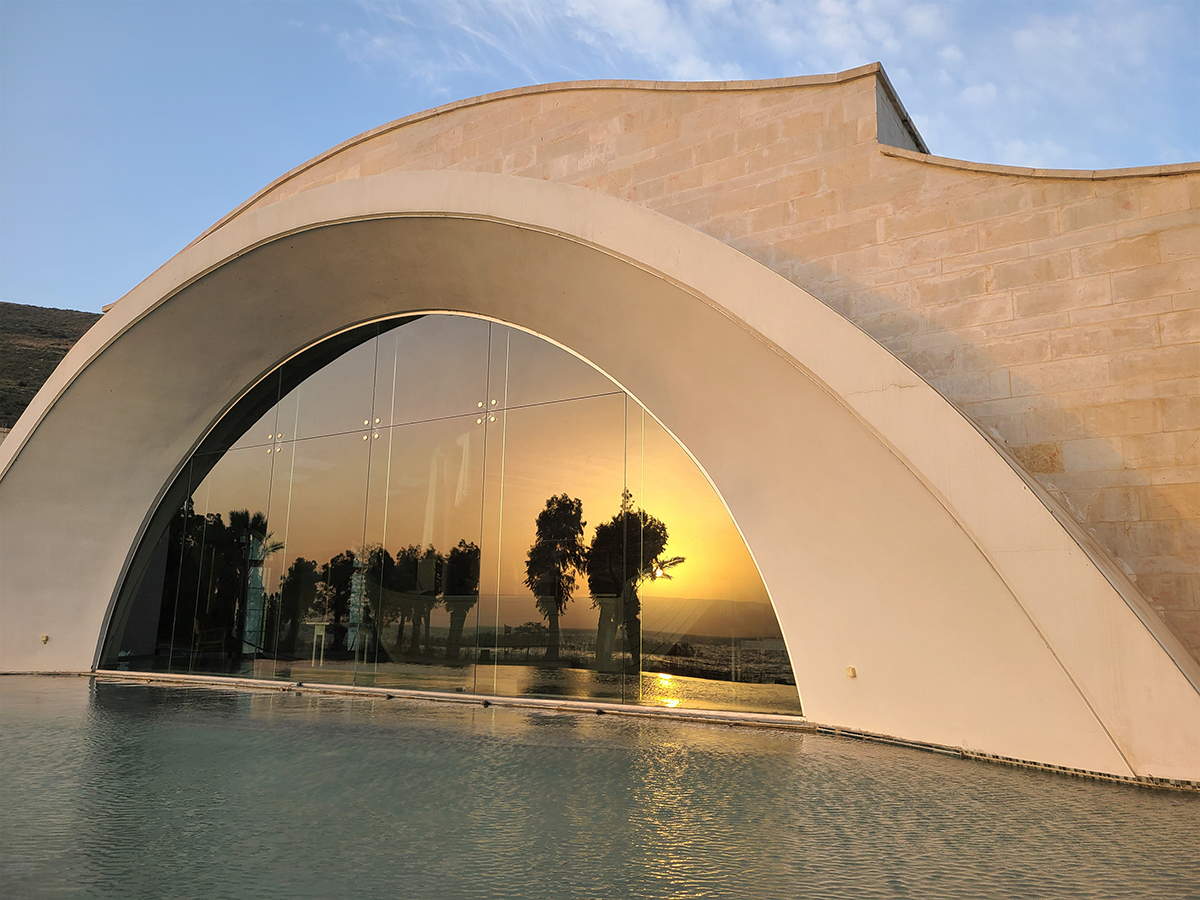 Duc In Altum: The sunrise is reflected in the glass window of the church.

The decision of where to locate both the church and the Magdala Hotel is an interesting story, though given that Israel is rich in archaeological discoveries, it’s not unusual. In 2009, building contractors began digging the foundations of a hotel and church close to the shores of the Sea of Galilee, which led to the discovery of ancient structures buried deep below the surface. Digging came to a halt, and the perimeters of the new construction had to be redrawn.

From 2009 to 2019, archaeologists and historians painstakingly excavated the site, revealing not only a synagogue but streets, coins, glass objects, ceramic vessels, and fishing weights. In one area, walls and materials were uncovered dating back to the Hellenistic period between 332-63 BCE. 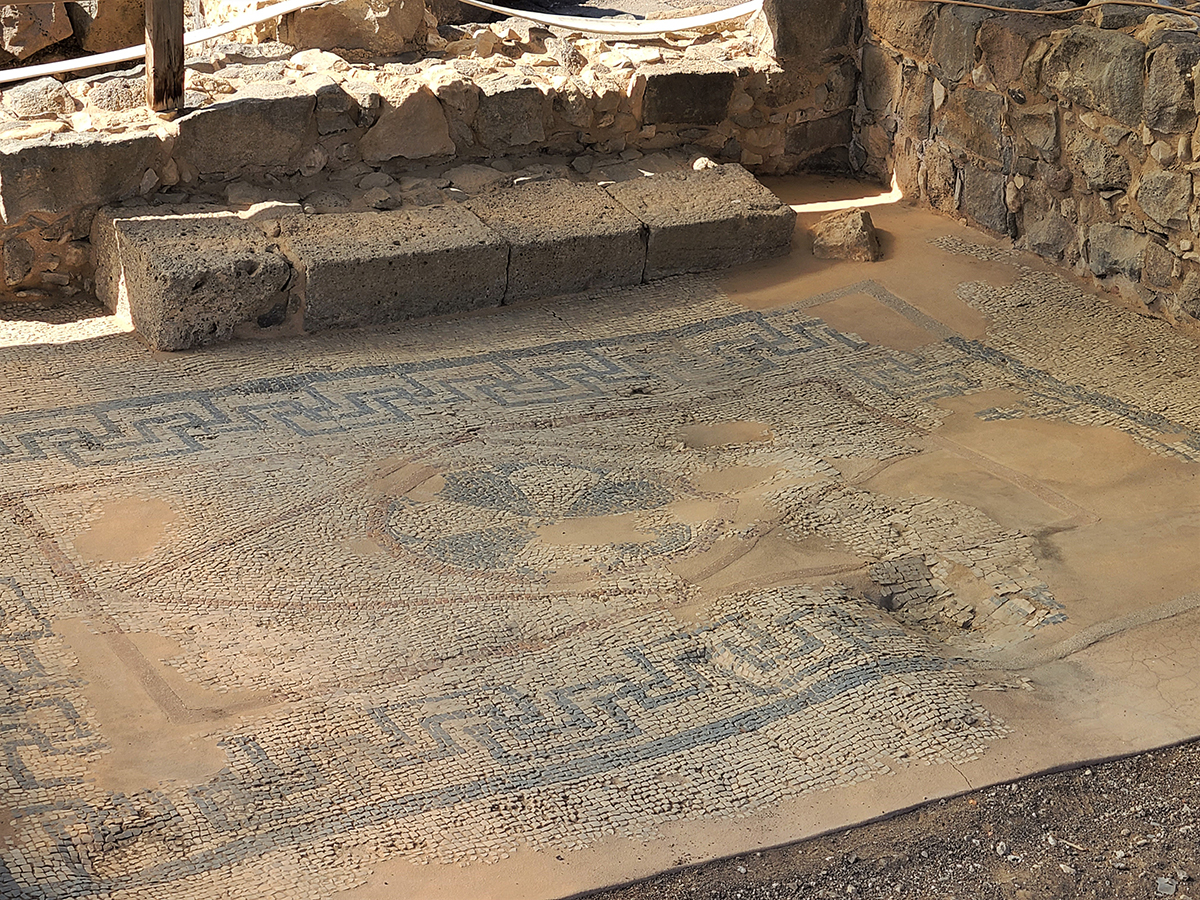 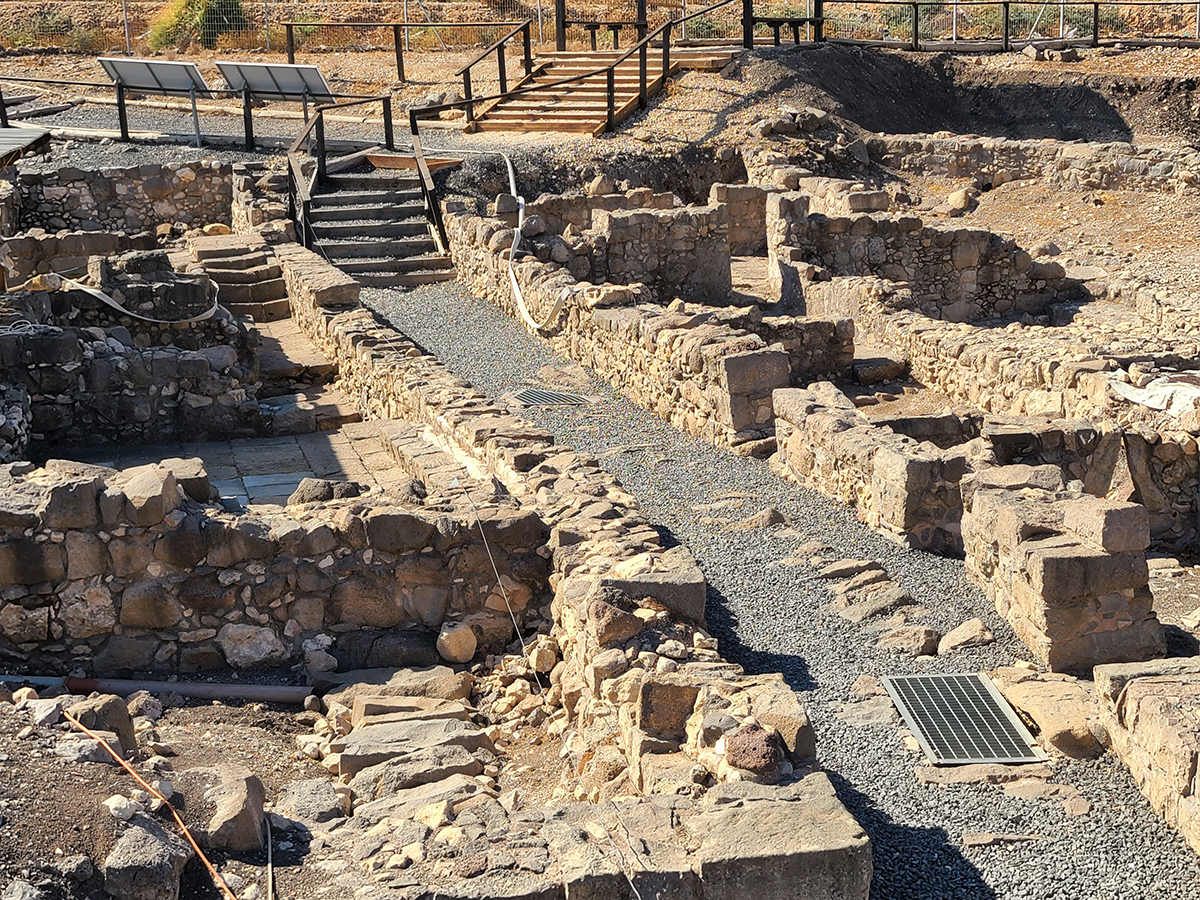 In late 2021 another synagogue beside the current freeway was discovered, which led to the conclusion that this must have been a significant town with a large population and a thriving Jewish community. Historians believe that Jesus and Mary Magdalene could have frequented these synagogues 2000 years ago.

The historian Josephus (Joseph Ben Matthias) recorded that Magdala had a population of forty thousand people and a fishing fleet in excess of two hundred vessels.

Spend a night at the Magdala Hotel, where you have views of the archaeological excavations through the glass windows of the lobby; take a guided tour of this incredible historical discovery; wake up early and watch the sun rise over the Kinneret; then indulge in an unforgettable buffet breakfast. 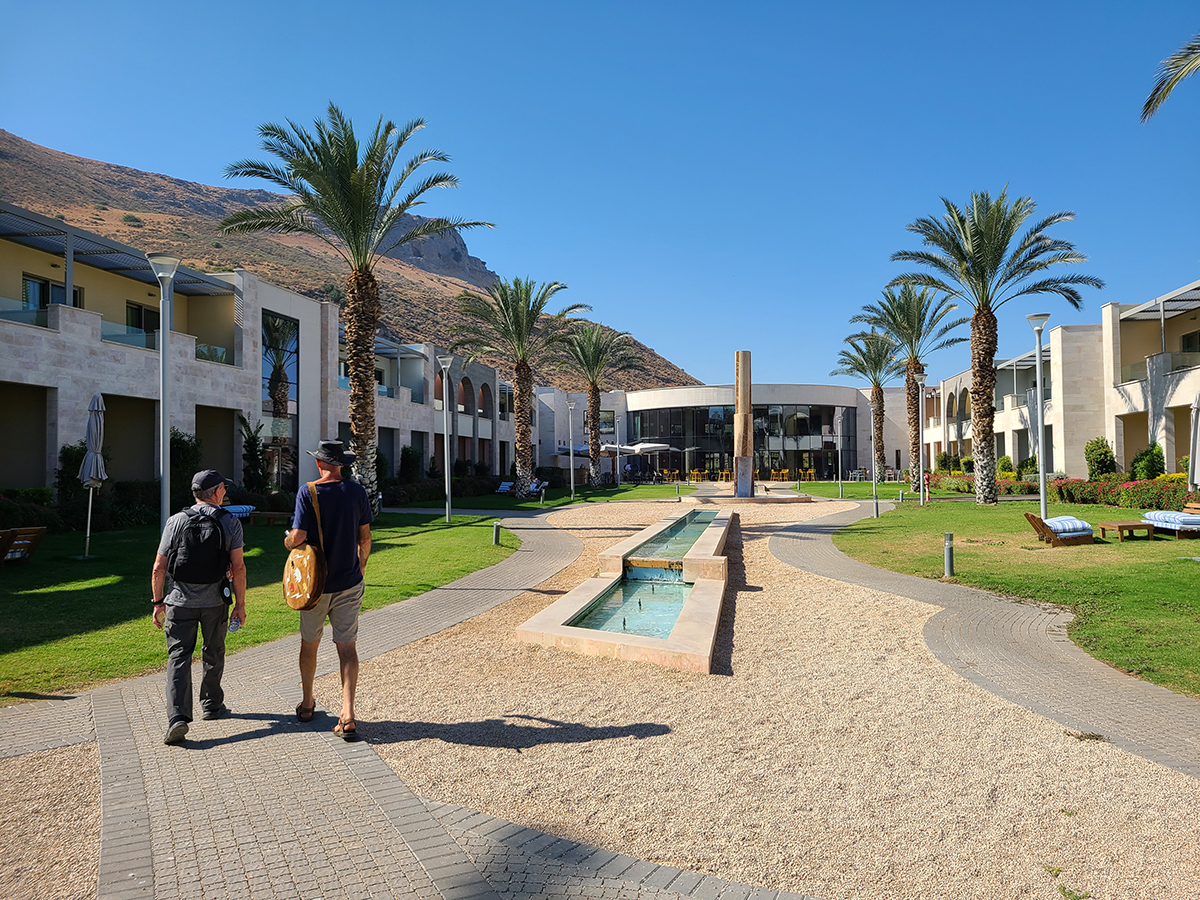 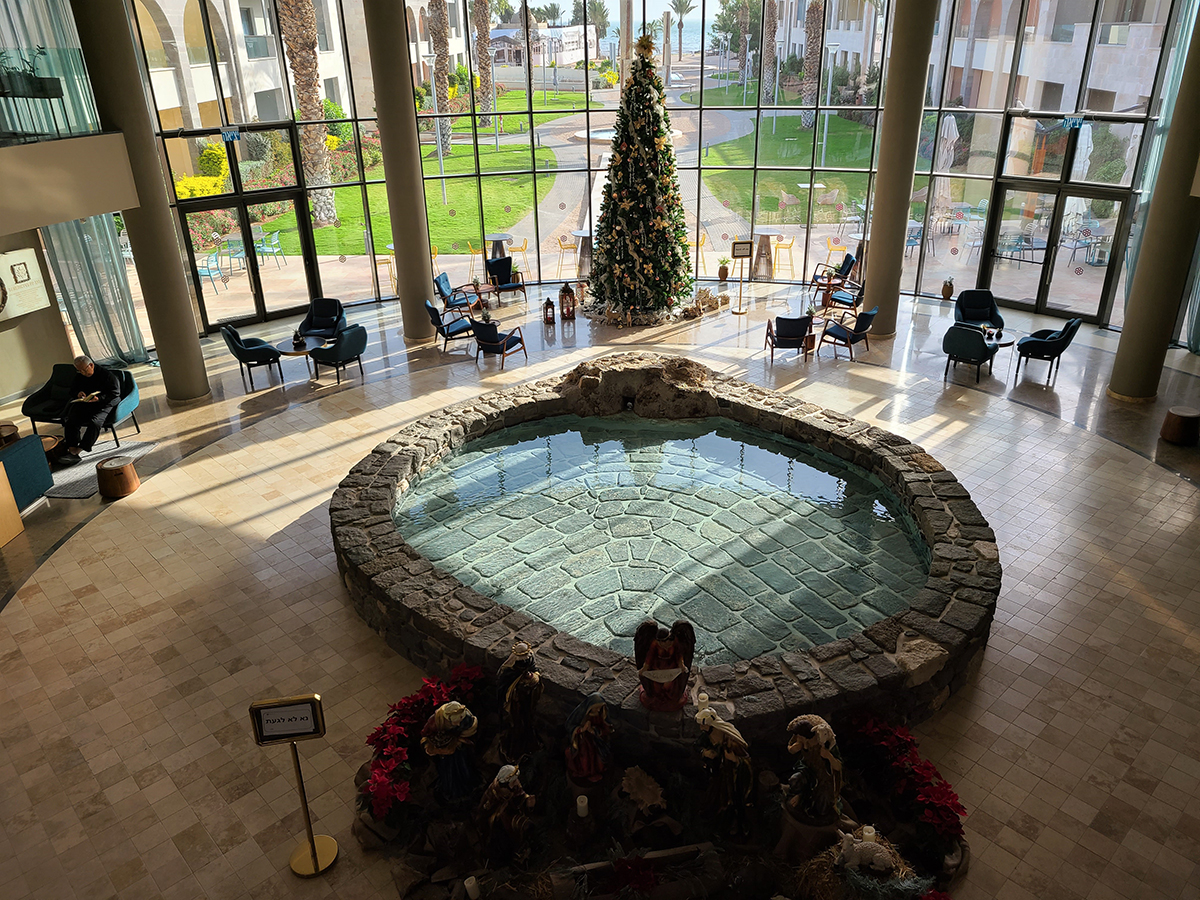 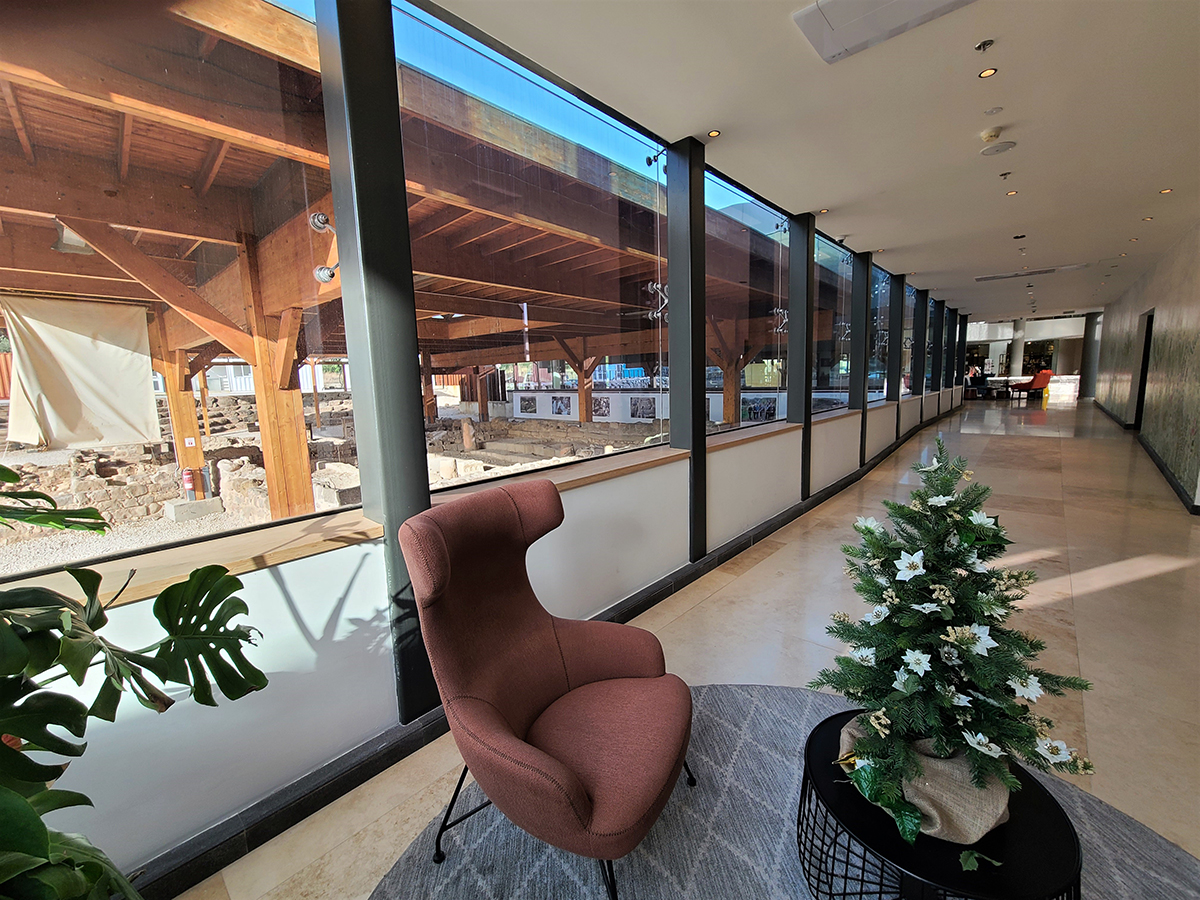 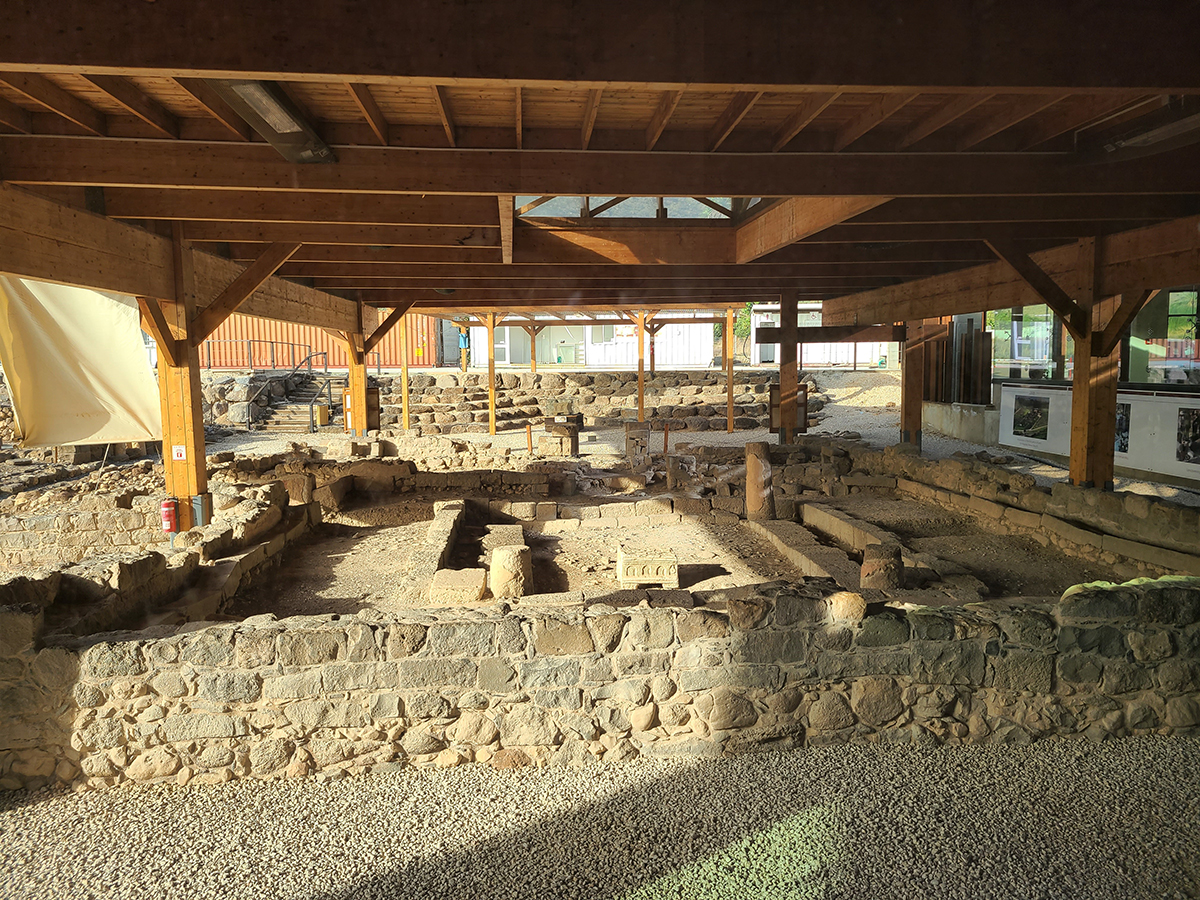 After breakfast, visit Duc In Altum, where the pulpit – shaped like a boat – seems to be floating on the waters of the lake; and the Four Mosaic Chapels created from Italian marble, depict biblical events that took place on the Sea of Galilee. 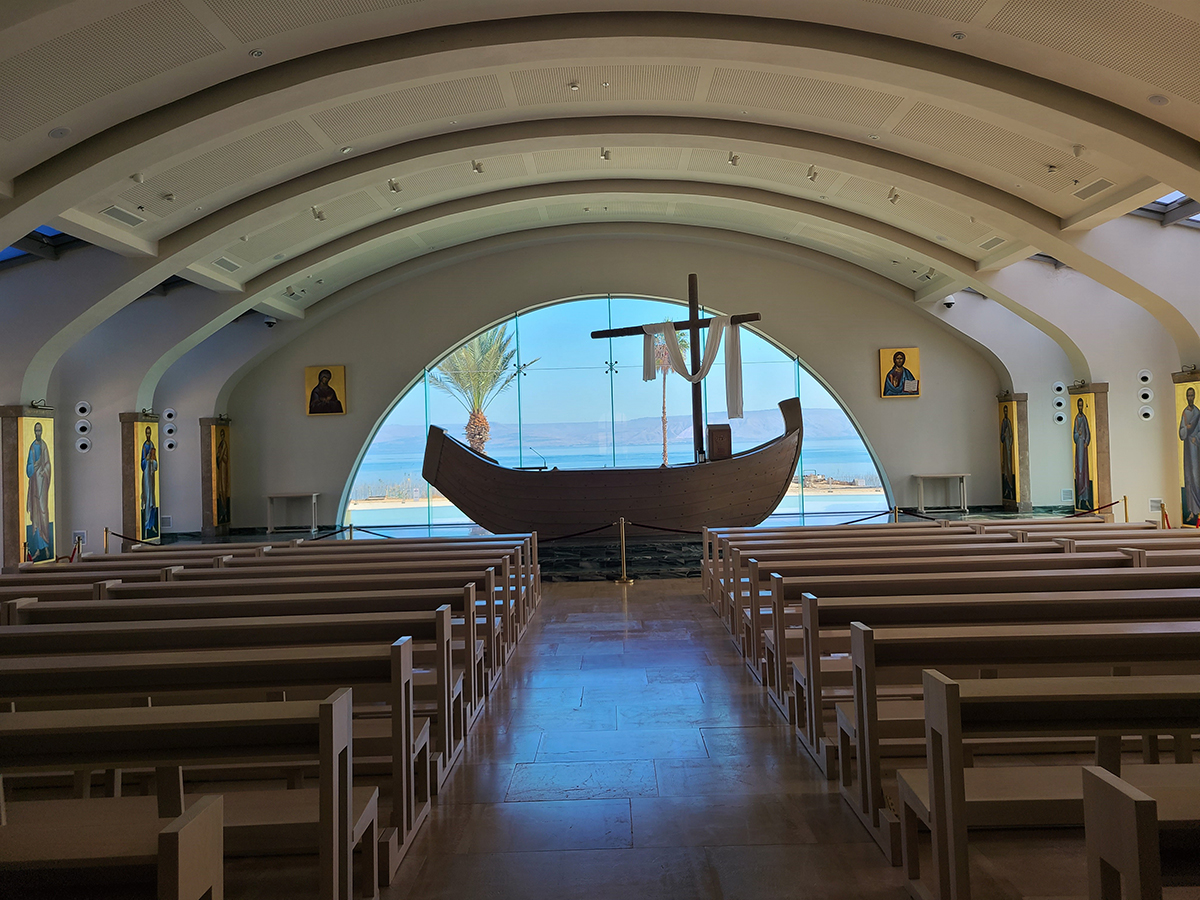 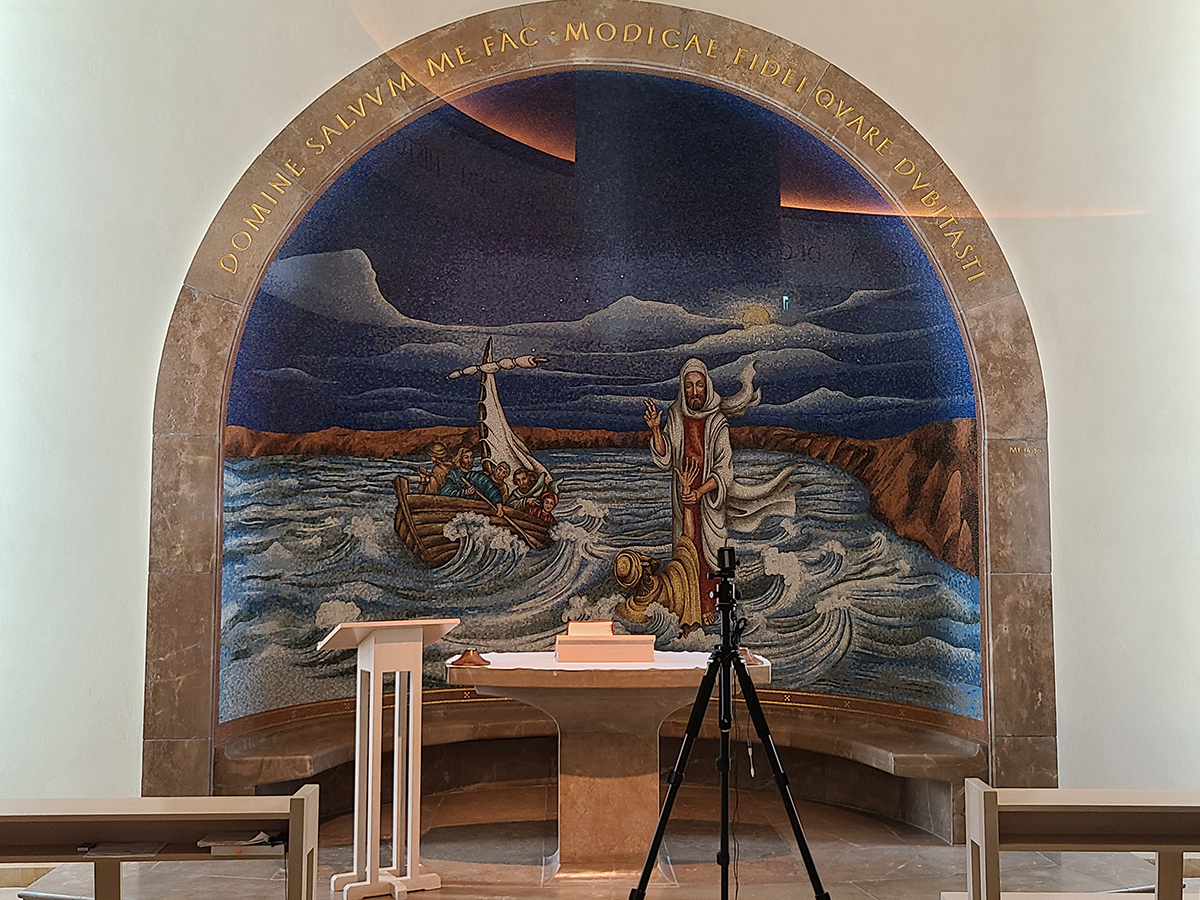 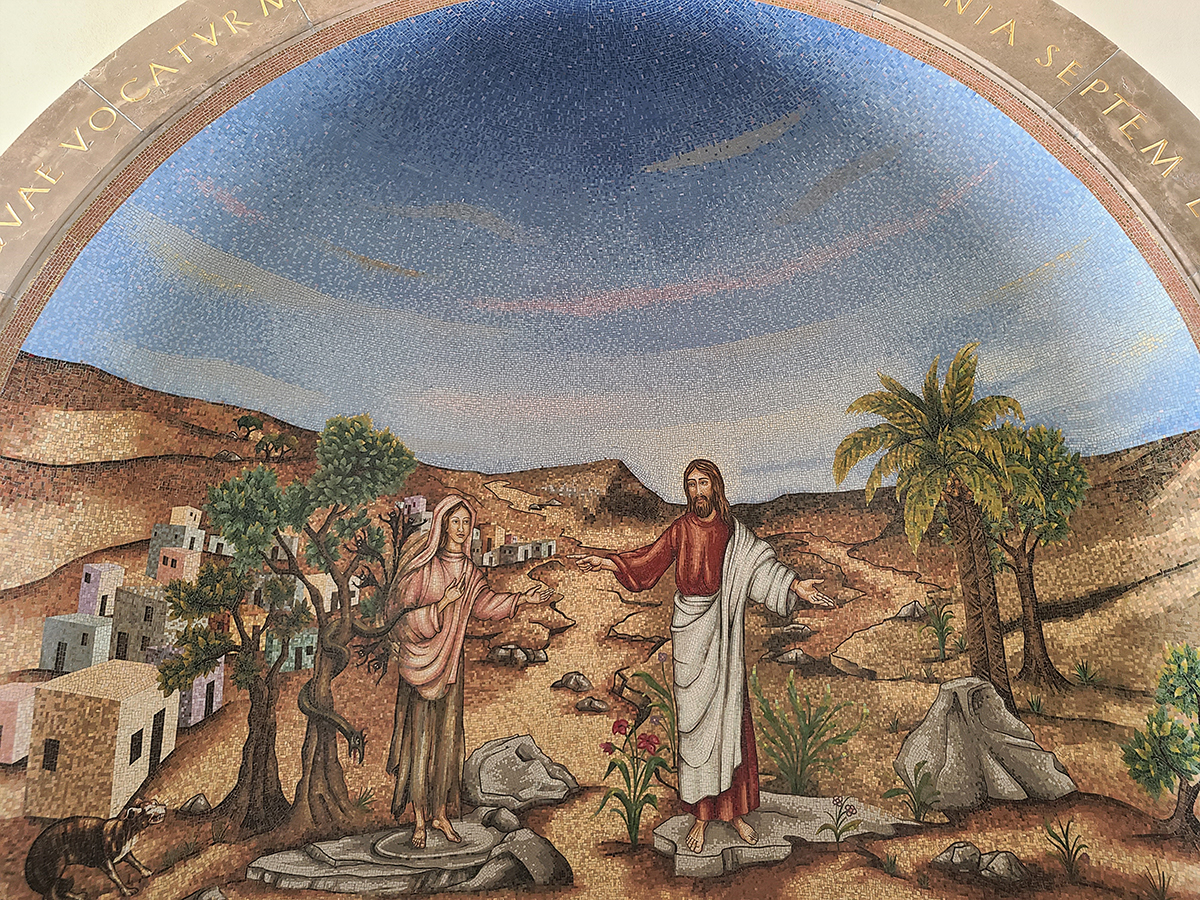 Don’t miss the underground chapel modeled after the excavated 1st-century synagogue. It stands on the original marketplace floor. A wall painting of the hemorrhaging woman who reaches out to touch the hem of Jesus’ robe is a magnificent and moving work of art. 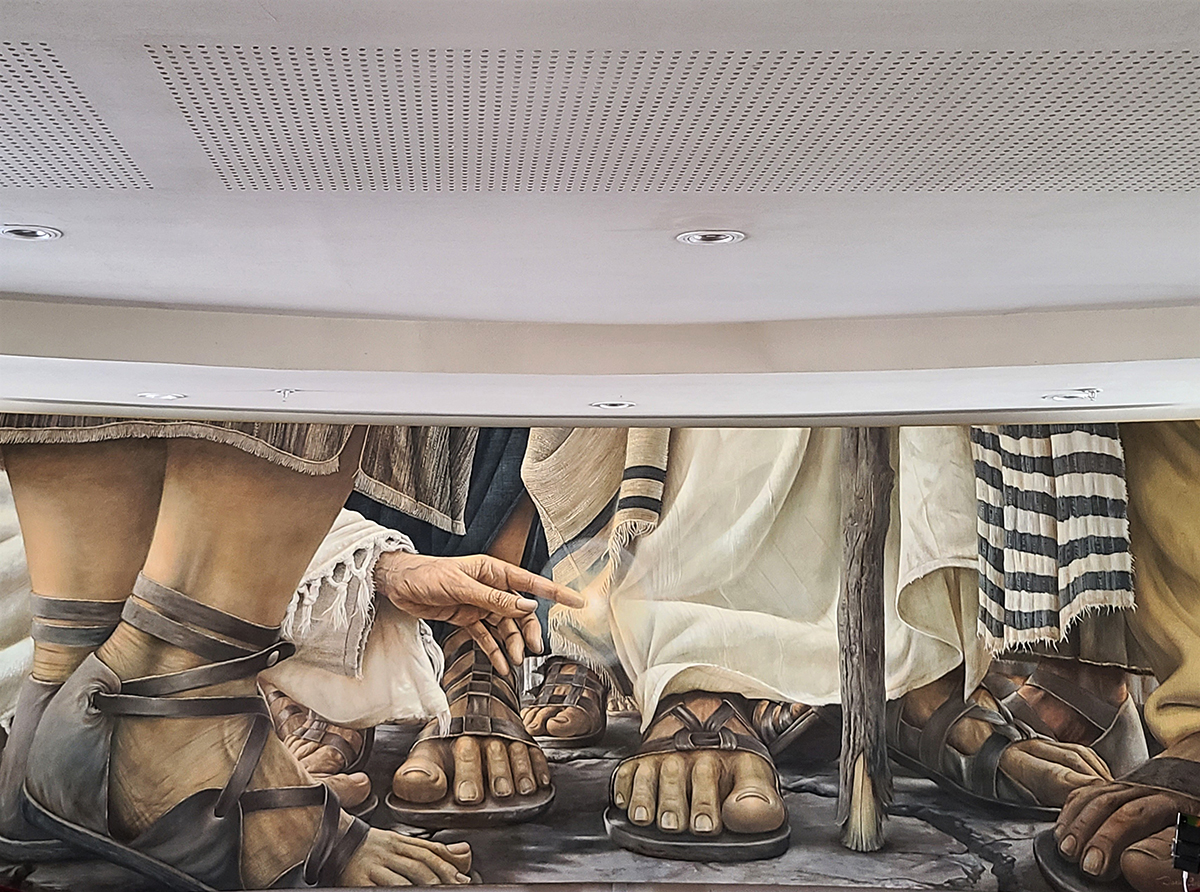 Ain Ayub – Job’s Spring on Highway 87 in Tabgha is well camouflaged. Park on the edge of the highway. It’s a short walk along a dirt path to Ain Ayub and the waterfall/spring on the beach below. According to biblical texts, Job was punished and tested by God, who afflicted him with severe skin sores for his sin of self-righteousness. He is believed to have lived in a cave nearby and treated his sores in the therapeutic sulfur waters of the spring. Job is mentioned in Judaism in the book of Ezekial, Islam in the Quran as a prophet, Christianity in the Epistle of James, and in the Baha’i faith. 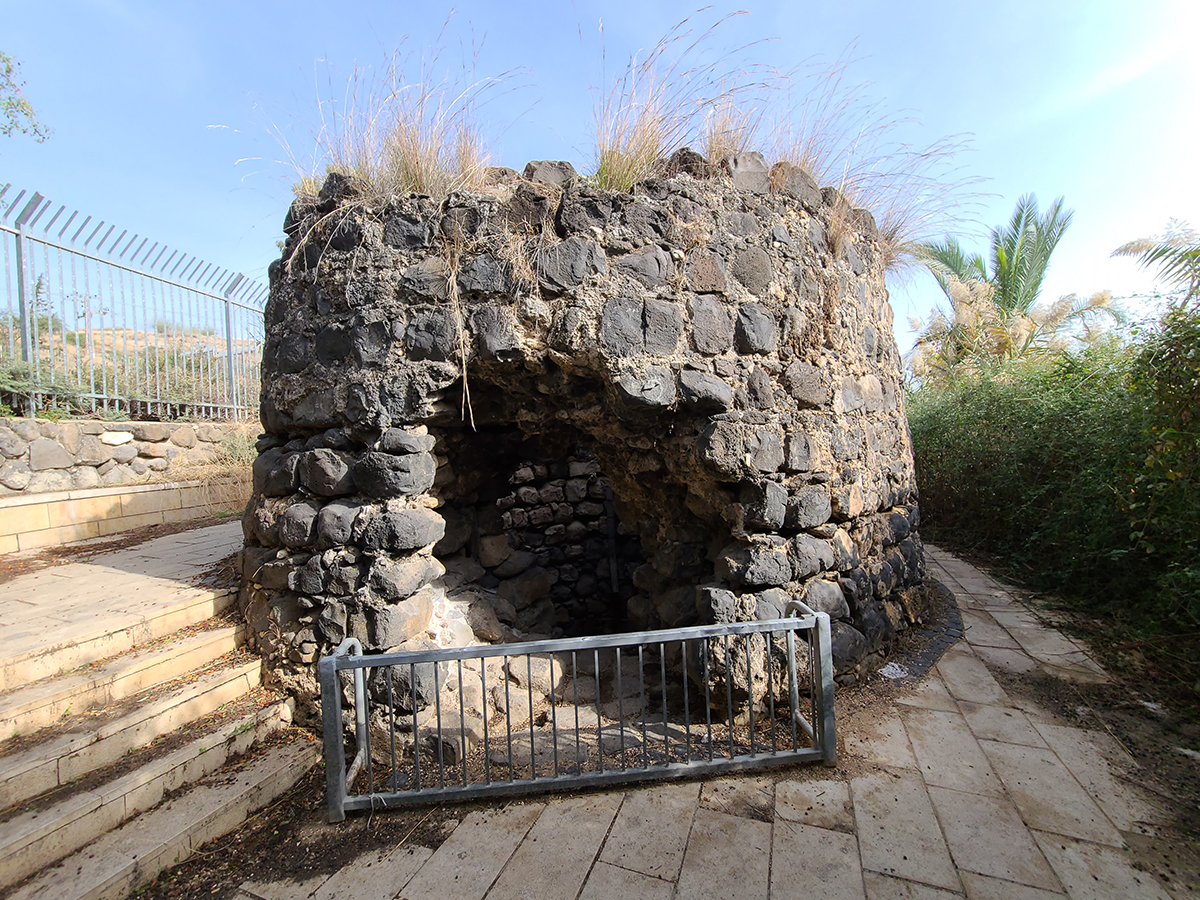 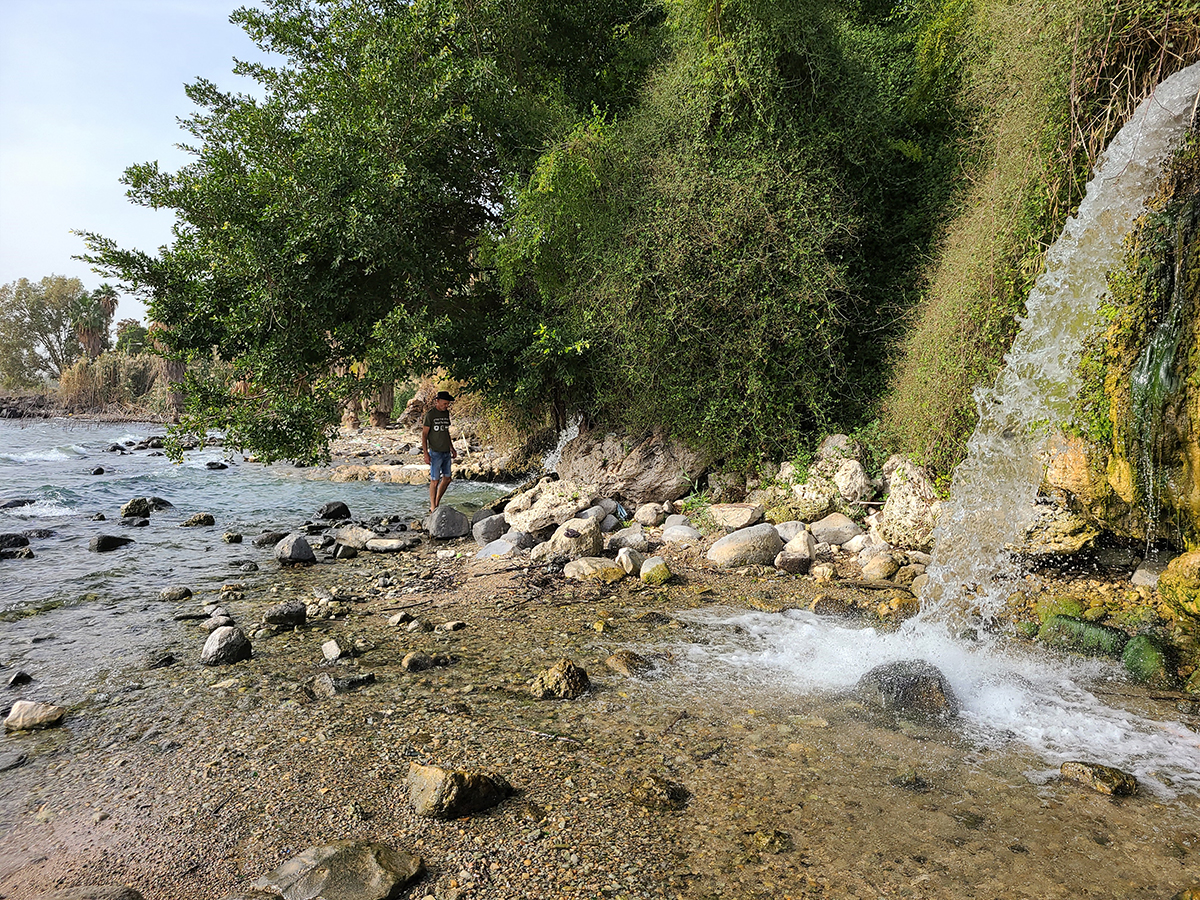 In the forest above the waterfall lies a hidden gem – the outdoor “prayer hall” of the German Church hostel – Pilgerhaus. There are no walls, only a canopy of trees, the whispers of the wind, and the soothing lullaby of gentle waves lapping against the banks of the Kinneret. 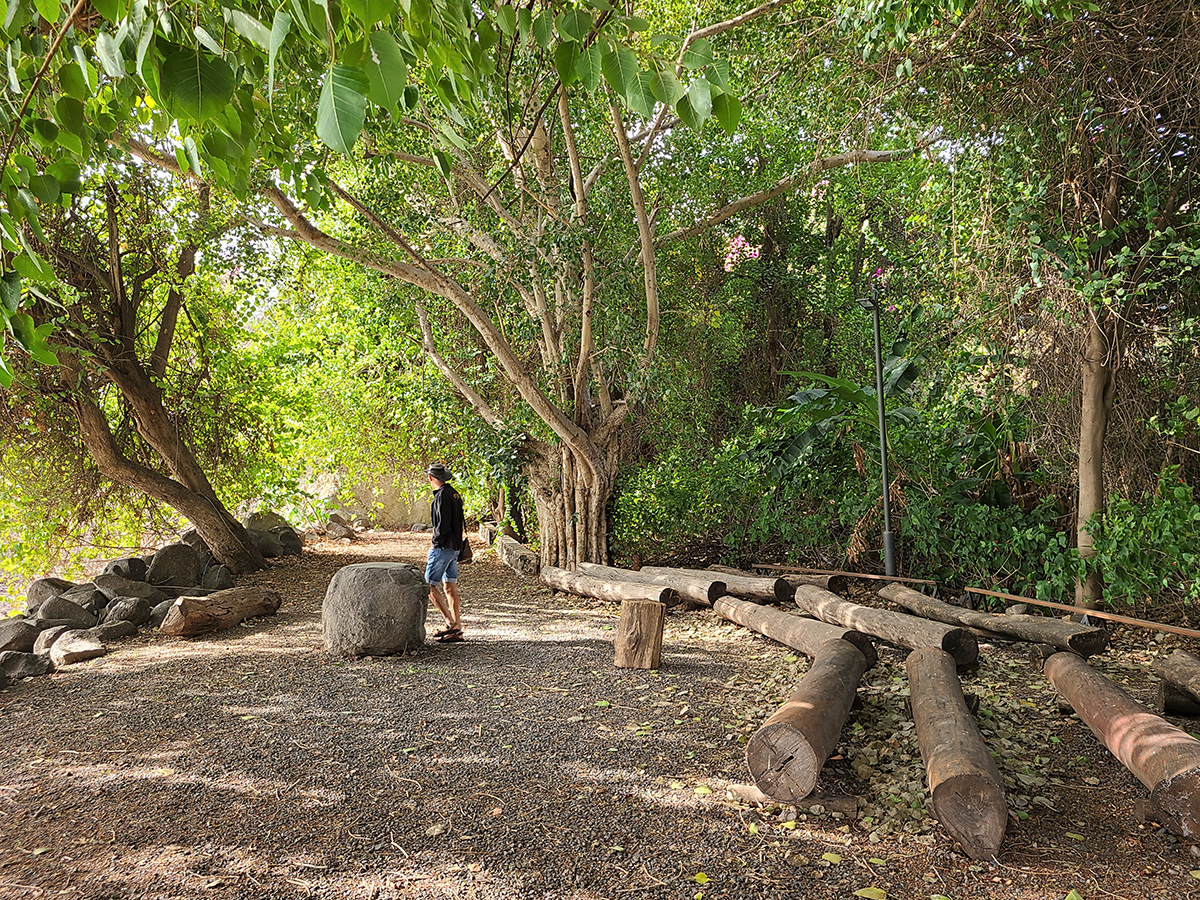 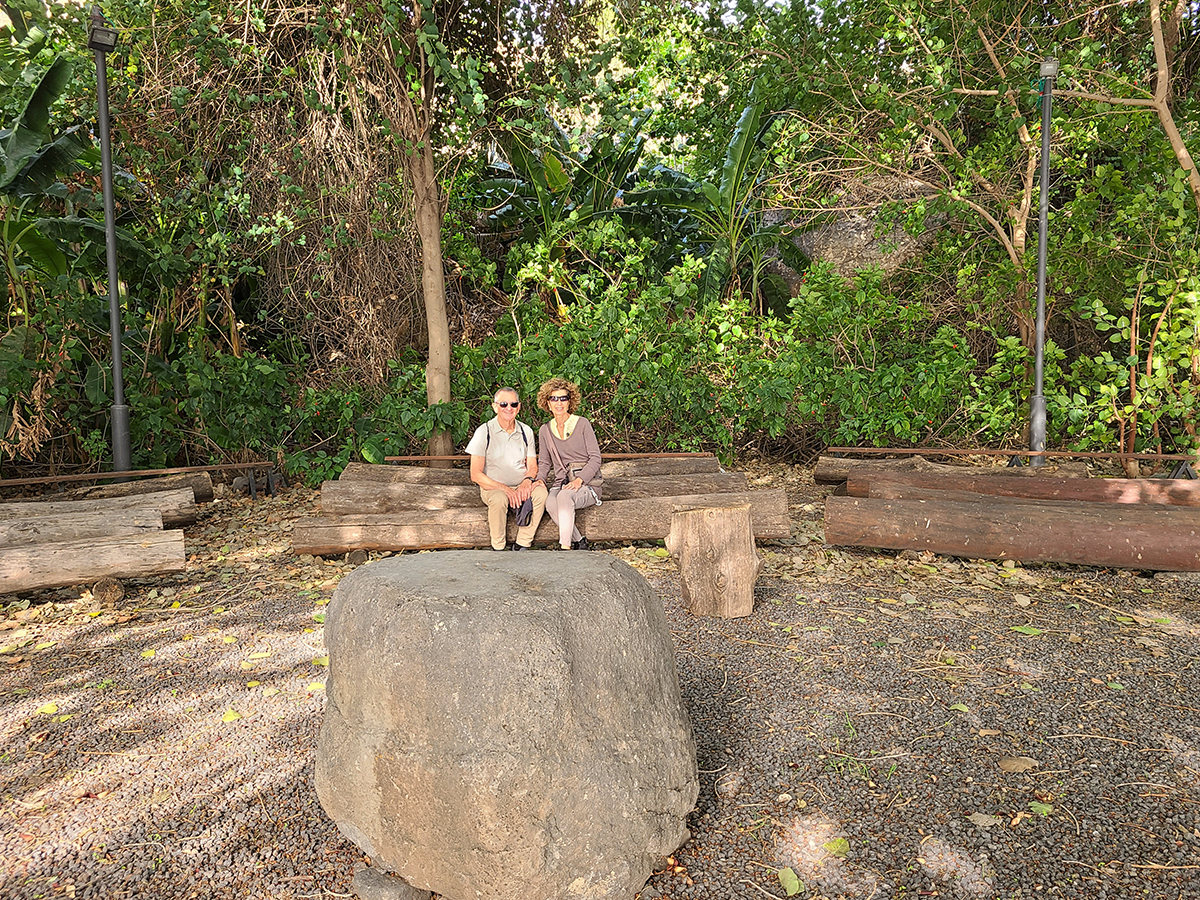 Hamat Gader, near the Jordanian border, is known for its hot springs. Its popularity for health, healing, and relaxation date back to the 2nd– century Roman period. The site, which archaeologists are currently excavating, has revealed extensive Roman baths. 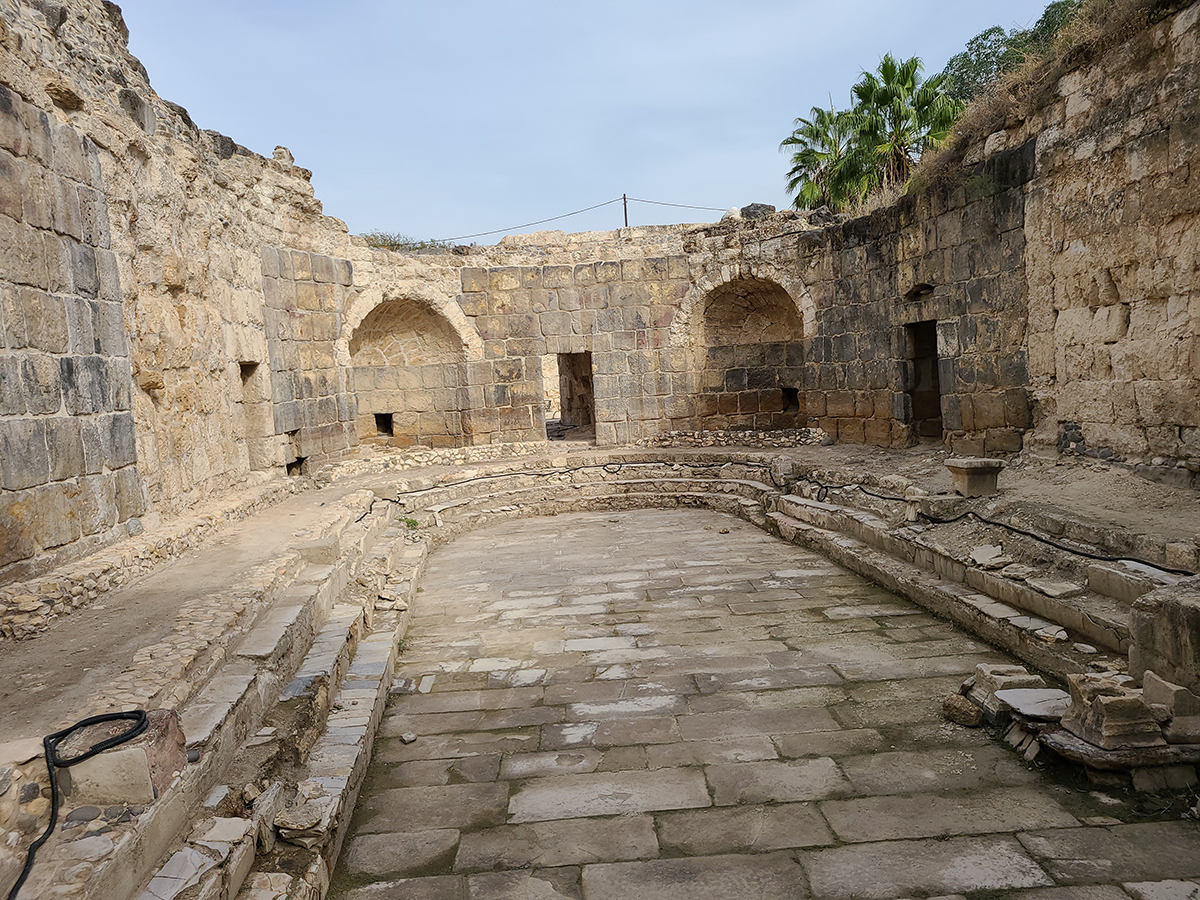 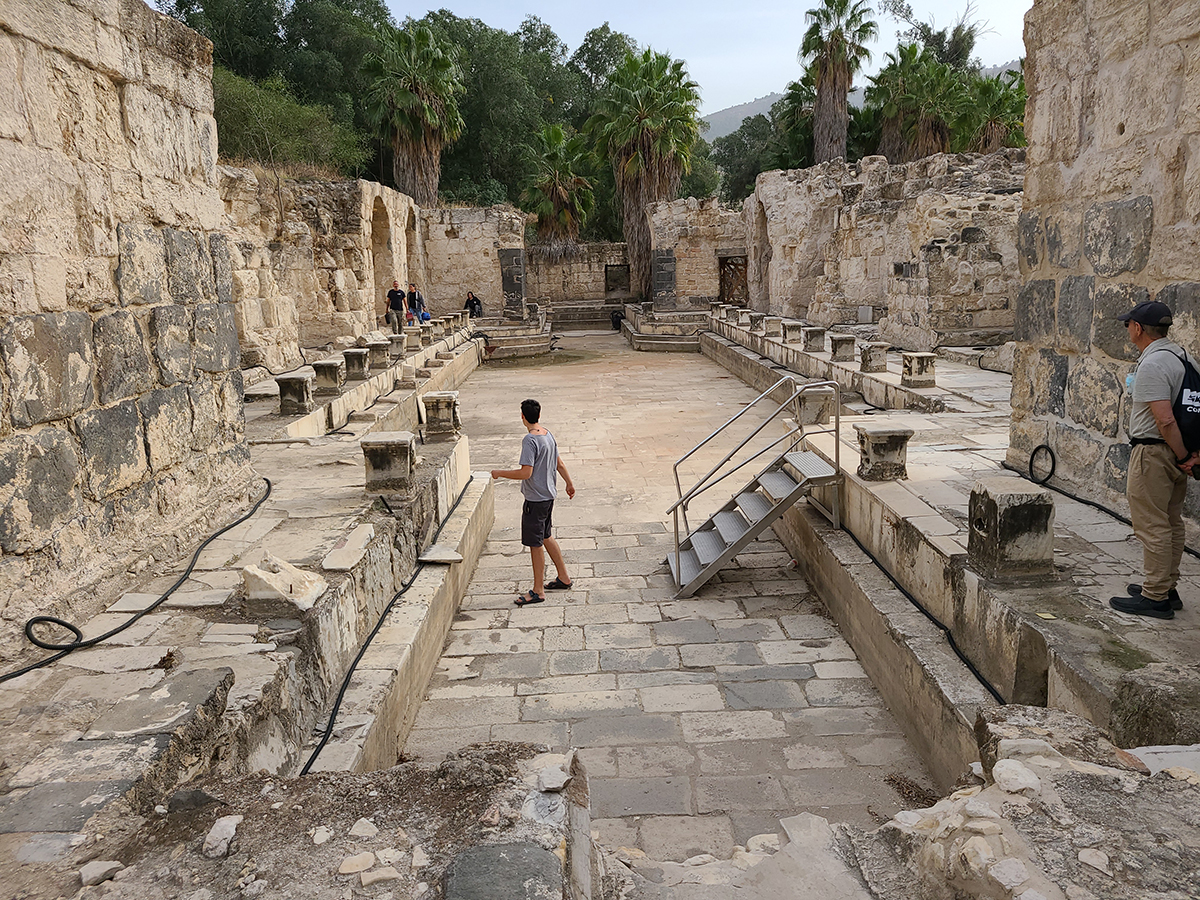 The area was hit by an earthquake in 633 – restored – then hit again one-hundred-plus years later, and eventually abandoned in the 9th century. Thanks to the layers of sand and clay, which formed a thick covering of silt, these ancient ruins have been remarkably preserved. 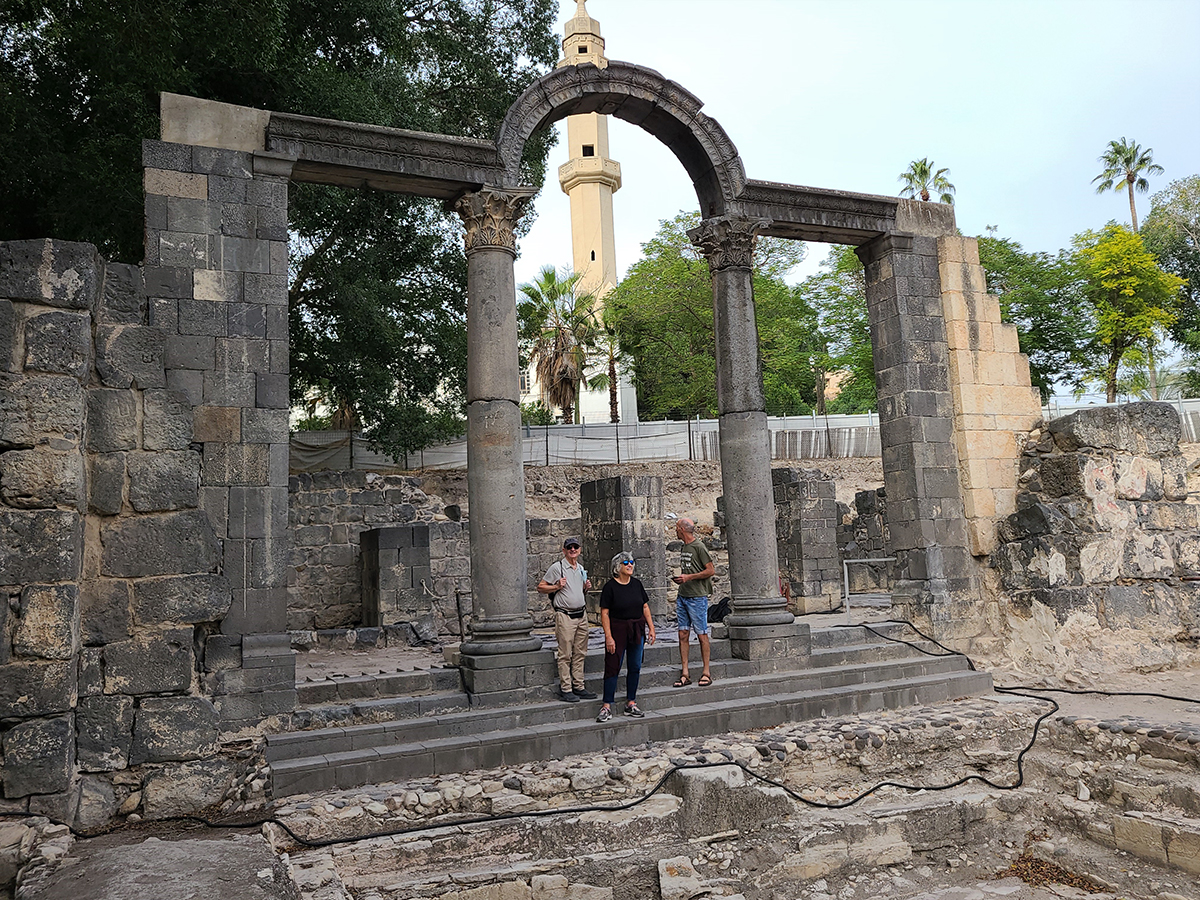 Take a bathing suit and end your visit with a swim in the small hot springs pool adjacent to the ruins at Ein Jun.

Yardenit, on the banks of the River Jordan, is eleven and a half kilometers and a fifteen-minute drive from the city of Tiberias. It was in the river Jordan that Jesus is said to have been baptized by John the Baptist. Every year thousands of visitors from across the world flock to Yardenit to be baptized. Entrance is free, and baptism robes can be rented or purchased on-site. For information about baptisms, go to their website or email info@yardenit.com. 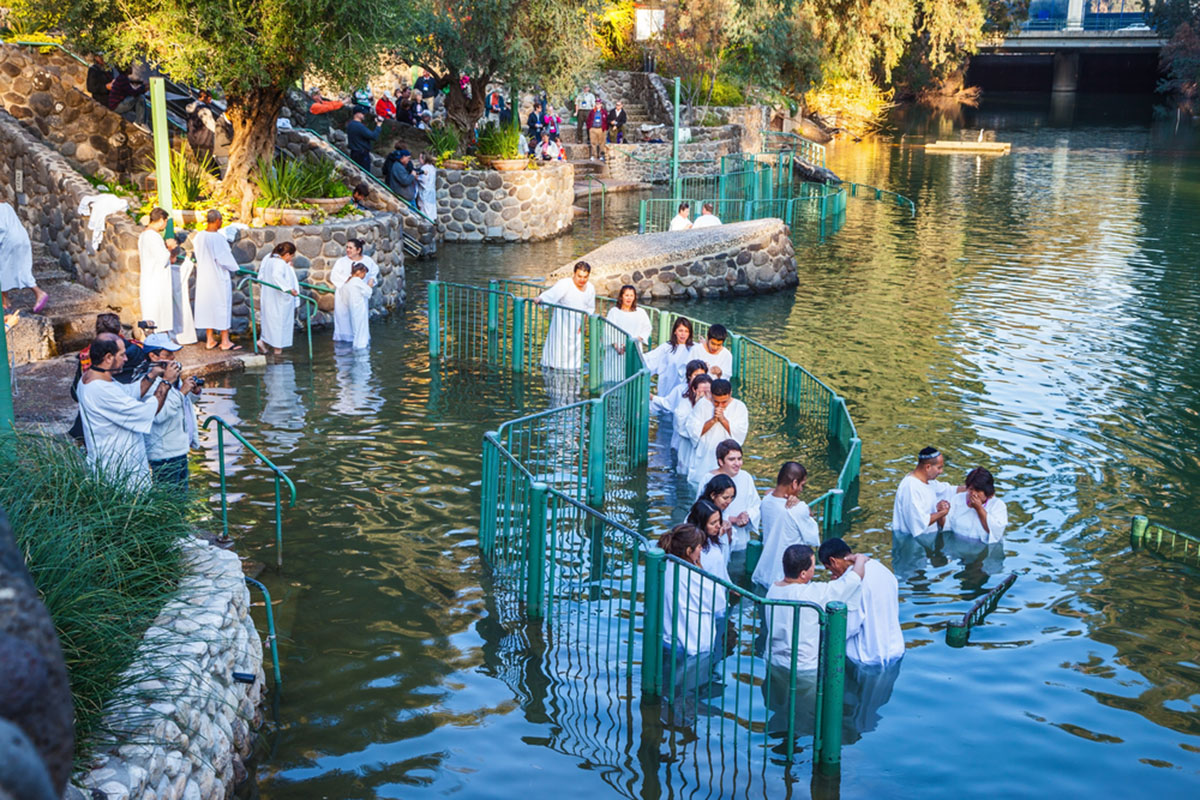 Ceremonial Baptism In the Jordan River.

There are secluded areas along the river for prayers and for those who come to soak up the tranquility of Yardenit where playful otters and schools of fish have made the waters of the river Jordan their home.

Kursi, thirty minutes from Tiberias, was mentioned in the New Testament as the place where Jesus performed the miracle of exorcising devils from the body of a man. The Jewish Talmud mentions it as a center of idol worship. It was also the location of a monastery and church built in the 5th – 6th century CE. Over the centuries, it was pillaged, reconstructed, burnt by a fire, and eventually abandoned.

From the 9th century until 1970 – when new road construction accidentally hit the ruins deep underground – the exact site of Kursi remained unknown. 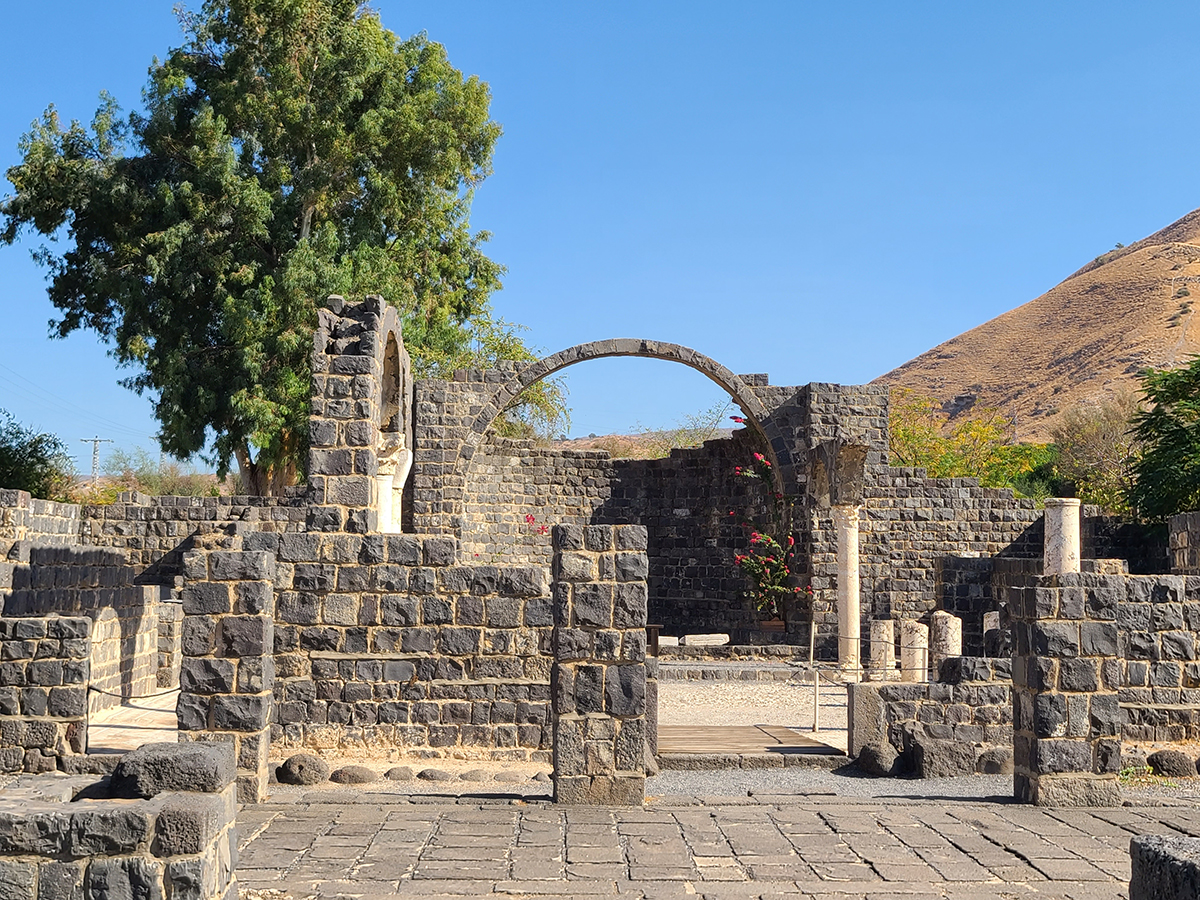 When archaeologists began excavating, they discovered the largest Byzantine monastery ever found in Israel. It had a church, was enclosed by stone walls, and had a chapel paved with mosaics. 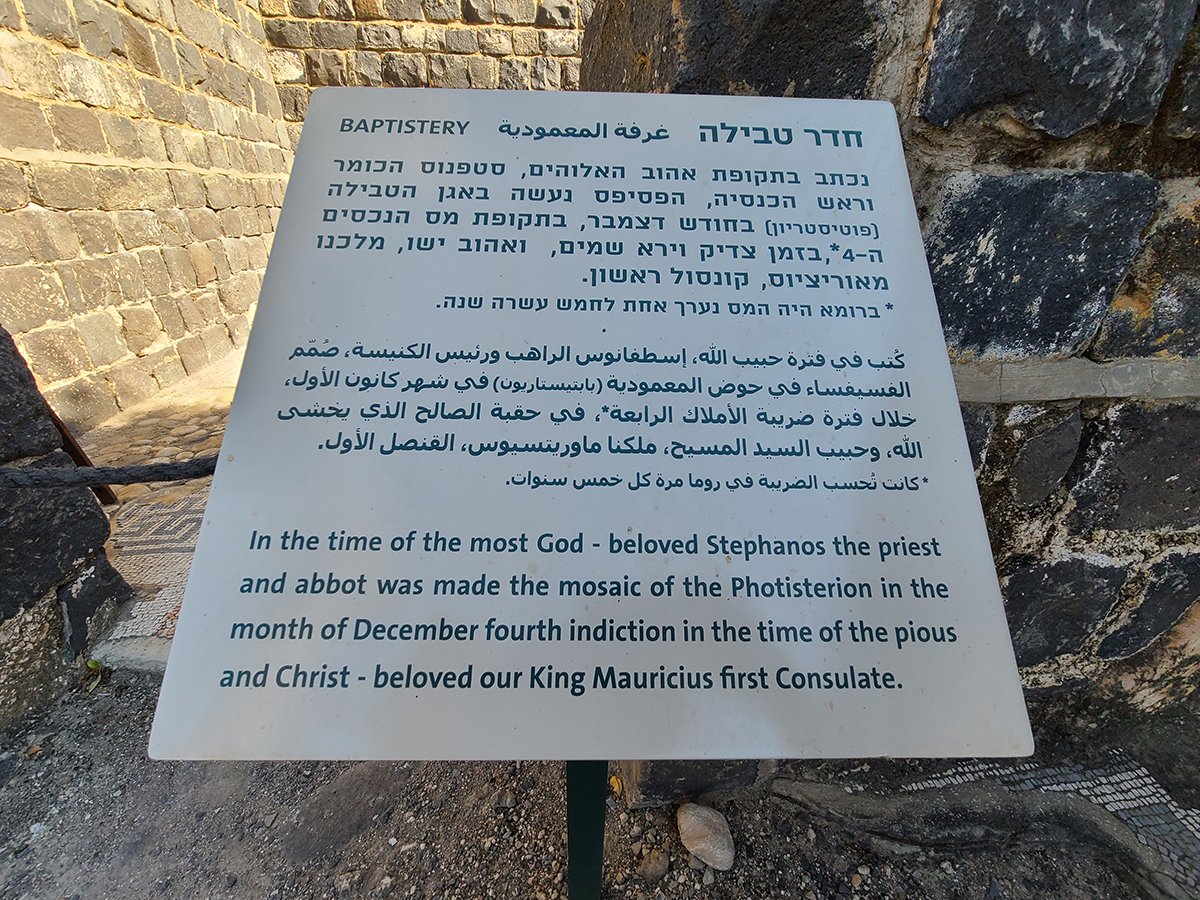 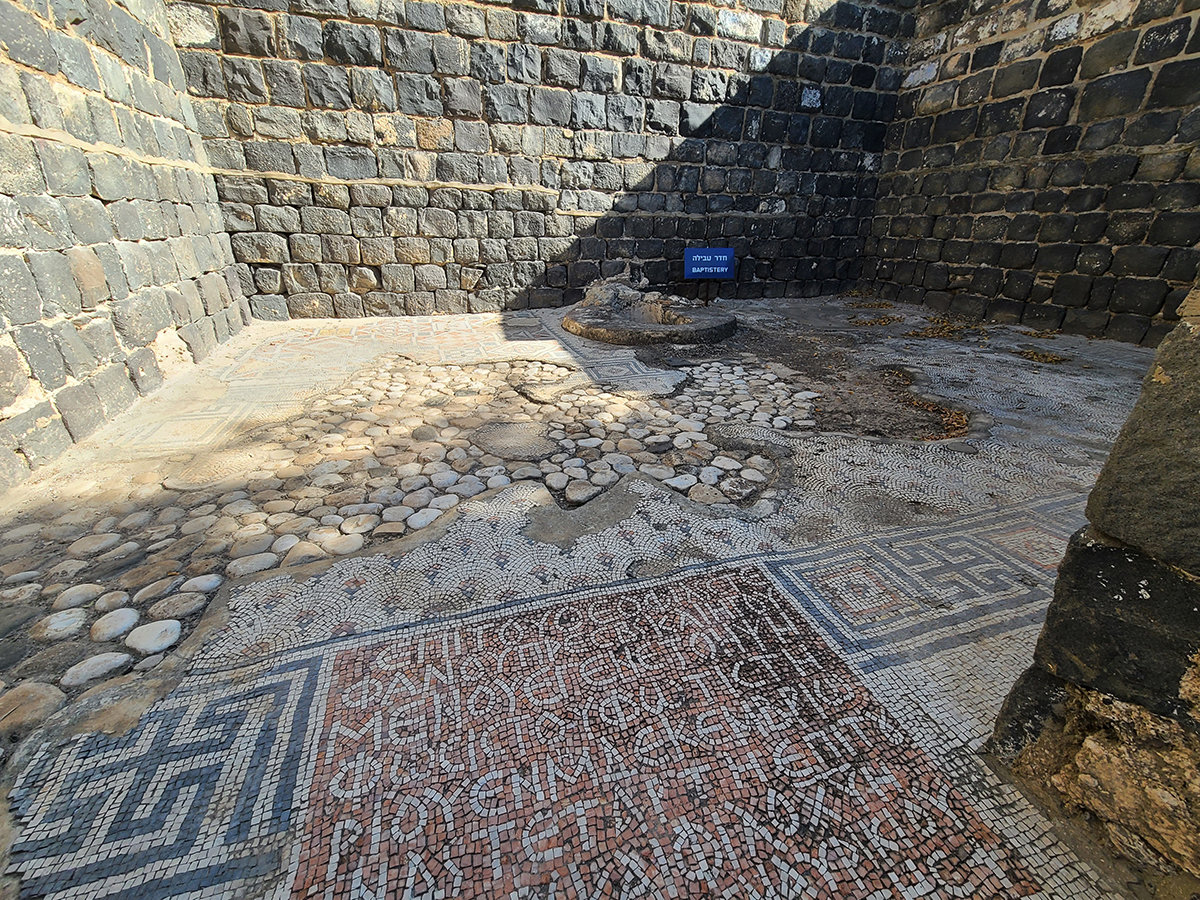 Since Kursi opened to the public in 1982, it has once again become a destination for Christian pilgrims.

In the gardens, there is a spot where two benches rest in the shade of a leafy tree. It is said that in this location, “energy levels – Bovis units are the highest ever recorded.”  (Bovis is the scale for measuring life force: the energy of places, substances, and organisms.)  Therefore, some believe that Kursi generates an extreme degree of energy and life force.

Disclosure: The photos of the Tiberias Marina and Yardenit were purchased from Depositphotos.