A bustling sophisticated town that boasts the presence of all the high end designer stores, five star hotels, food stores on a par with the iconic Fortnum and Mason and bakeries that turn out fabulous French patisserie.
Among all this modernity nestle ancient neighborhoods, charming traditional architecture, and seductive feng shui gardens.

As luck would have it, we were visiting at the height of the fall season when the artfully trimmed and sculpted trees and foliage reflected in the ponds and streams that meander through the Kenrokuen Gardens, were ablaze in fall colors. The Kenrokuen Gardens were established in the 17th Century and completed more than 150 years later. Today they are still beloved by locals and foreigners alike for their timeless charm, design, and seclusion in the heart of a bustling town. 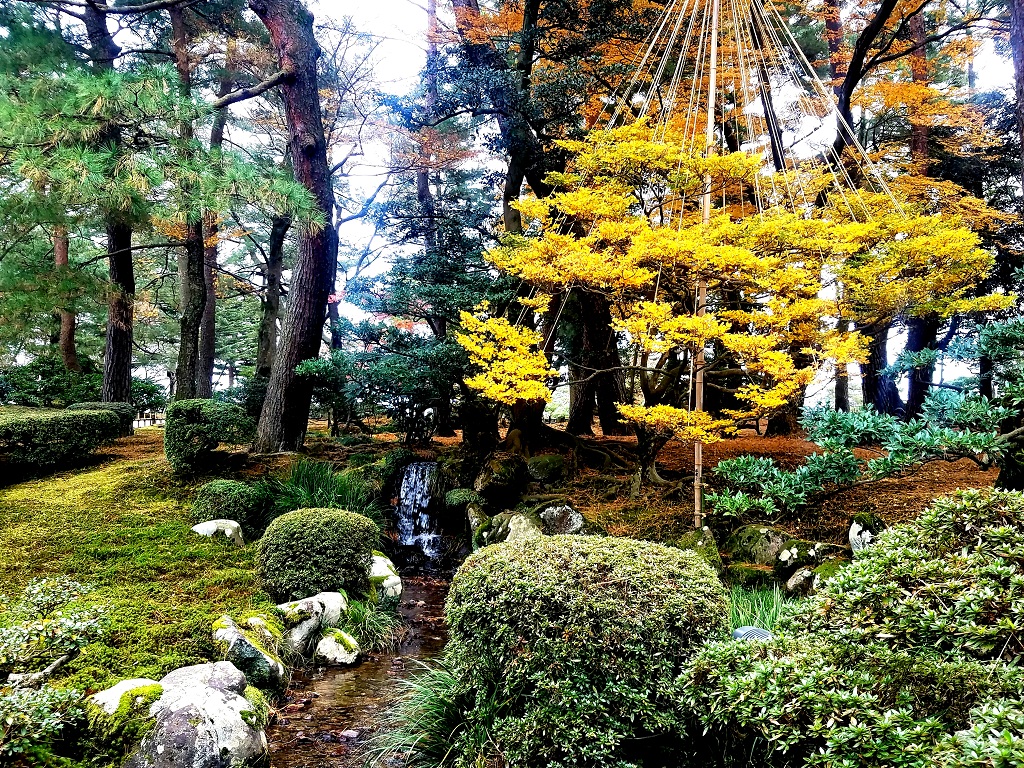 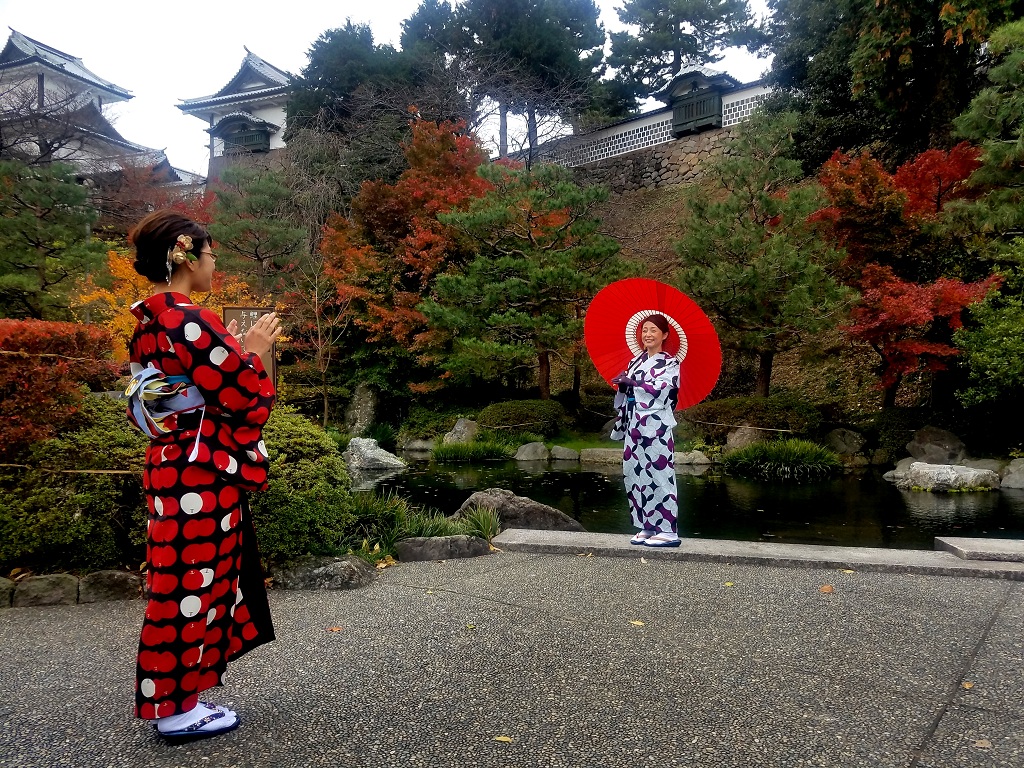 A short bus ride from the gardens is the Higashi Chaya historic geisha district. When we alighted from the bus we trailed two beautiful young kimono clad women who had ridden the bus with us. They led us across a little bridge and down a narrow lane into the heart of the geisha district with its traditional wooden houses, some of which have been converted into boutiques and restaurants, while several still operate as traditional teahouses, and others continue to be lived in.
The young women dressed in their kimonos shuffling along the narrow streets, their wooden clogs clicking on the smooth stones, are an enchanting sight that harks back to another era. 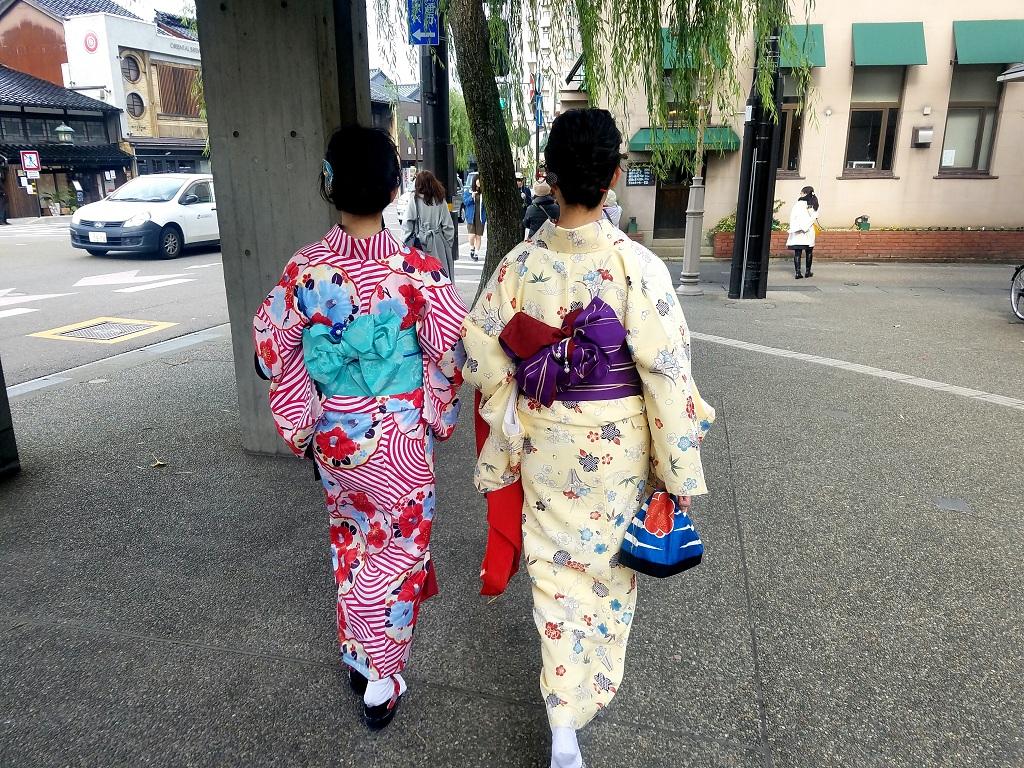 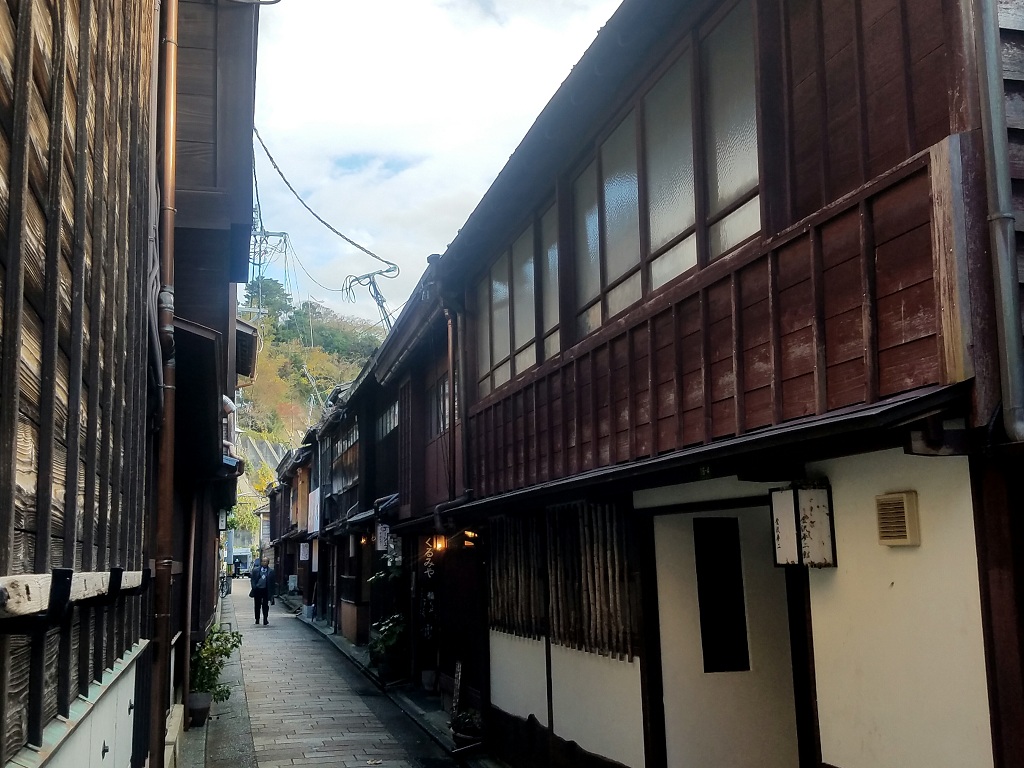 Then there’s the Nagi-machi Samurai district. To find it is quite a feat. Hidden behind the ritzy shopping area and elegant hotels (where the concierges were kind enough to give us directions as we inched our way closer) is an ancient neighborhood which once upon a time housed thousands of Samurai warriors. Beautiful wooden homes wrapped inside high golden walls fronted by little canals, give one an idea of how the Samurai once lived. Their gardens have a serenity and restful beauty that draws one in and makes one want to linger and meditate within their hypnotic space. 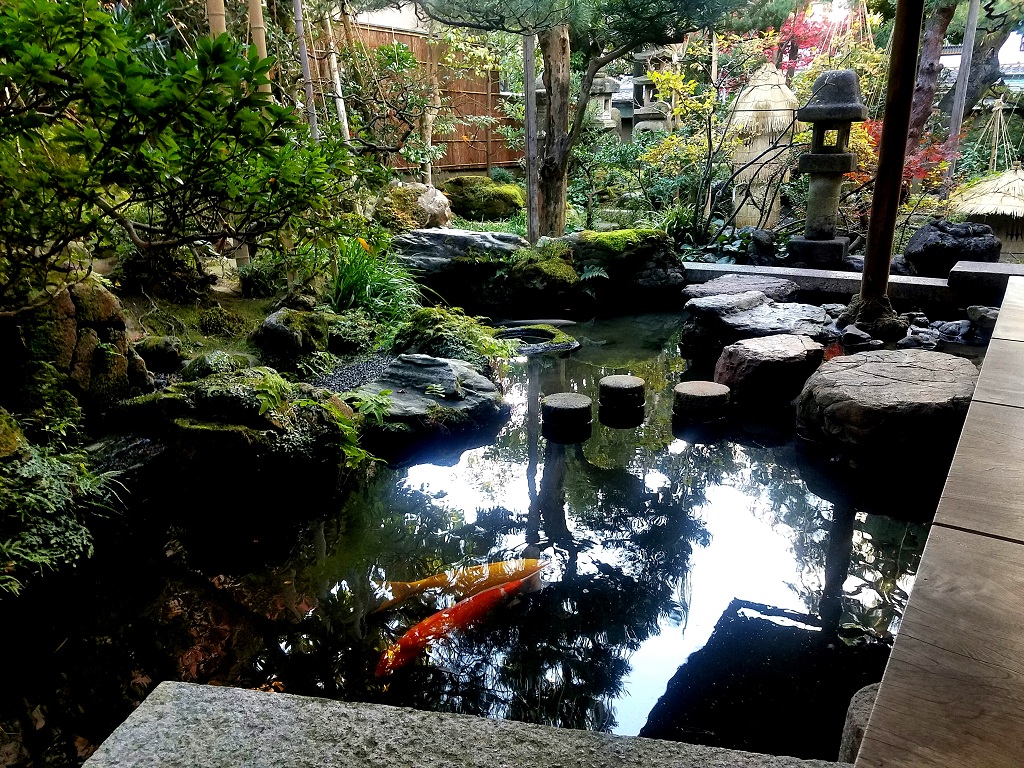 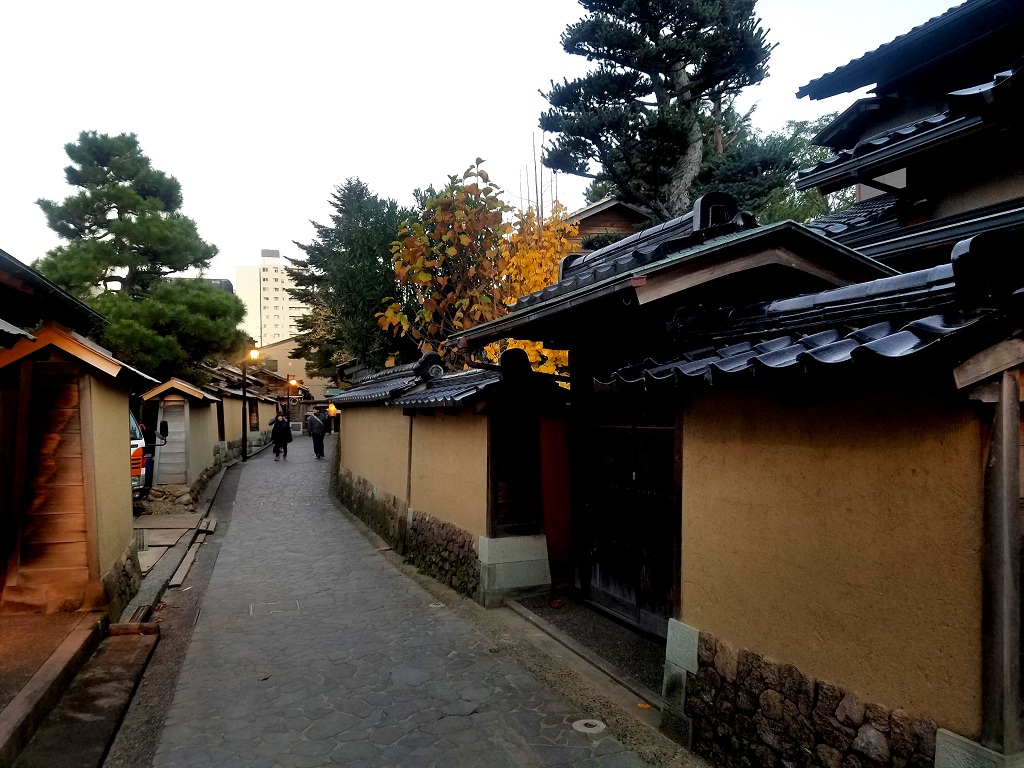 What we learned was that although the Samurai were fierce warriors who would deliver
the head of a master’s enemy to him without a second thought, they were also poets, accomplished artists and potters, who built beautiful shrines within their homes and created lyrical gardens. 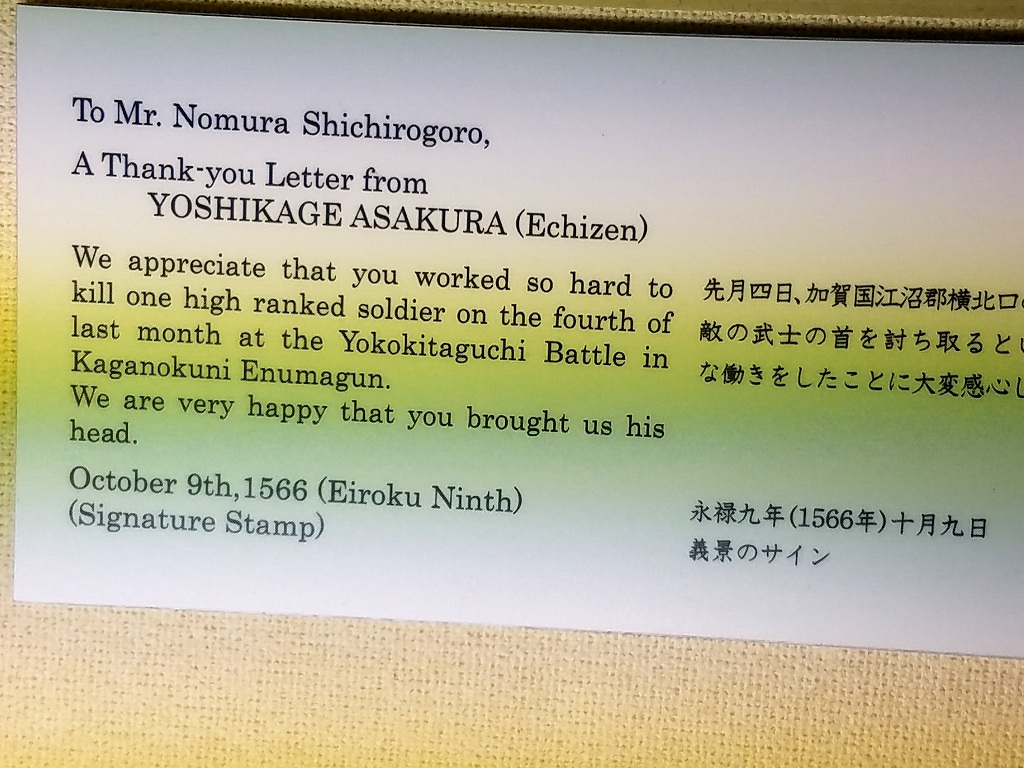 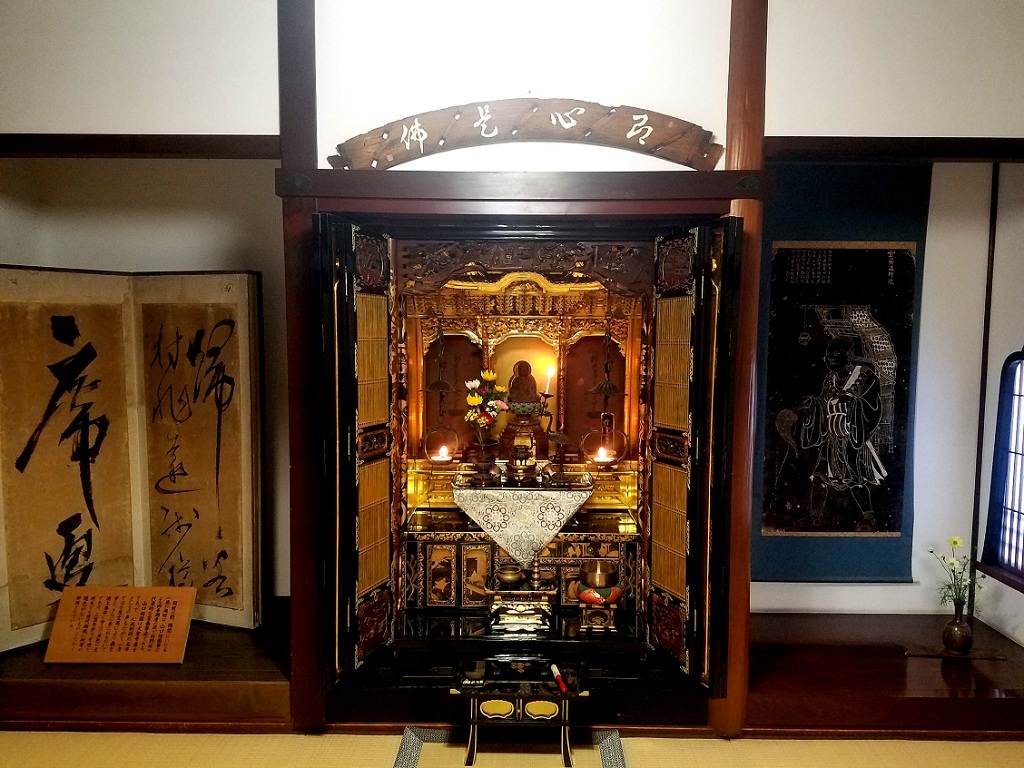 Kanazawa, a city of amazing variety where the new has woven itself around the centuries old neighborhoods.