A tiny plane delivered us to Uyuni, a small dusty adobe town at 14,500 feet above sea level. We were greeted by a beautiful young Bolivian guide and our driver with whom we were to spend the next three days driving for hours across rocky, dusty, desolate terrain, to uncover the many natural phenomena and nature’s treasures that lie buried in this otherworldly remote area of Bolivia.

Beyond the little town of Uyuni there are no real towns to speak of, only small communities where miners and farmers live in adobe and tin roof houses. Occasionally these dusty ‘villages” have a little plaza and church at their center, but for the most part they are ghost towns by day, reminiscent of the set of an old John Wayne cowboy movie. 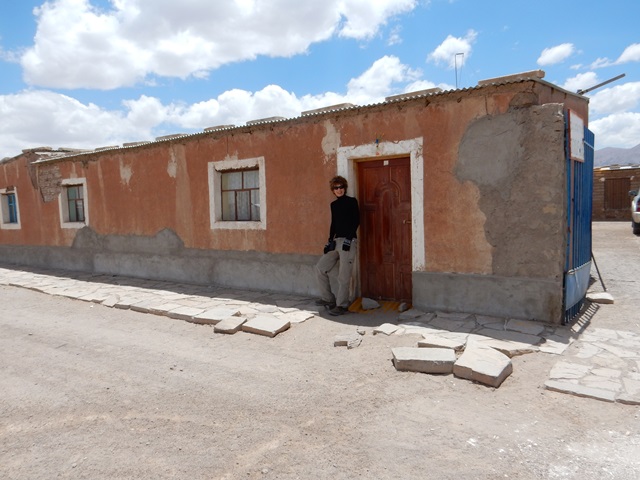 Our destination on day one was The Valley of the Rocks, an area that spreads across hundreds of miles, where the sculpted red rocks that loomed above us are captivating works of art, created over millennia by water, wind, sun, and volcanic eruptions. 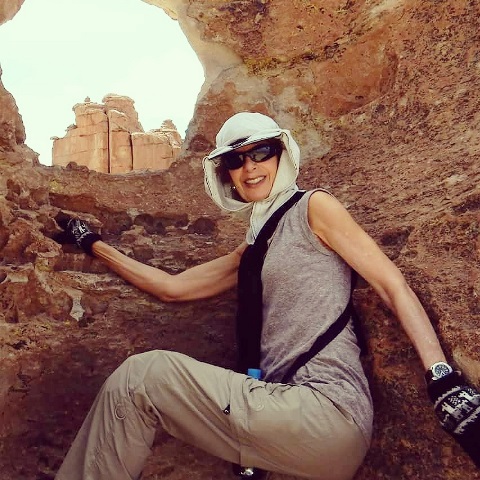 Further along our route, we were rewarded for our strenuous trek- which required climbing over rocks and squeezing between boulders- by the sight of rock art discovered several years ago high up on the rock face, thought to have been painted by the Inca or perhaps even pre Inca indigenous people. One can clearly make out their heads crowned with feathers or headdresses, their llama, and markings which may represent the mountains, the sun etc.

When we drew up to our hotel in the late afternoon, our hearts sank at the sight of it sitting all alone on this vast, parched, red sand, rocky, barren landscape. It looked like a huge yellow shack.

The interior revealed a charming, light filled, spotless and tastefully decorated hotel with 20 small rooms. Ours had great lighting, comfortable beds, a private bathroom and a strong hot shower.

Day two we were on the road again by 6:30 a.m. We climbed higher and higher until we were surrounded by volcanoes: huge, majestic, mystical, and all dormant. We passed sand swept plateaus which they refer to as the ‘Dali Paintings’, because they are scenes straight out of Salvador Dali’s surreal landscape paintings.

The weather turned freezing cold (the prior day had been as hot as a furnace) and snow began to fall, covering everything in a dusting of white -like powdered confectioner’s sugar.

We passed a white lagoon with a high content of borax, which is mined and used as a cleaning agent, in the manufacturing of paint, and of glass.

The Laguna Verde, a turquoise green lake at the very tip of the Reserva De Fauna Andina, rests in the shadows of Volcan Licancabur – which straddles the border between Bolivia and Chile. The bright turquoise green is created by the extremely high content of arsenic and copper.

Lesson to be learned: don’t dip your hands into beautiful colored waters until you know their secrets.

The most breathtaking sight however is the Red Lagoon (Laguna Colorada). The lagoon owes its red color to the natural pigments of the algae which thrive in its mineral laden waters. Hundreds of graceful pink flamingos stand on their long spindly legs in the red water, feeding on the algae. They congregate, feed, take off in flight, and settle again. Not a sound to be heard other than the flapping of their wings. 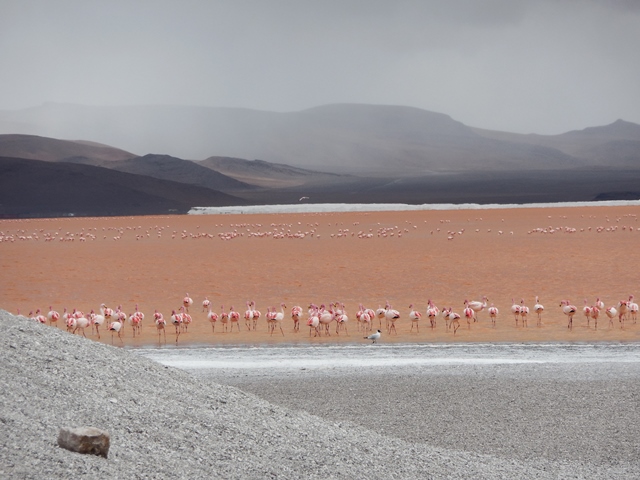 An hour or so farther, we bundled up into every available warm item of clothing at our disposal, and looking like ‘moon men’, followed our guide for a walk through a moonscape.

On one side we had the hot steam of geysers blowing in our faces, and on the other side the snow and wind. We walked along ground that looked like a gurgling, sputtering, breathing, hissing foreign planet. Geysers bubbled, boiled and spat. Some were industrial grey in color, while others were icy blue or a creamy coffee color. Oblivious to the cold, I felt as though I could walk forever in a dream-like trance through this strange and fascinating terrain. 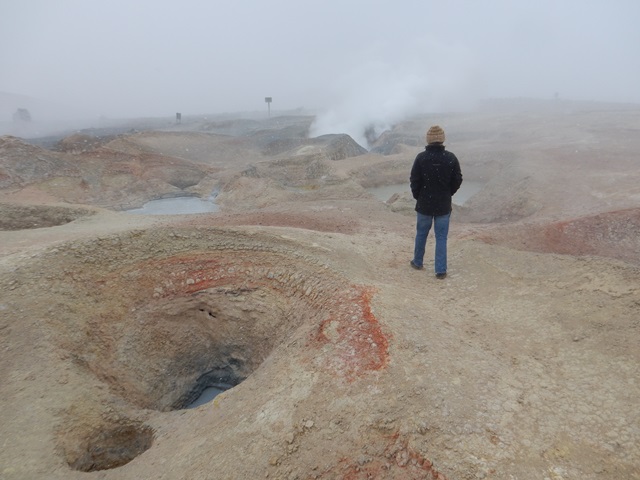 At sunset, after 12 hours in the jeep, we drew up to a what appeared to be a mirage.. A palace of salt called Palacio de Sal. This unique hotel overlooking the white salt flats is made entirely of salt. The walls, the ceilings, the columns, the tables and chairs – ‘todo’ ! It shimmers and glows in the setting sun like a jewel. The interior boasts paintings, rugs, hand blown colored glass sculpture, throw pillows in vibrant colors, and enticing seating areas that lured us to settle down with a cup of coffee, a pastry and a good book. 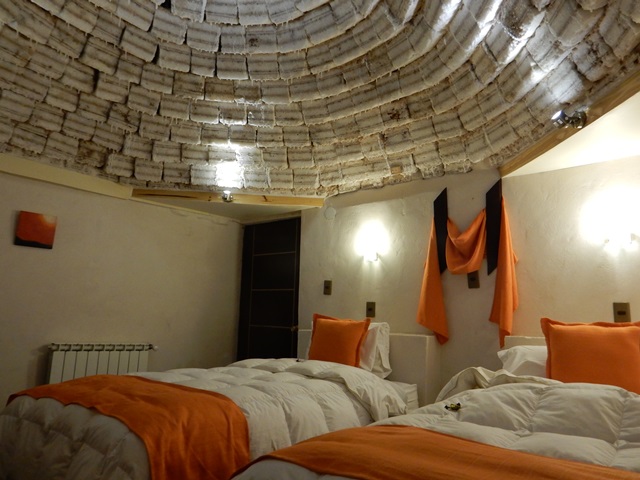 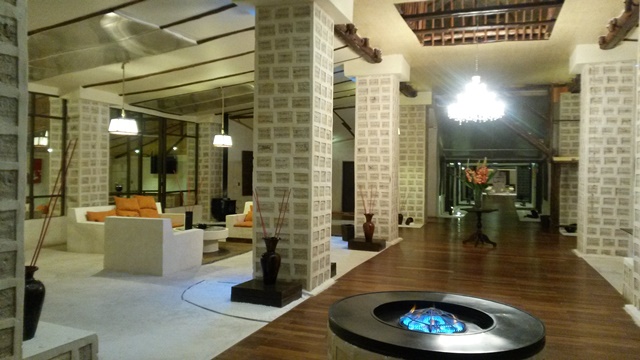 The following day the weather pulled out all the stops for us as we drove across the Salar. A flat blinding white expanse of salt that extends over hundreds of kilometers, this dazzling surface shimmers beneath the cloudless blue sky with such intensity, that it would appear to be snow.

It’s quite remarkable how the drivers find their way with no roads, no signs, no markings, just white as far as the eye can see. Tourists who have attempted to cross the Salar driving themselves have been known to be lost for days before being found driving around completely disoriented.

We visited Colchani where salt is processed and packaged to be sold; Volcan Tunupa and the picturesque ancient village of Tahua which has a small rustic stone church with an Andean altar outside its walls. Here candles are lit and offerings of llama are made to keep the gods happy – an interesting blend of Andean and Christian beliefs, which one comes across all over South America; caves where the skeletons of human sacrifices sit surrounded by the items that accompanied them to the afterlife; the island of Inca huasi where giant cactus stand like sentinels watching over the Salar and where rocks- that are clearly dried out coral -stand testament to the fact that this area was once submerged beneath the ocean. 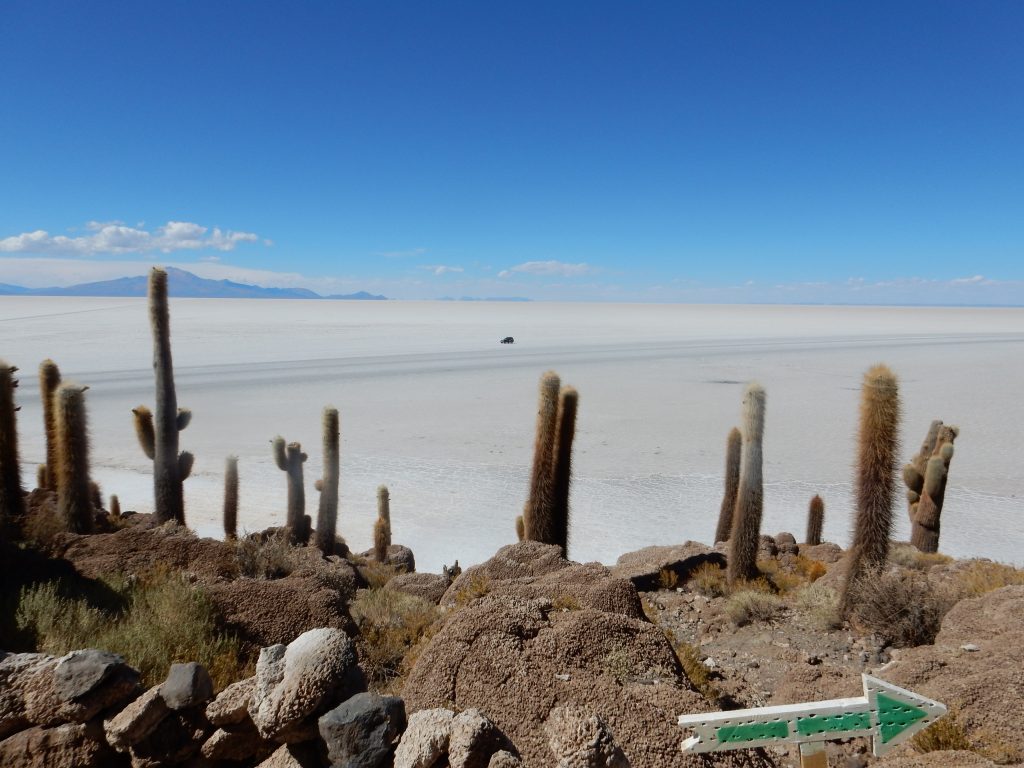 ‘Uyuni’ – difficult to reach, sometimes grueling to explore, but an unforgettable unique destination.