The Island of Taquile – Peru

Isla Taquile, 27.9 miles from Puno, rests on Lake Titicaca surrounded by its sapphire waters. It is only a half mile wide and four miles long, with a population of two thousand. (Lake Titicaca at 12,507 ft. is said to be the highest navigable lake in the world.)

When we reached Taquile, we docked beside a small fishing boat where a little girl dressed in traditional Taquileno clothing, sat patiently waiting for her father to set sail. From the boat landing, we set off along the steep, stone stairway that led us on a vertical climb to the sun drenched town plaza. There we met up with our young guide Elvis, who was fluent in English, Spanish, Quechua, and Aymara. Most of the islanders don’t speak Spanish let alone English. They either speak Quechua – the language of the Incas – or Aymara which predates Inca times. 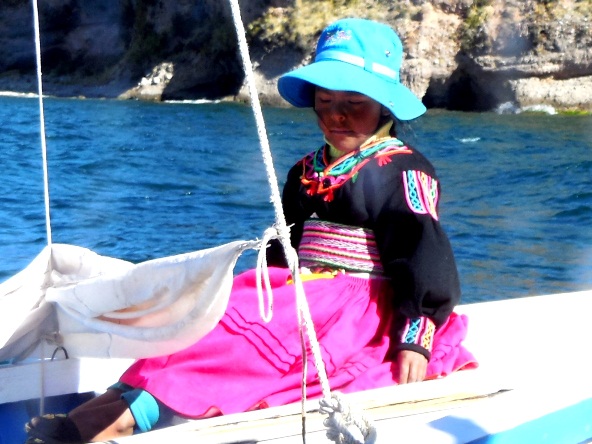 Inhaling the fresh aroma of eucalyptus leaves which carried on the breeze, we followed a narrow, pebbled pathway from the tiny town center across agricultural terraces. We passed men at work constructing a house in the spirit of Ayni: Reciprocity. When a Taquileño needs assistance, members of the community show up to help, and the deed is repaid in kind. 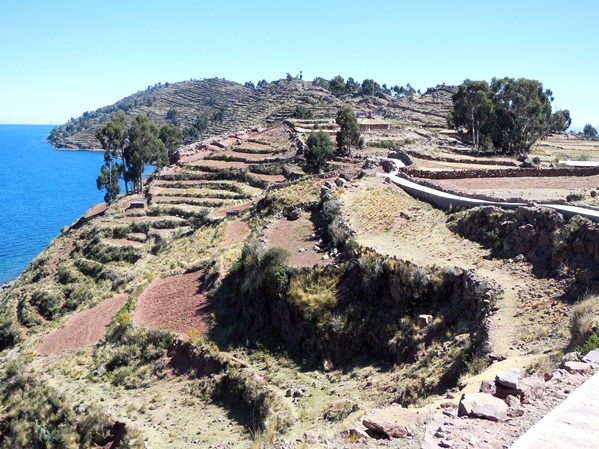 The rustic beauty of the two storied home of Silvana and Maria – our island hosts – was beyond anything we could have imagined. Their taupe-colored adobe house – its walls blanketed in creeping, pink geranium vines – is built around a courtyard where a canopy of plump, purple passion fruit provide shade.

The home looks out at the family’s planted terraces, Lake Titicaca, and the snow-capped Andes Mountains which were wrapped in a wooly, silver scarf of clouds. 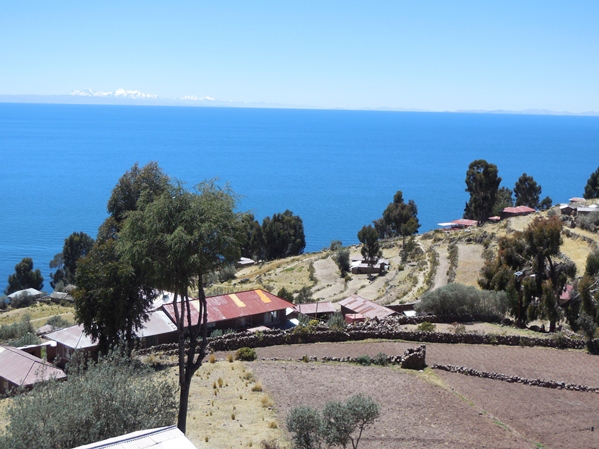 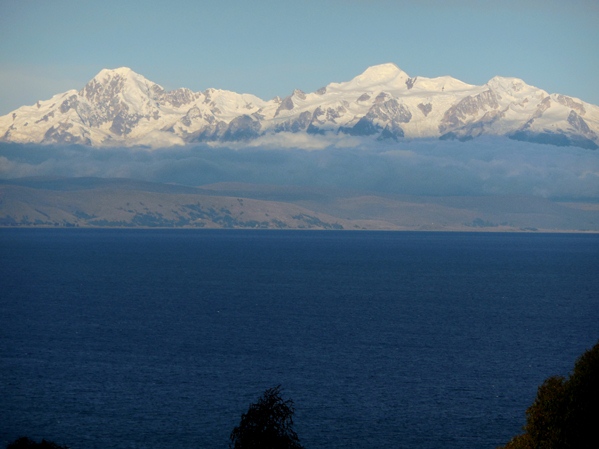 Silvana and Maria – like all the men and women on the island – wear traditional dress. For the men this consists of black slacks; a short black waistcoat; a white shirt with puffy sleeves ruched at the shoulders and cuffs; an embroidered waistband; a red, woven, coca leaf pouch ( a gift from a woman to her husband when they marry ), which hangs from his waistband; and a whimsical floppy , knitted, stocking cap. 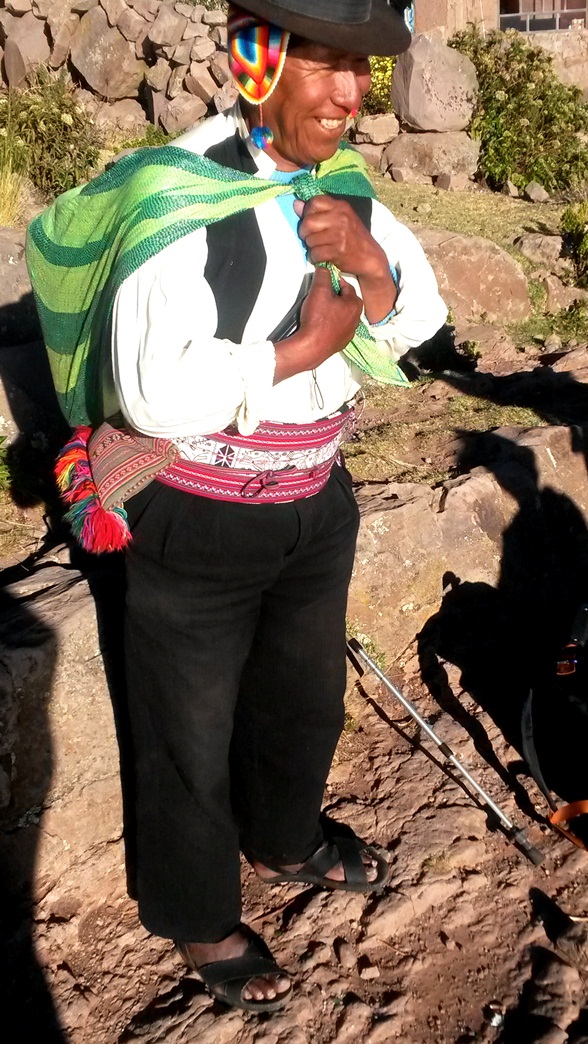 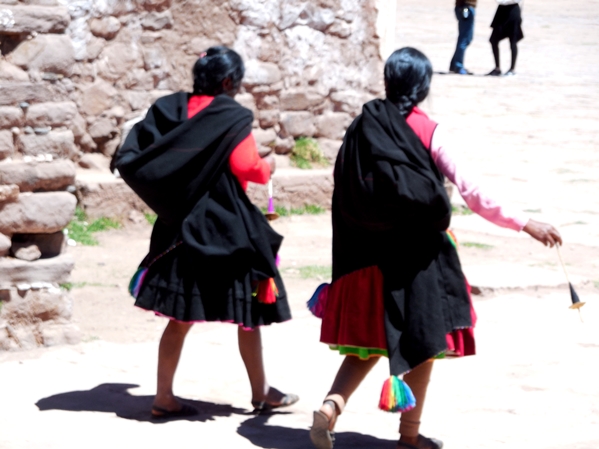 A wobbly, wooden staircase, led to our sparse but immaculate second floor bedroom, which was bathed in natural light and boasted a million dollar view of Lake Titicaca. 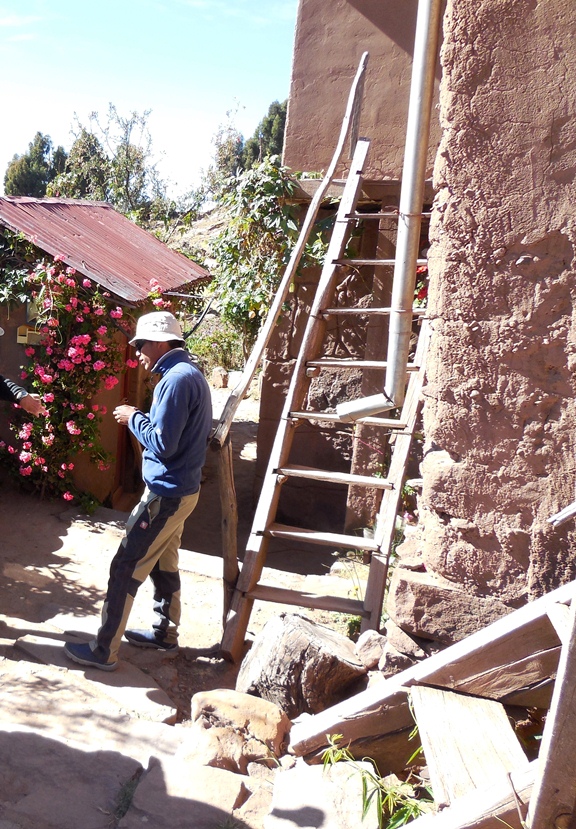 Our meals, which we enjoyed in the family dining room, were prepared by Maria and served with pride by her fifteen year old son, under the supervision of Silvana. Silvana is a dignified, proud man, with a lean muscular physique, chiseled Inca features, a burnished bronze complexion, warm twinkling eyes, and a gorgeous smile. While their teenage son delivered steaming bowls of food to the table, their ten year old conversed politely with us in Spanish. His name is Clever. Taquileños have bestowed some interesting foreign names on their children, like Clever, Elvis, and Stalin.

Our dinners consisted of hearty quinoa-vegetable soup, followed by a mixed vegetable stew and rice. A flask of hot water and Coca and Muna leaves for making tea, always stood at the center of the table. Both leaves are said to aid digestion and are great natural remedies for altitude sickness and upset stomachs.

Before breakfast, when Taquile was saturated in silence and golden sunshine, we hiked across the island to an idyllic, horseshoe, white sand beach. 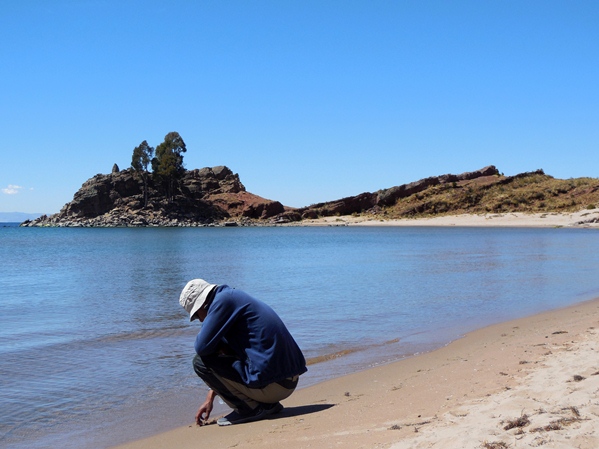 We passed little groups of chattering, playful, tiny tots, ages 3-6, walking to school unaccompanied by adults. They looked like dolls in their brightly colored traditional dress. Teenagers clutched school books under their arms, while music emanated from portable radios that peeked out of their pant pockets. 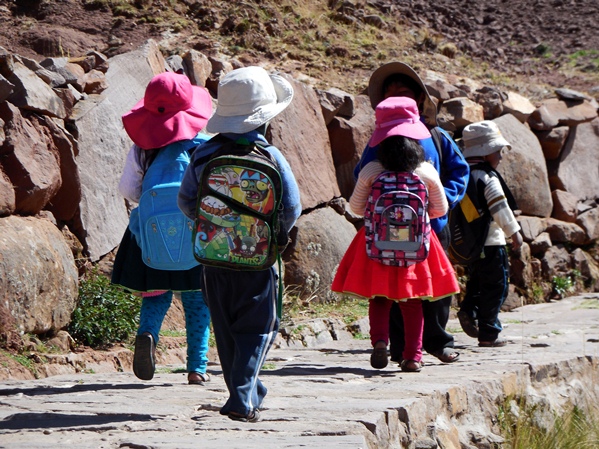 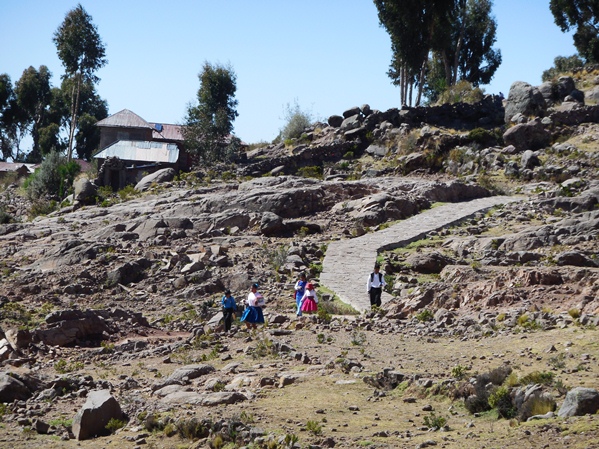 Women spun yarn on wooden spindles as they led their animals out to the terraces to graze, and as the men passed by, we heard the click-clicking of their knitting needles. It is the men who craft the hand knitted items bearing the intricate patterns which have been handed down from generation to generation, while the women do the weaving. 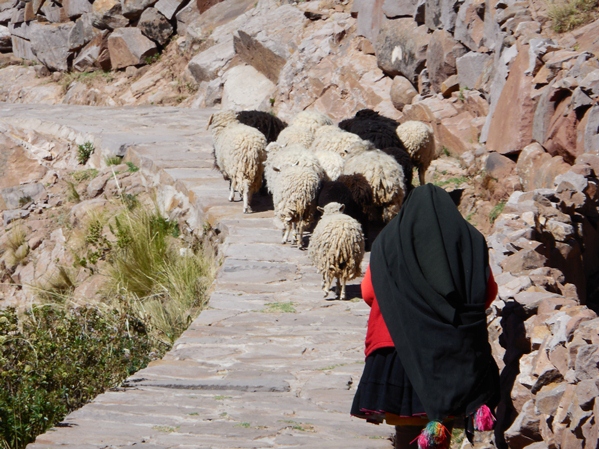 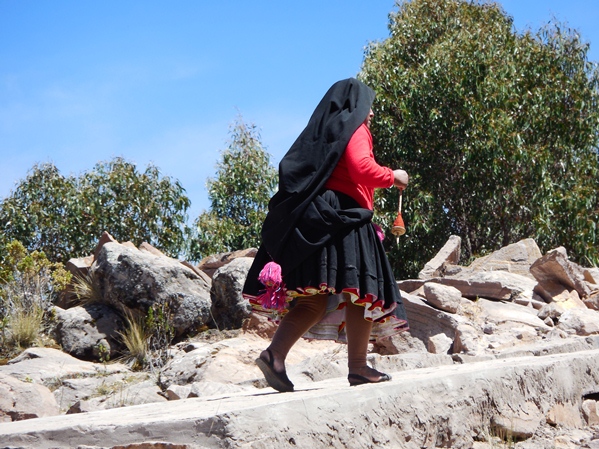 The natives on the islands of Lake Titicaca live by an ancient Inca creed: Ama Sua (do not steal), Ama Quella (do not be idle), Ama LLula (do not lie). There is no police force on the island of Taquile. Conflicts are resolved by a body of elected community leaders. There is no mode of transport, not even donkeys. From the earliest age, people walk miles without giving it a thought. Herbal medicines are used to heal ailments; the diet is largely vegetarian; there is zero pollution. A system of barter is used to purchase sugar, salt, fruit and protein from neighboring islands or the main market in Puno. The majority of tourists to the island are still day trippers and although it is now more common for younger Taquileños to venture off the island to obtain seasonal work – the rhythm of life continues much the same as it has for centuries.
It was with heavy hearts that we departed from this little haven of tranquility, from its sun-kissed terraces, ancient Inca ruins, fragrant eucalyptus trees, and its gentle, hospitable people, who live in harmony with one another and with Pachamama (mother earth) and Cochamama (mother sea). A place virtually untouched and uncontaminated by modernity. 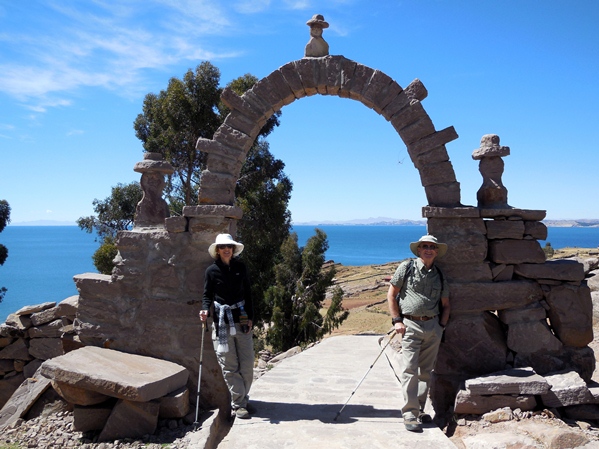