Our visit to the Kremlin was certainly one of the highlights and biggest surprises of our time spent in Moscow. Originally a medieval town within the walls of a wooden fort, it expanded to become a fortified city.Under the rule of Ivan The Great, artists from Renaissance Italy were commissioned to build palaces, cathedrals, and his great Bell Tower.

Like many first time visitors to Moscow, we expected the Kremlin to be like the White House or perhaps the British Houses of Parliament. In actual fact, it’s an extensive complex of palaces, cathedrals, gardens, squares, the Armory, and Ivan the Great’s Bell Tower, all enclosed within the red Kremlin walls which are topped by 20 towers. Beyond the walls lies the immense Red Square. The word ‘red’ has nothing to do with communism nor with the red walls of the Kremlin. The old Russian word for beautiful was red, hence Red Square, meaning beautiful square.

Red Square with wall of The Kremlin on the right.

Each of the Kremlin churches: The Church of Assumption; the Archangel’s Cathedral; and the Church of Annunciation are covered from floor to ceiling in extraordinarily rich murals and icons. Their glistening gold onion-shaped domes – reminiscent of huge, golden, chocolate Hershey’s kisses – catch the sunlight which gives them a whimsical quality.The less imposing but beguiling Church of Our Lady’s Holy Robe boasts eleven gorgeous golden domes set atop red and green stone and bronze bases.

Cathedral within the walls of the Kremlin.
Our Lady’s Holy Robe.

Also on display in the gardens are the Czar’s Cannon and the Czar’s Bell. The latter is made of two hundred tons of bronze. It was customary for every czar to commission a bell weighing many tons to be made for their coronation. It seems that it was also common for each czar to try and outdo the preceding czar by having their bell be heavier, larger, and more opulent. This one measures 20 ft. in height and 22 ft. in diameter, and was commissioned by Empress Anna Ioannovna. 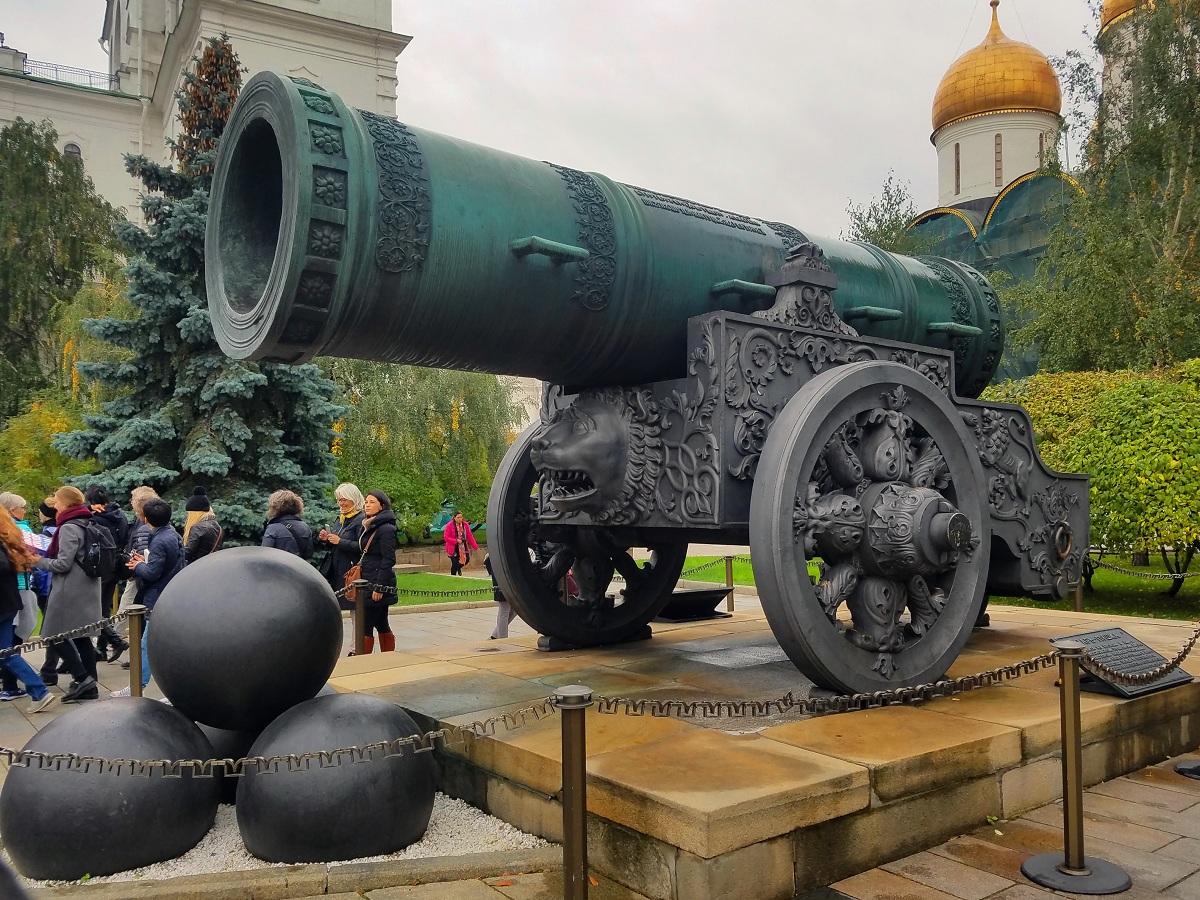 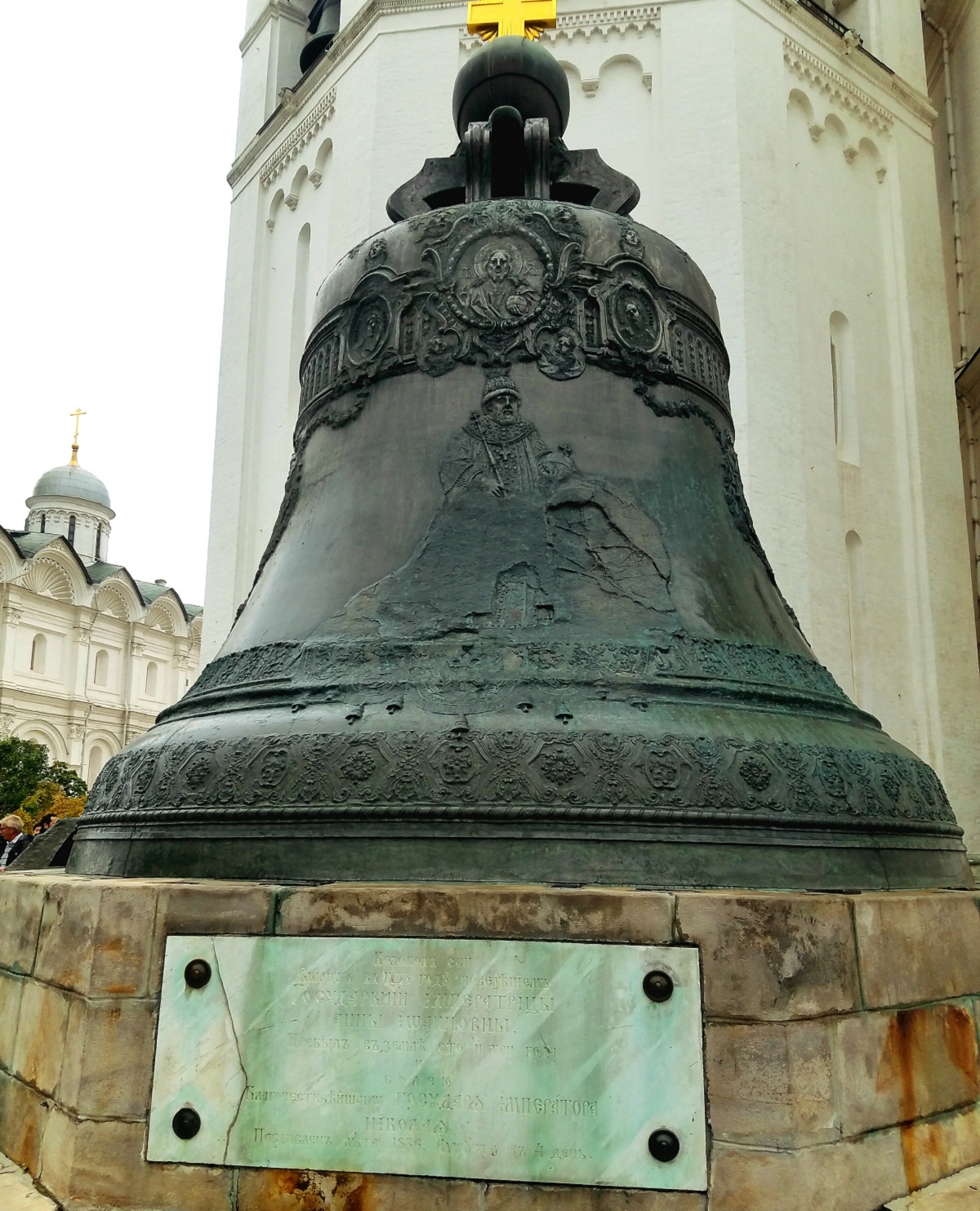 It takes a good half day to visit the Kremlin cathedrals and grounds, especially if one is captivated by the extensive amount of artwork and icons covering every inch of the interior walls and ceilings. 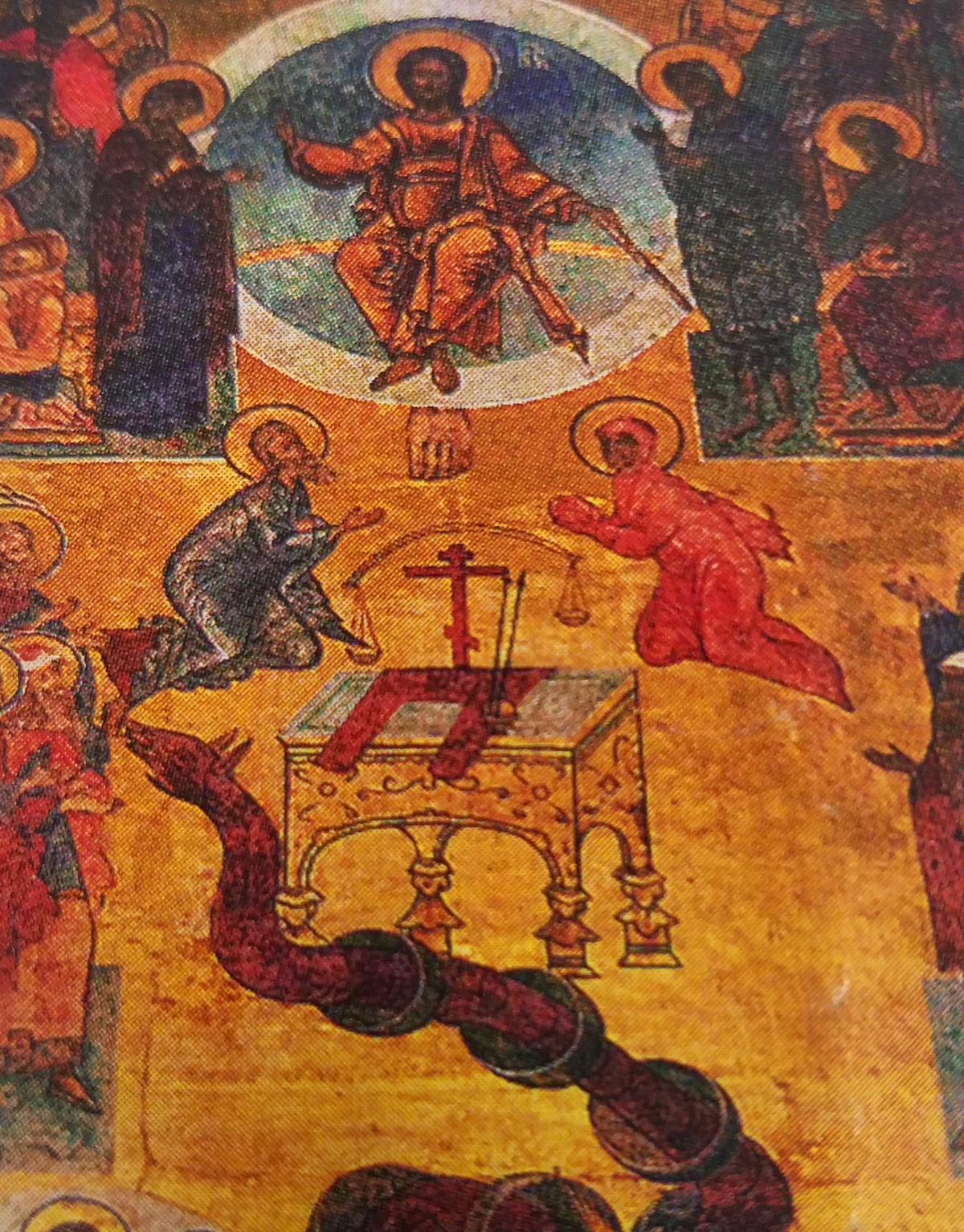 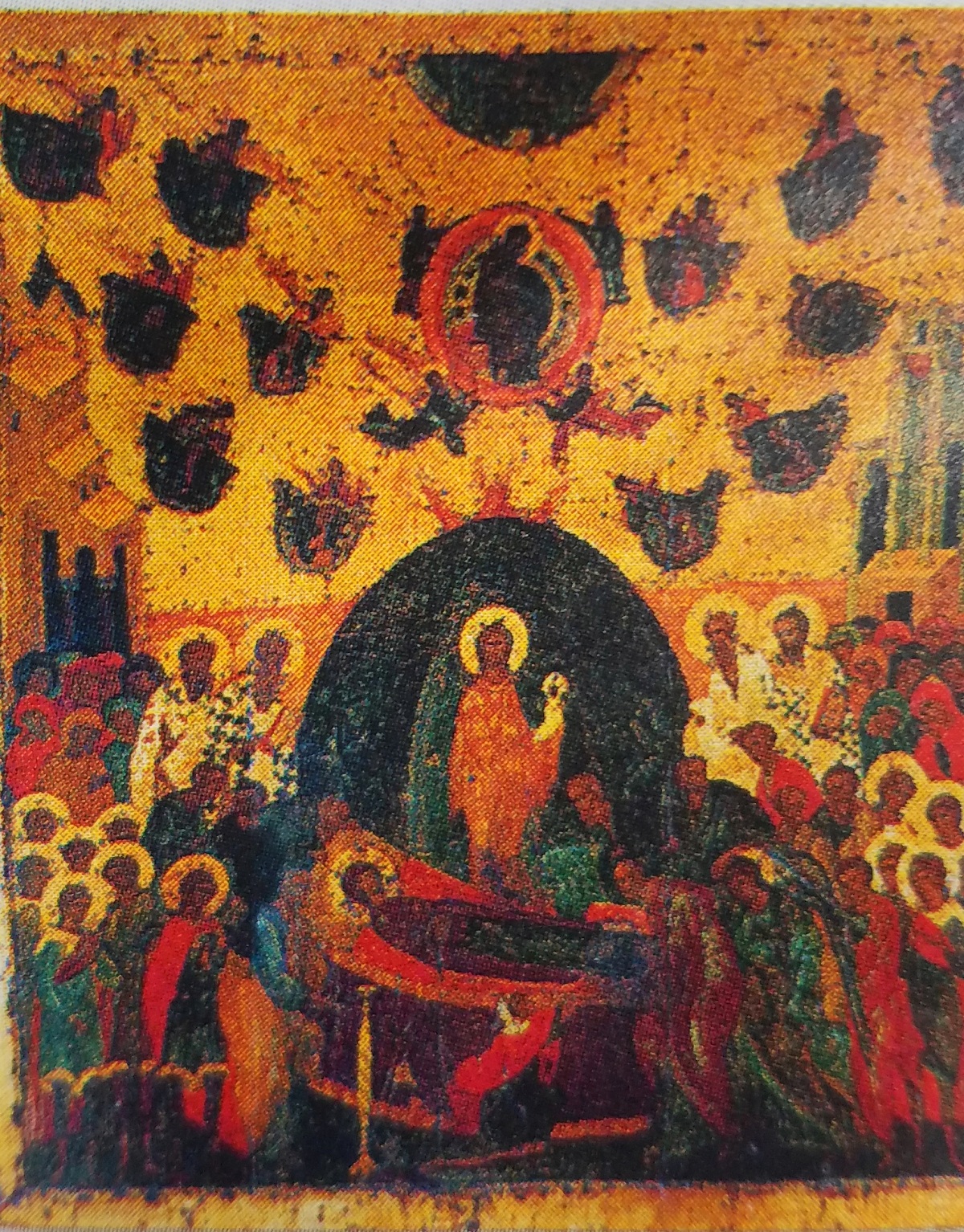 We spent another half day at the Armory. (Note: Tickets for the Armory should be purchased ahead of time or plan on arriving early to get in line and snag tickets for the same day). The collection of opulent objects from the days of the czars housed in the Armory museum is staggering. Among them prayer books belonging to Cardinals encrusted in rubies and pearls; swords and daggers adorned with precious stones; horse saddles, bridles, reins and stirrups that are works of art and extravagance; carriages that are straight out of a child’s fantasy world; intricate, delicate ornaments made by the House of Fabergé for the royal court, including a collection of Fabergé eggs; and elegant hand-stitched gowns made from the finest fabrics worn by the czarinas, some as stylish today as they were then. I could just imagine them being worn on today’s Oscar Red Carpet.

Jewels in the Armory.
Uniform of Czar’s Guard.

The Kremlin Palace is where the President and his immediate staff conduct business. Presidential Inaugurations are held here and world leaders get the opportunity to walk its glittering halls. Tours can be arranged – however- they should be booked well in advance because they are only available several days a month. Private tours may also be arranged if you are willing to pay the hefty price. 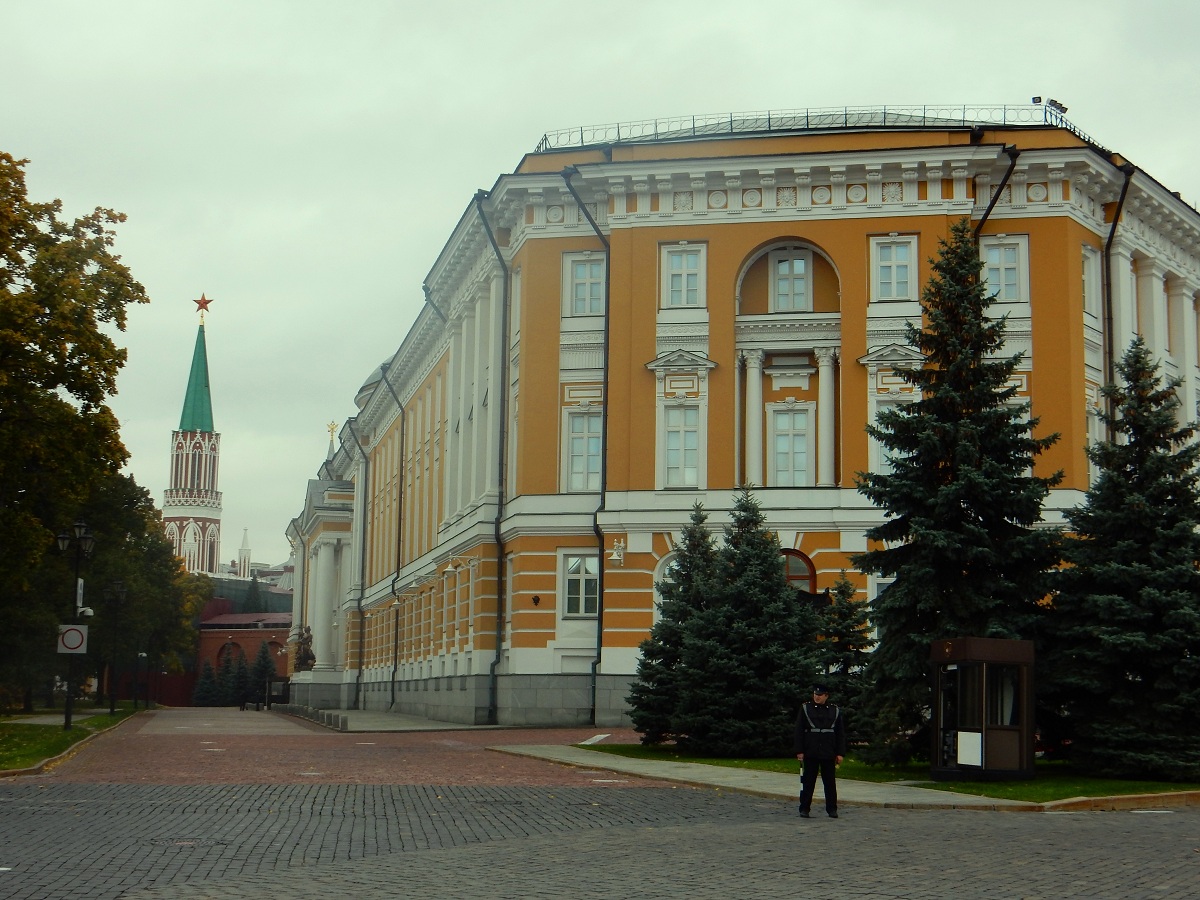