The Condors of Colca Canyon – Peru

From the outskirts of Arequipa, the road climbs into the mountains around hairpin bends through a protected nature reserve where Vicuna, Llama, and Alpaca run wild. Unusual species of birds and ducks populate the little lakes that have formed from the melting ice on the snow-capped peaks, in this otherwise barren landscape. 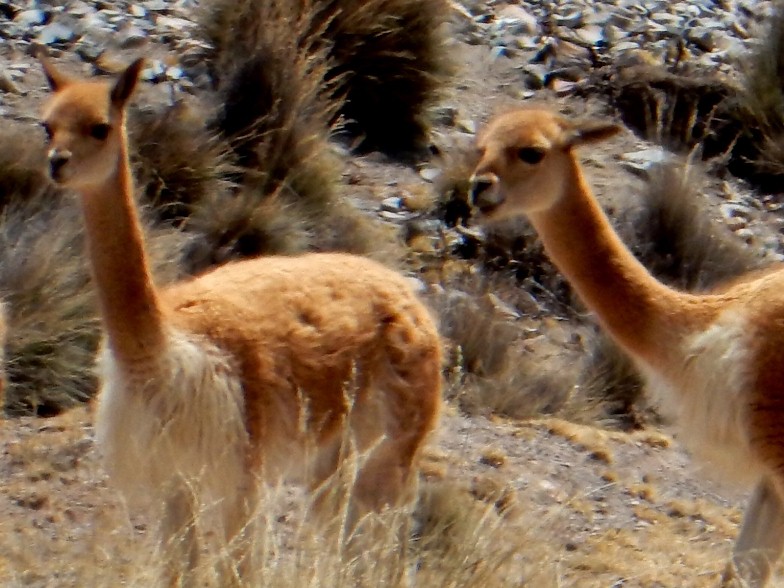 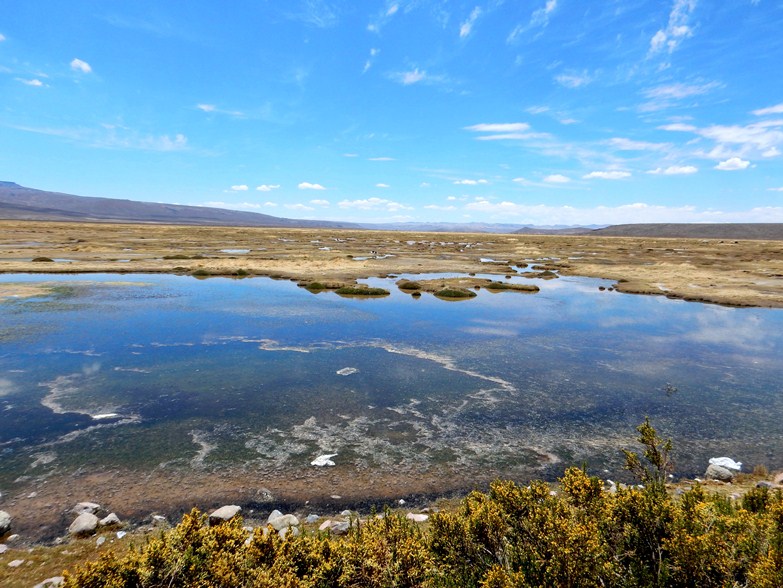 At 16,000 feet above sea level, way above the clouds, we stopped to view the majestic dormant Ampato Volcano that stands beside the Sabancaya volcano, which sends a constant plume of smoke into the clear blue sky. I walked out among the small piles of balancing stones built by the Inca to honor the gods of the volcanoes and ask them that they be granted a safe journey. 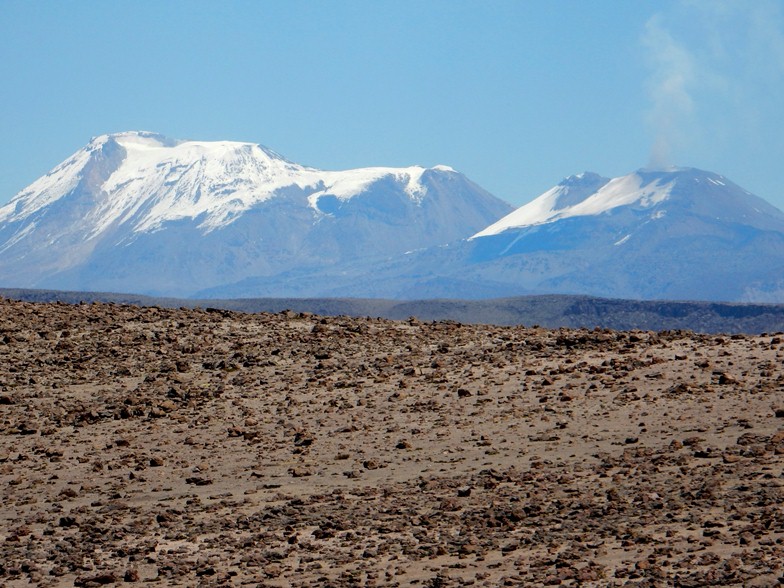 I took my time building my little pillar of rocks in the icy morning sunshine. The air was incredibly crisp and pure; the silence absolute. I stood there staring at those two proud, strong, majestic volcanoes, completely lost in time and space, absorbing the inexplicable aura of spirituality that radiates from the landscape. 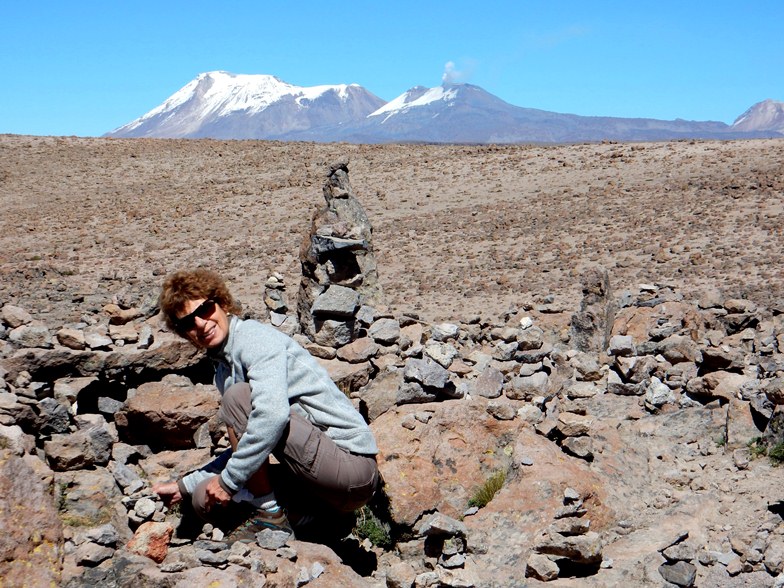 Several hours later we reached Chivay, a small town that snuggles into the bottom of the Colca Valley. There we checked into Hotel Casa Andina, where rustic bungalows line cobbled, tree shaded, pathways, and a planetarium stands on the grounds of the property. At night, the sky above Chivay and Colca Canyon is upholstered in sheets of star studded black velvet. On our first night, we were treated to a private stargazing experience. Just Stan and I and the resident astronomer. 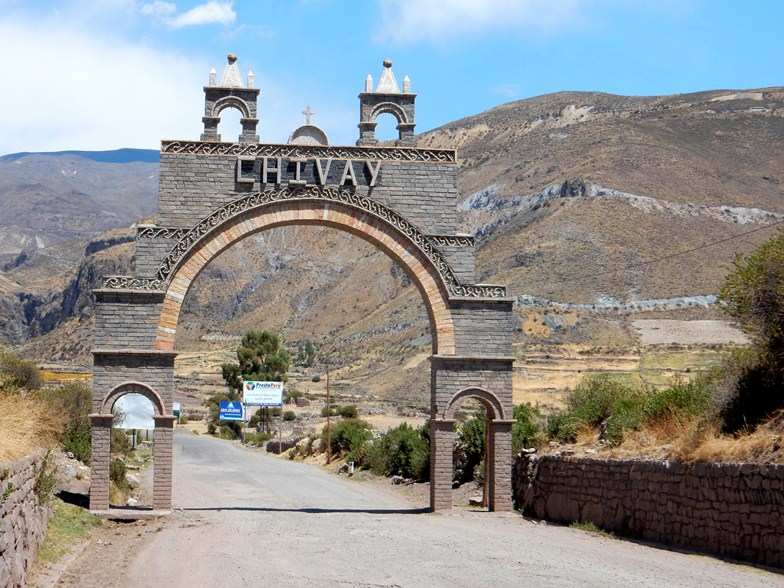 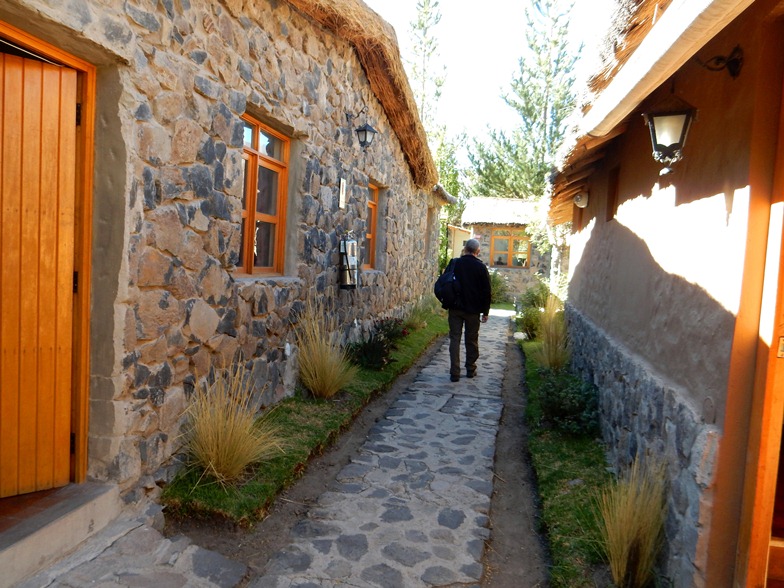 Our session began outdoors where he used a strobe-light to point out various stars and constellations. Inside the dark planetarium, he moved the ceiling panels one at a time, so that he could focus on one section of the sky at a time, then climbed a ladder and focused his enormous telescope before inviting Stan and me to take a look. It was a breathtaking sight. At times we were looking at a gazillion stars clustered together and at other times a single star, which shone as brilliantly as a ten carat diamond. 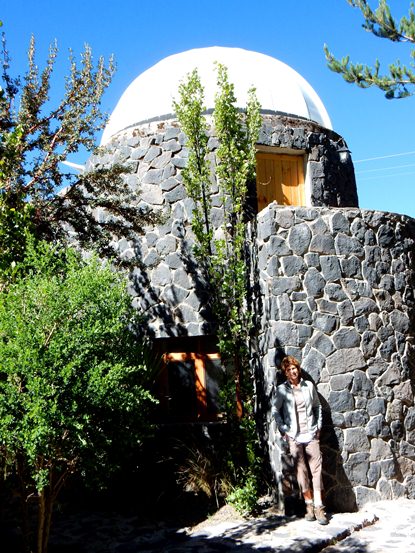 At sunrise, we set out for Colca Canyon. We drove, then left the car and hiked to the highest viewpoint and waited. As the sun rose higher and the chill in the air wore off, there they suddenly were: Several majestic condors, their wingspan measuring up to 10 feet, gliding silently upwards from the canyon floor. Two of them soared directly overhead. They are magnificent creatures. No wonder the Inca revered them together with the sun, the stars, the moon and the wind, to be the owners of the ‘higher world.’ Within ten minutes it was all over, as they flew off to hunt for food. 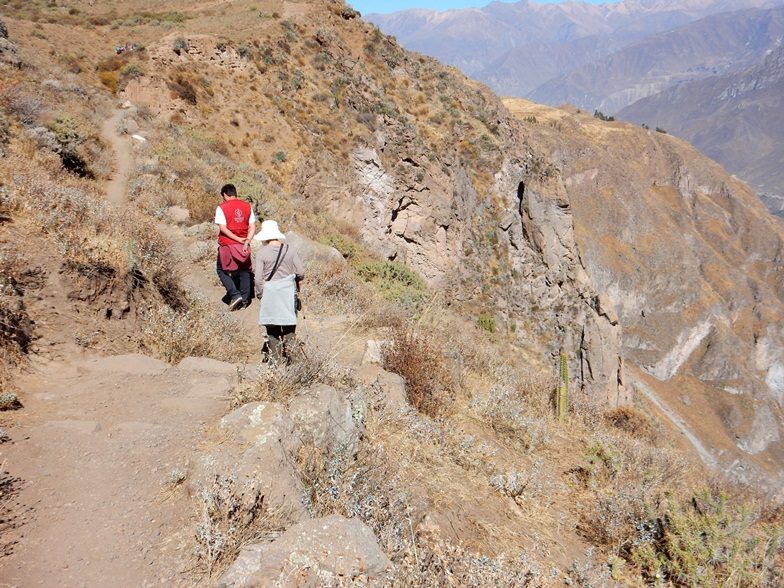 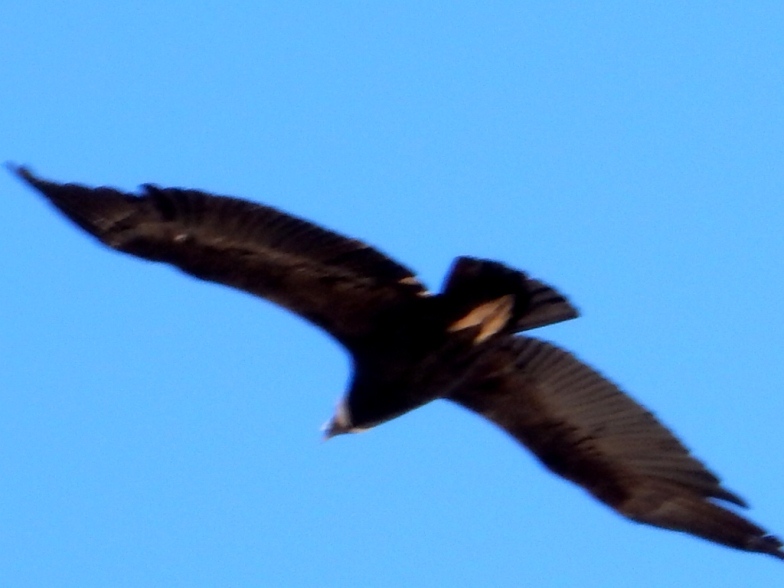 We drove through the terraced valley, inhabited by the Cabānas and Collahuas for the past 1500 years. When the Spanish arrived in the area in around 1540, they moved the indigenous people into villages which were always built around a plaza dominated by a church. As in most parts of South America, the local people were forced to adopt Christianity. Today they practice a blend of Christianity with a large dose of beautiful, ancient, Andean beliefs. 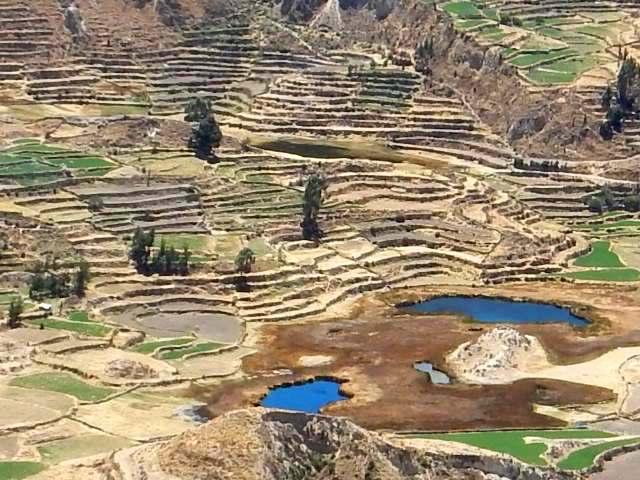 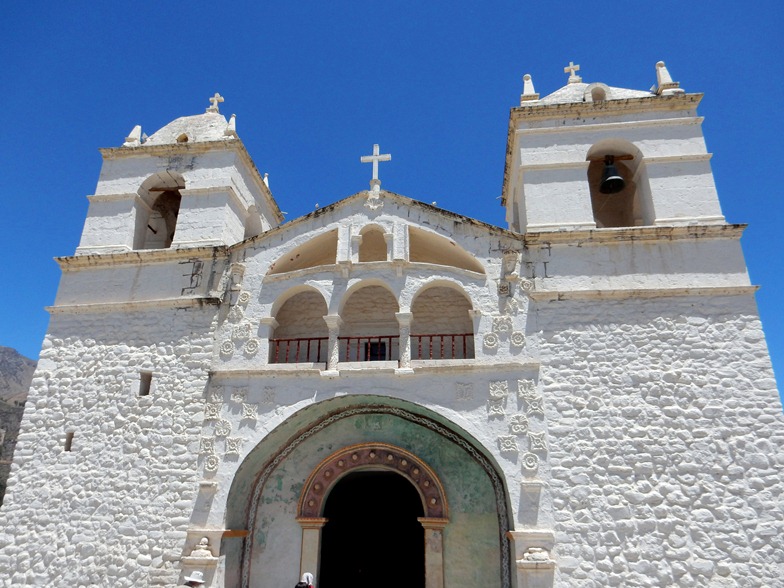 While the Cabānas and Collahuas coexisted harmoniously in the valley and the canyon, they differentiated themselves from one other by the shape of their heads. From infancy, the Cabānas would tie a plank of wood to the top of a child’s head and one beneath its chin to flatten their heads, and the Collahuas would elongate their heads by tying two wooden planks to either side of the head.

When the Spanish put a stop to this custom, the women of the two groups began wearing different shaped hats. One hat has a brim that curves downward while the other has a wide brim. The women’s outfits are the most elaborate and elegant that we’ve ever seen worn by indigenous tribes. They wear full length dresses in shades of rose, turquoise, or peach, with layers of petticoats underneath. The hems of their long skirts are decorated with lace, embroidery, and tiny pearl-like white beads. Their hats are beaded and embroidered in the same colors and patterns as their waistcoats. Dressed in this gorgeous attire, they tend their stalls in the marketplace – where skinned carcasses of llamas, defeathered chickens, and a mindboggling variety of potatoes, quinoa, fruits, vegetables, and grains are for sale – and tend their sheep and llamas in the fields. 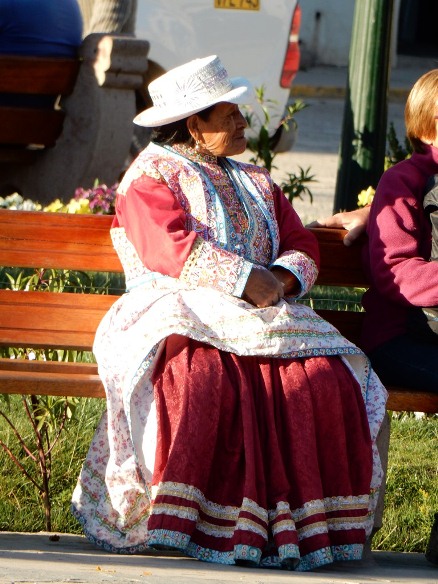 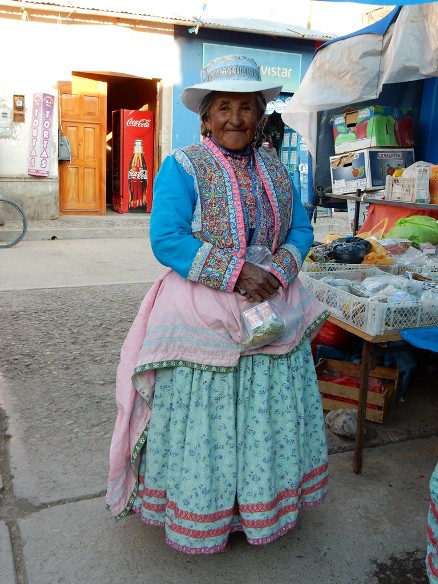 As the sun began to set in the evening, we drove out of the village into the mountains to the Calderas (hot springs). The water boils at 90 degrees and sends steam, smelling of sulfur, into the air. I’m generally not a fan of sulfur pools, however in these swimming pools built into the rocks under the star filled sky, the sulfur smell has been removed, the water is like silk, and the temperature is just what a nice hot bath should be. Stripping down to a bikini in the ice-cold air took an act of courage, but every aching bone and muscle in my body was most grateful for my bravery. Just to add to the magic of the setting, the staff was serving Pisco- Sours and Pinā Coladas to the bathers in the pool.

Tourists, who make the exhausting trip of departing Arequipa at 4:30 a.m. to arrive at the canyon by 9:00 a.m., see the condors, have breakfast, and then return to Arequipa all in one day – miss out by not spending at least one night in the area.

There are villages caught in a time-warp to be explored, a local guide can lead one on great hikes, and the small town of Chivay is charming especially in the late afternoons, when it comes alive with residents socializing around the plaza and painted tuk-tuks buzz and bump their way along the dirt roads ferrying people to and from the market place and town center. 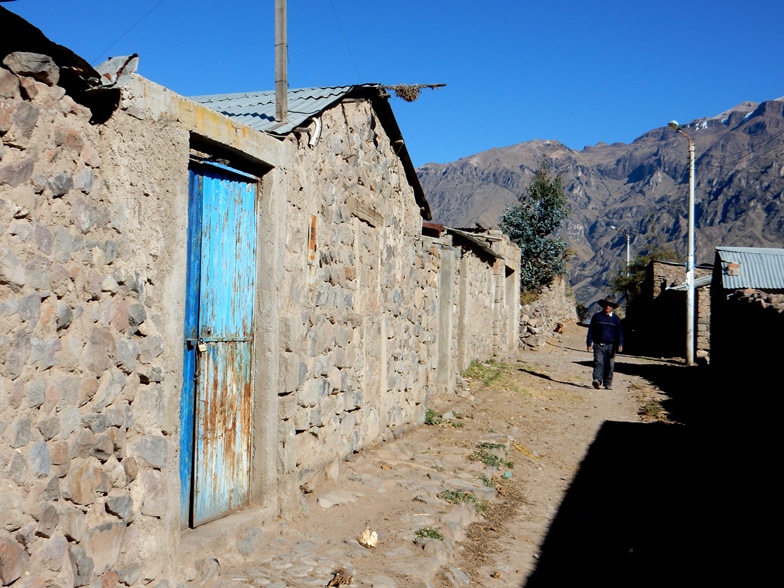 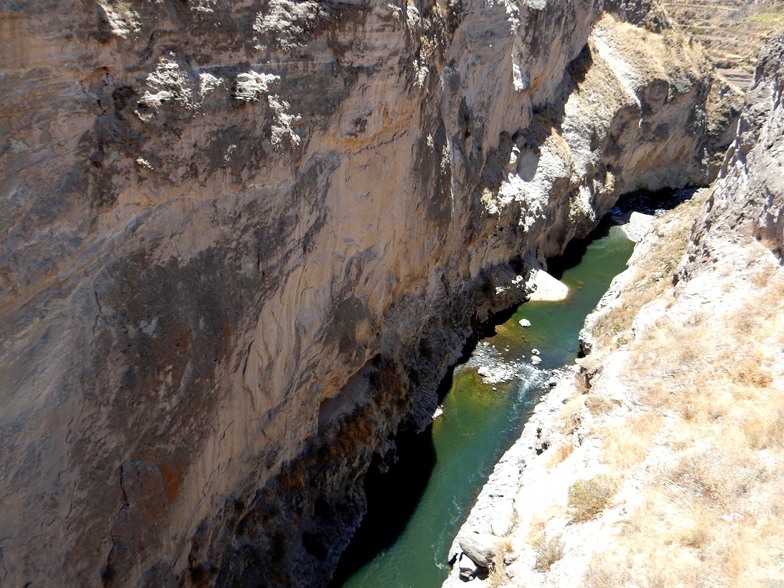 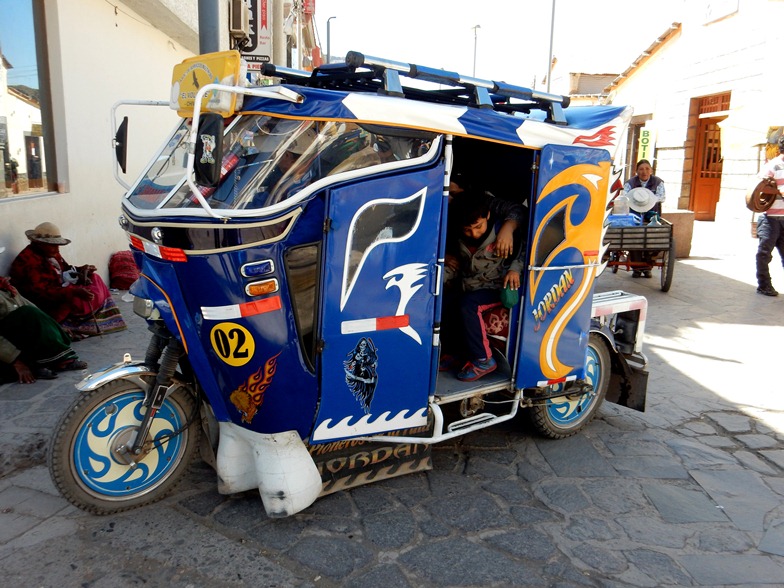