Chiapas-Mexico.
So close to the USA. and worlds apart

I arrived at the airport in Tuxtla Gutiérrez at the break of dawn. A young Mario Andretti holding a sign which bore my name was there to meet me. A twenty something cool dude wearing dark shades, who spoke not a word of English. He carried my luggage to his gleaming little red Volkswagen, strapped himself into his seat, turned up the music so that the car pulsed and rocked to the Mexican beat, and shot out of the parking lot onto the road that climbs for an hour around hairpin bends to San Cristobal de Las Casas. Mario was definitely imagining that he was taking part in the Grand Prix! Though my heart had sunk into my stomach, I dared not disturb him at that speed for fear that he would take his eyes off the road that zig-zagged skyward into the limestone peaks shrouded in mist. When the mist cleared, the landscape opened up below us like a huge patterned fan. It was such a glorious sight that I forgot about Mario spinning around the bends and lost myself in the spectacular view.

San Cristobal is a Spanish Colonial town which nestles in a valley surrounded by mountains. Although tourism has blossomed here, it hasn’t overtaken this charming little town the way it has in towns like San Miguel de Allende, where an invasion of foreigners have put down roots and are fast eroding the very charm that drew them there in the first place. 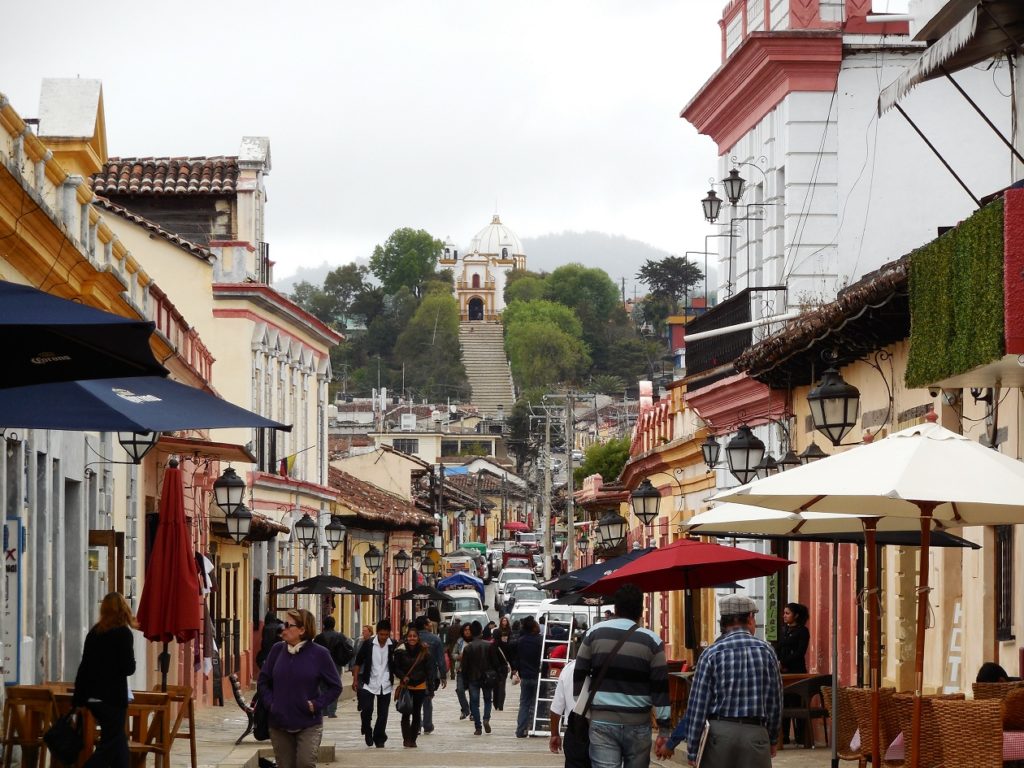 I stayed in a gorgeous B and B. An historic home lovingly restored to its original beauty with heavy old wooden doors, wrought iron, ceramic Mexican tiles, and comfortable antique Mexican furniture. Flowers and foliage spill out of planters in the courtyards, and the rooftop patio offers up a stunning view of the surrounding mountains. 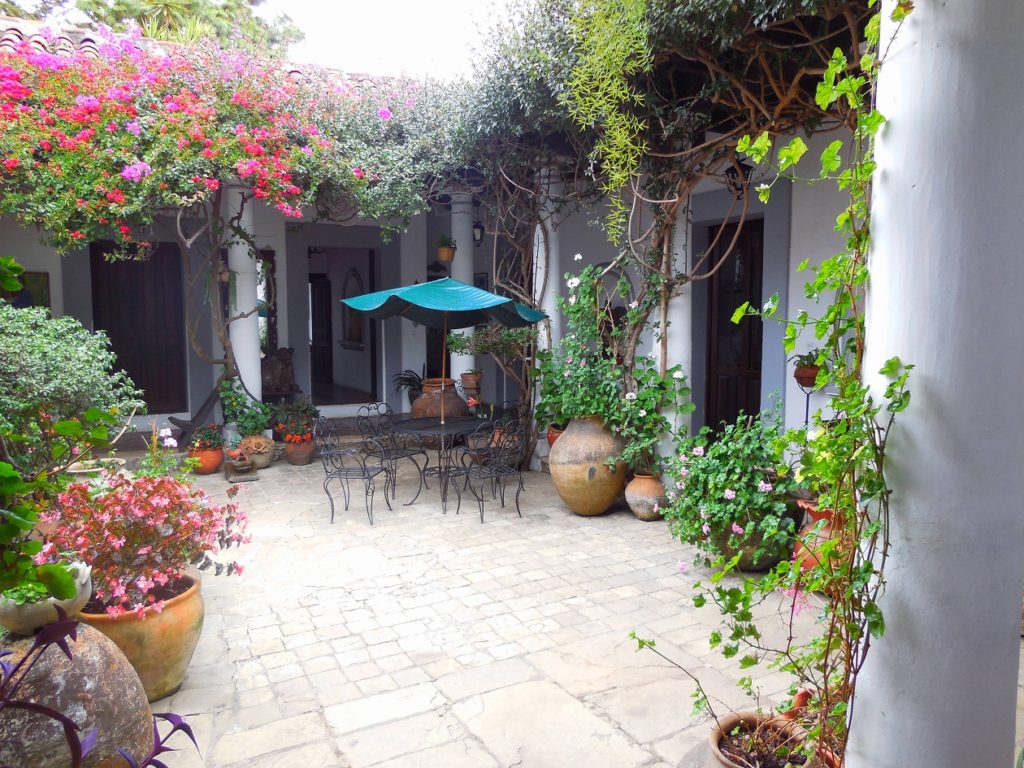 As I stepped out onto the smooth narrow cobblestone streets, the aroma of coffee and chocolate drifted toward me. There is no shortage of vibey little coffee shops, freshly baked pastries, chocolate and Pox in San Cristobal. Pox is an alcoholic brew made from fermented sugar cane, corn and fruit.

I wandered along the streets making my way to Calle Utrillä which leads to the local market. Markets draw me like a magnet and the San Cristobal market is the most fascinating of all the Colonial Town markets that I have visited. Here the indigenous people from all the surrounding towns come to buy and sell their produce and crafts. The pungent smell of plump mangoes, juicy pineapples, ruby red flawless strawberries, golden bananas, and peaches ripened to perfection, fills the air.

There are few foreigners to be seen. The indigenous people are clothed in their traditional dress and the vast marketplace is a hive of activity. 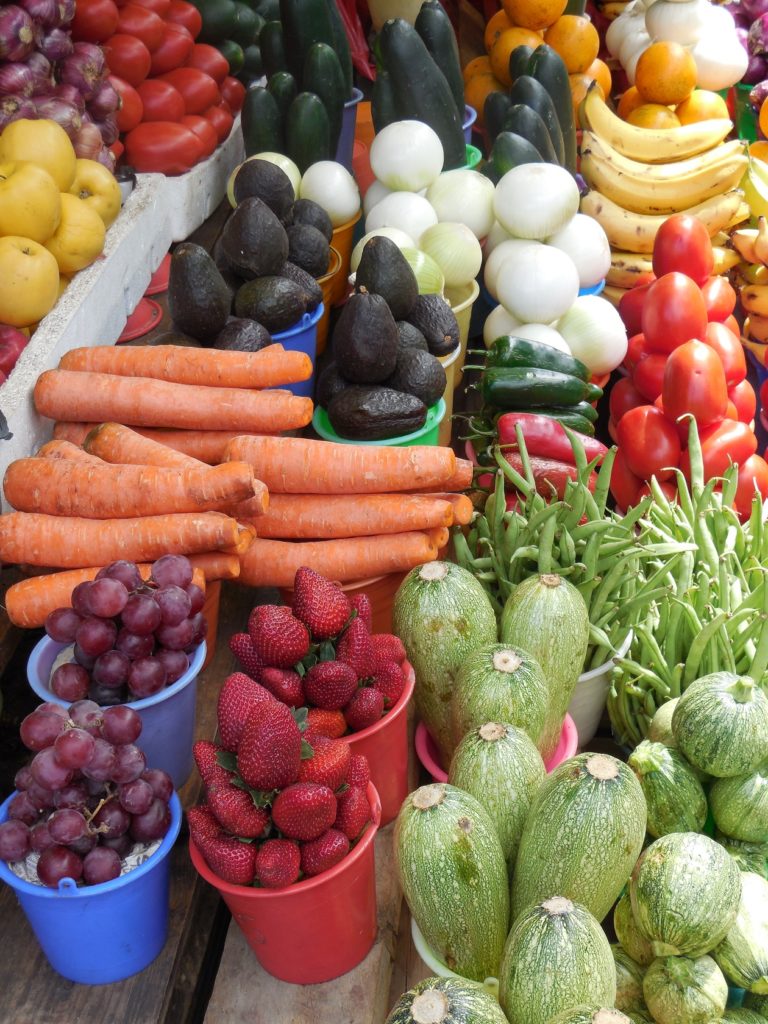 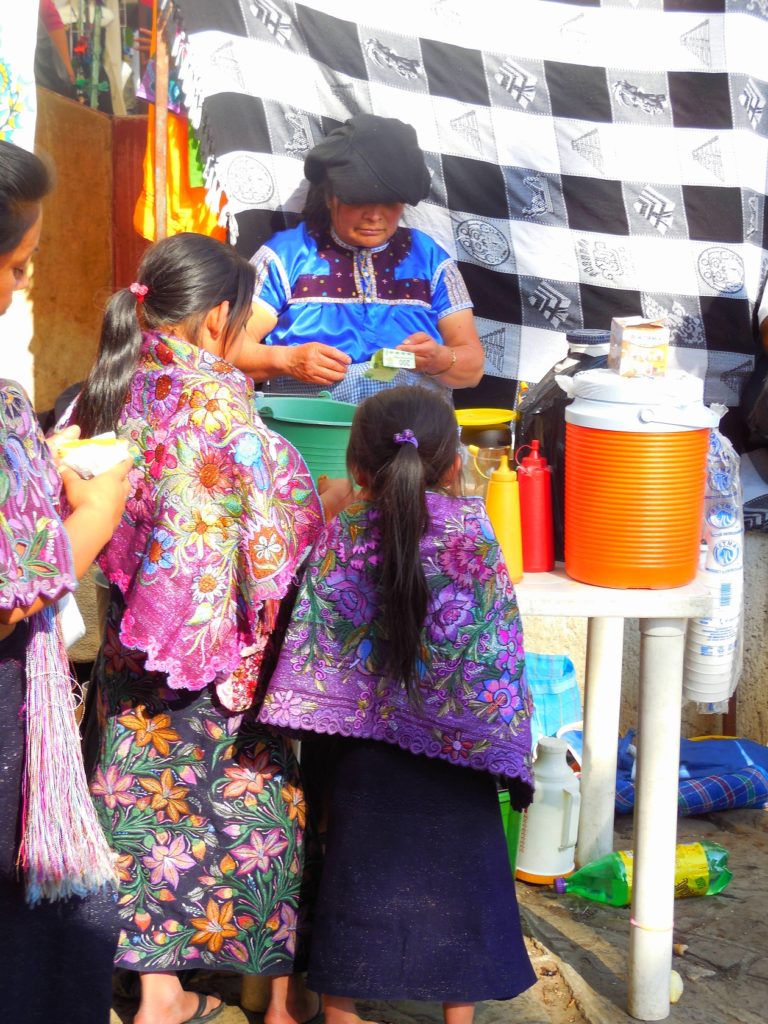 The next day, I ventured out of town into the surrounding mountains with a diminutive local guide – Maria Teresa Santiago – to visit the indigenous Chamula and Zinacantan people.

The people of Chamula known as the Tzotzil Maya, practice a religion which is a blend of Catholicism and ancient Mayan traditions. They are fiercely proud and intolerant of any outside beliefs. The women dress in long skirts made out of the raw wool of long haired furry black sheep, colored pleated silky blouses and thick matching cummerbunds around their waists. The men wear long ponchos made out of the same furry wool.

We entered the blue and white church which stands on the main plaza of Chamula, and I literally gasped at the sight that greeted us. There were no pews, the floor was covered in fresh pine needles, and the church glowed with the gentle light of thousands of candles. The walls were white stucco; the ceiling was supported by dark wooden beams, and from the beams hung an expanse of embroidered fabric forming an archway above the worshippers. Women sat on the floor on the left, familiesdown the center and men on the right. Worshippers had set out row upon row of glowing candles among the pine needles, each row in honor of a family member to be blessed during the ceremony.
The priests wore pure white woolen fur ponchos and headbands with embroidered strips of fabric attached to them, which gave the effect of a fan adorning the back of their white ponchos.

We observed a family who- seated facing a female shaman- had brought their infant son to be blessed. The family had supplied a live rooster, herbs, eggs, Coca-Cola, Tequila, Pox and other beverages. The shaman took hold of the rooster, waved it over the head of each family member, broke its neck with one snap – then waved the fragrant herbs above each family member in turn. Next she dug her bony gnarled fingers into the baby feeling for its pulse and once satisfied, rubbed the smooth surface of an egg over the baby’s skin. The baby yelled on top of its lungs, and the family consumed a brew of Coca-Cola and Tequila – all in the name of cleansing and purification.
A mind boggling, other worldly experience, so rich in ancient traditions with incongruous new world touches.

A thirty minute drive higher into the mountains and we reached the Puebla of Zinacantan. I thought that nothing could be more extraordinary then what we had witnessed in Chamula – however, the sight that greeted us as we entered the nondescript looking Iglesia de San Lorenzo was poetic in its overwhelming beauty and serenity. Here the entire floor was covered in fresh rose petals and candles. The sweet perfume was intoxicating, the glow of the candles – mystical. A pre Easter ceremony was in progress.
Young priests were engaged in prayer. They wore gray-blue head scarves with iridescent tassels, and embroidered ponchos over their slacks.
The only women present were ten shamans with weather worn lined faces, who sat on the floor along the opposite wall to the elder priests. They were attired in black skirts, white capes and white bonnets. A string of beads hung around their necks and each bead was attached to a long strip of brightly colored ribbon. In their hands they held two tall oblong palm leaves, wrapped around a tall tapered white glowing candle. Behind each wizened old woman stood a young female shaman in training.

The beauty of that scene from another time and another place, hangs like a painting in my memory.
Unfortunately — or fortunately because these ceremonies can never be commercialized and advertized to the outside world — photo taking is strictly forbidden.

There is so much to see and uncover in Chiapas: Extensive caves, waterfalls, villages, the Canon del Sumidero, and at the heart of it all, the delightful town of San Cristobal de Las Casas. 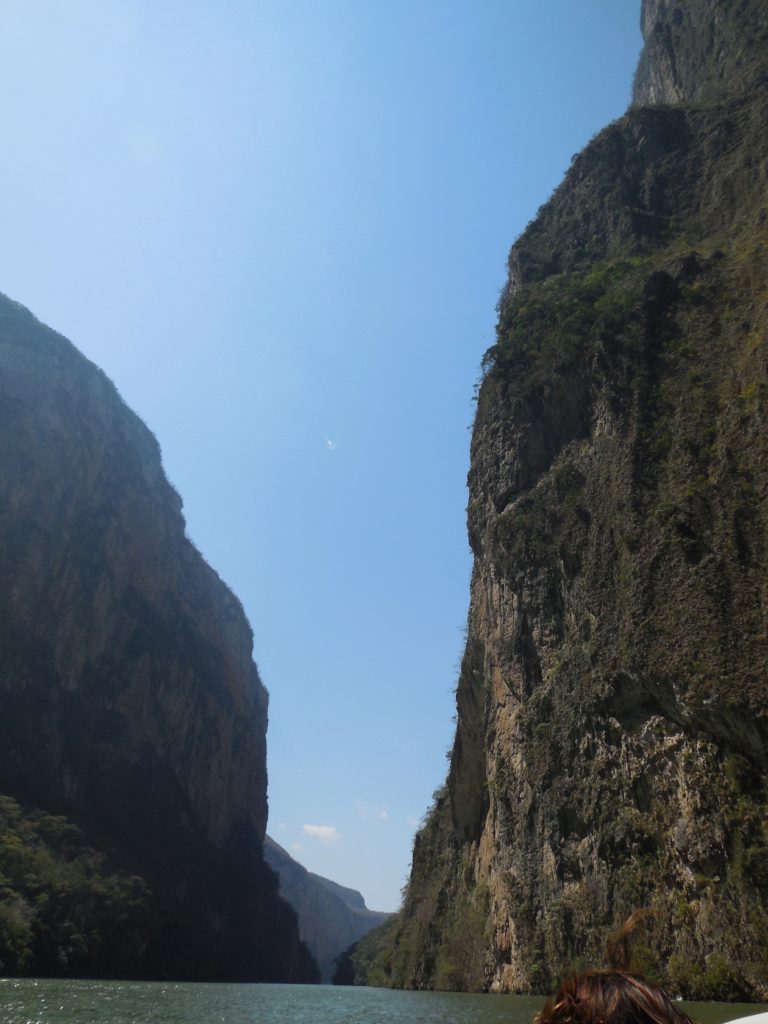 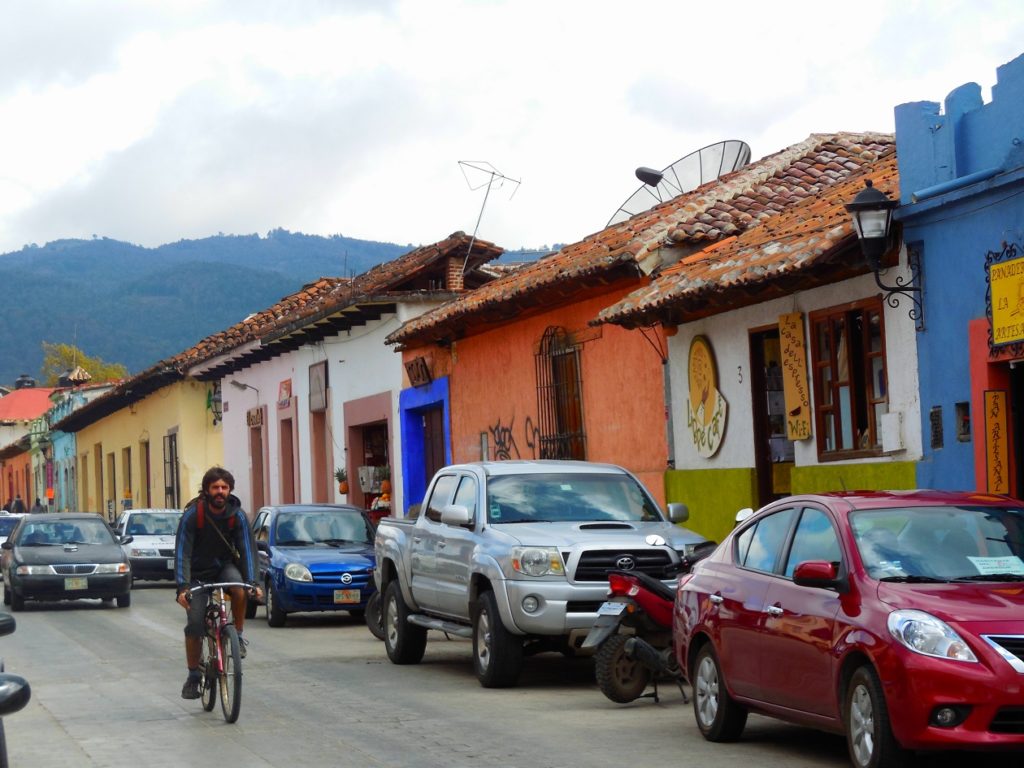