The Peres Center For Peace and Innovation – Jaffa

If I had time to visit only one museum in Tel-Aviv, it would be the Peres Center for Peace and Innovation.

The vision and creation of the late Prime Minister and President Shimon Peres, the center promotes:  sport that unites children of every religion, ethnicity, and background; cultivates entrepreneurship and leadership; and breakthrough innovation in medical science, agriculture, business and technology, energy, and communication. 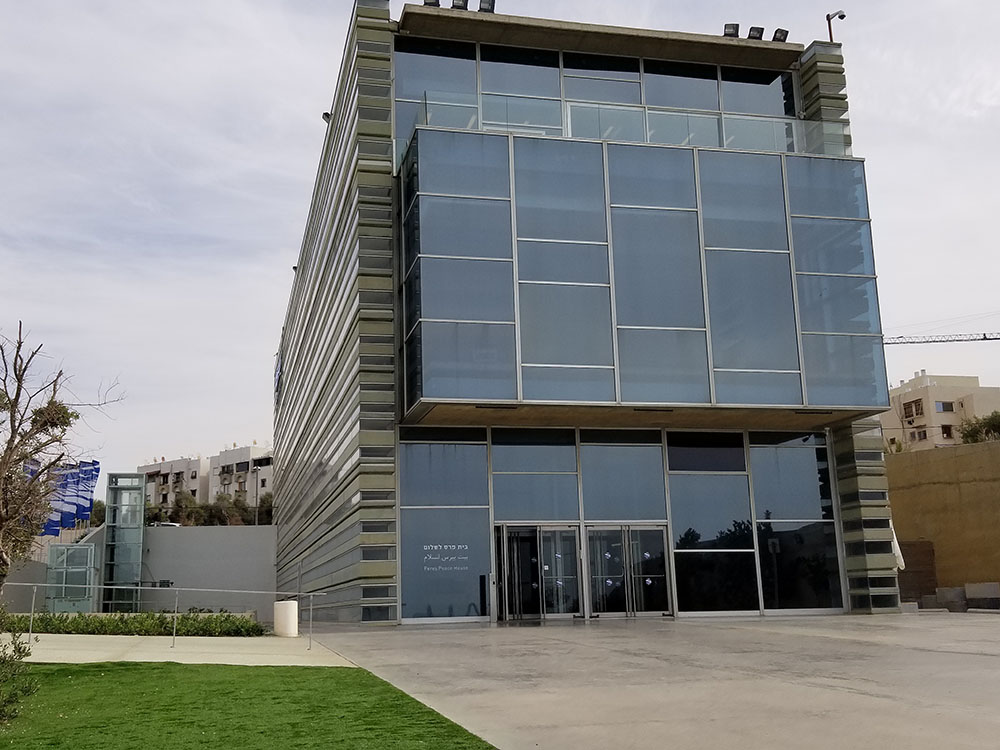 The guided tours, offered in Hebrew, Arabic, English, and Chinese, take one on an interactive journey of discovery with Israeli innovators and entrepreneurs who have earned Israel the name “Start-Up Nation.” 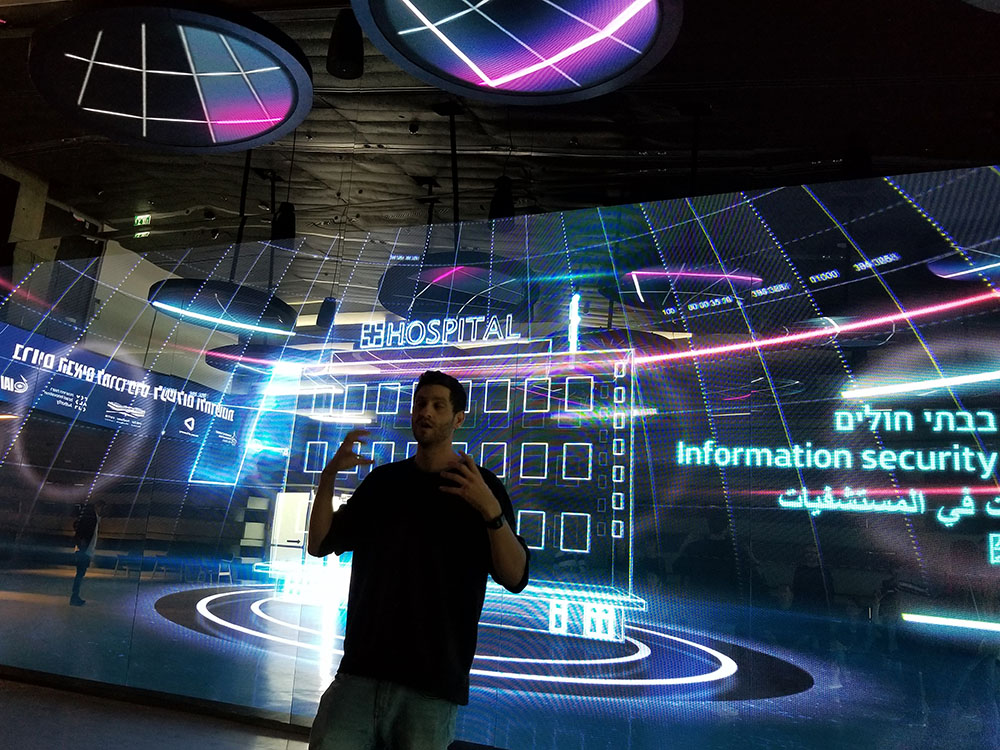 In the first hall, one gets the opportunity to interact with life-sized innovator holograms from a variety of backgrounds and different fields. Among them, Waze – how did we ever navigate the streets of crowded cities and remote towns without WAZE? The flash drive that revolutionized how data is transferred and stored, and other mindboggling inventions, which generations ago would have been considered science fiction, such as Na-Nose that can sniff out cancer and other illnesses.

The visitor can ask the innovators how they came up with their ideas and the challenges that they faced in transforming their ideas into reality.

The Innovation Nation Room deals with innovations in a myriad of fields that have earned Israel the name:  Start-Up Nation.

In “The Capsule,” visitors sit in airplane-type seats, don headsets, and take a trip into the future. What will we eat, how will we travel, communicate, navigate over-crowded cities of the future, etc.?

The Israeli Expo is exciting as it focuses on the current Israeli Start-Ups in an array of fields from Agriculture to Aerospace and everything in between.

Peres understood that in Israel – a land lacking in natural resources – human capital is the finest resource that the country has.

The center looks out at the Mediterranean Sea and a sculpture that reads: “Dream Big.”  Peres’ message to all who visit is that they should dream big and never stop dreaming and believing no matter what stumbling blocks they may encounter. 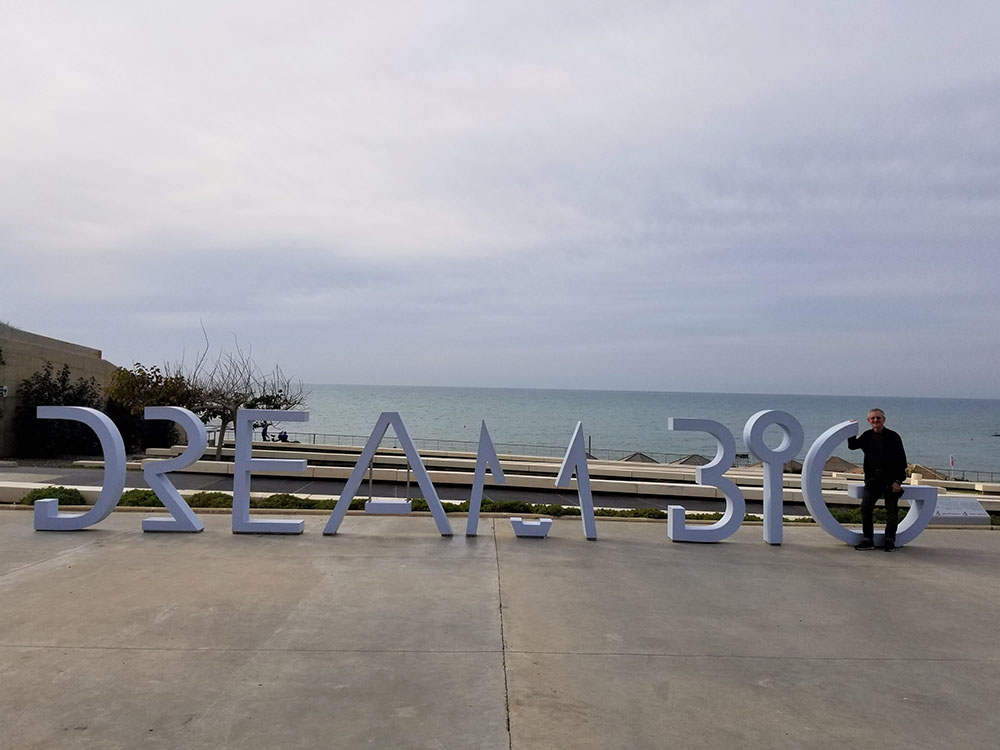 **Reserve well in advance on the museum website: www.peres-center.org. Also, make sure to reserve a tour that will be given in your desired language.

Tip:  End your visit with an al fresco lunch at Cassis – a restaurant adjacent to the museum that hugs the beach and looks out to sea.

Two hundred and fifty years ago, pilgrims to the Holy Land took shelter in a hostel built of solid stone on a narrow-cobbled lane in the Old City of Jaffa.

The historic building, which overlooks the port of Jaffa, was repurposed by Ilana Goor – designer, artist, sculptor, and art collector – into her personal residence and a museum, which displays her rare and vast collection. 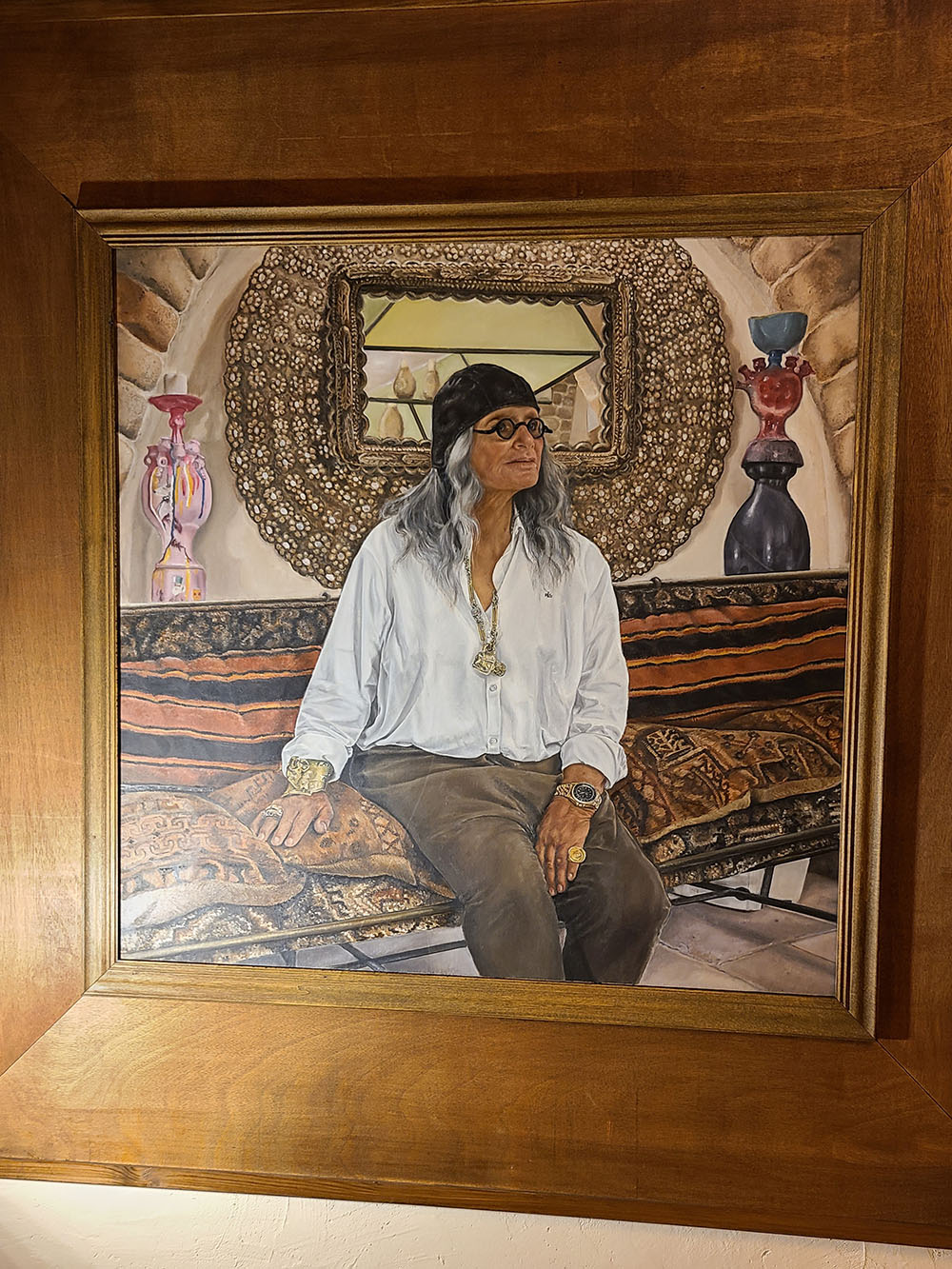 A Portrait of Ilana Goor. 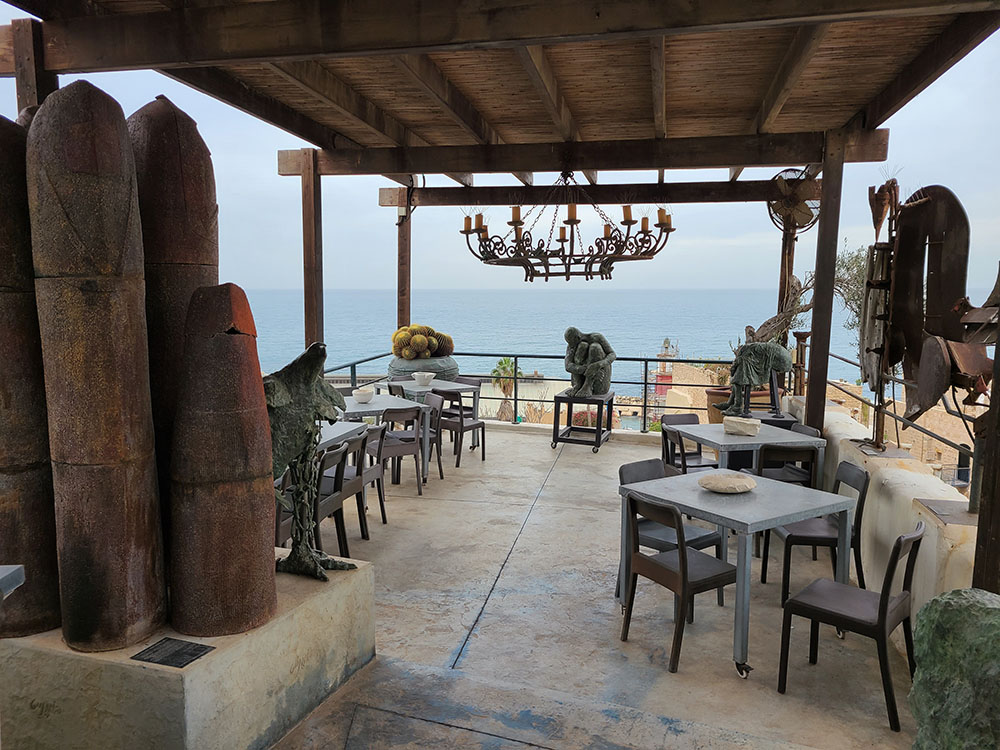 The Museum Overlooks the Mediterranean sea.

Ilana’s talent is unsurpassable. She designs and creates furniture, clothing, art, jewelry, and sculpture in every medium:  from wood, clay, fabric, and brass, to bronze and iron.

Dignitaries across the globe have purchased her pieces. They grace the halls of museums and outdoor plazas worldwide. 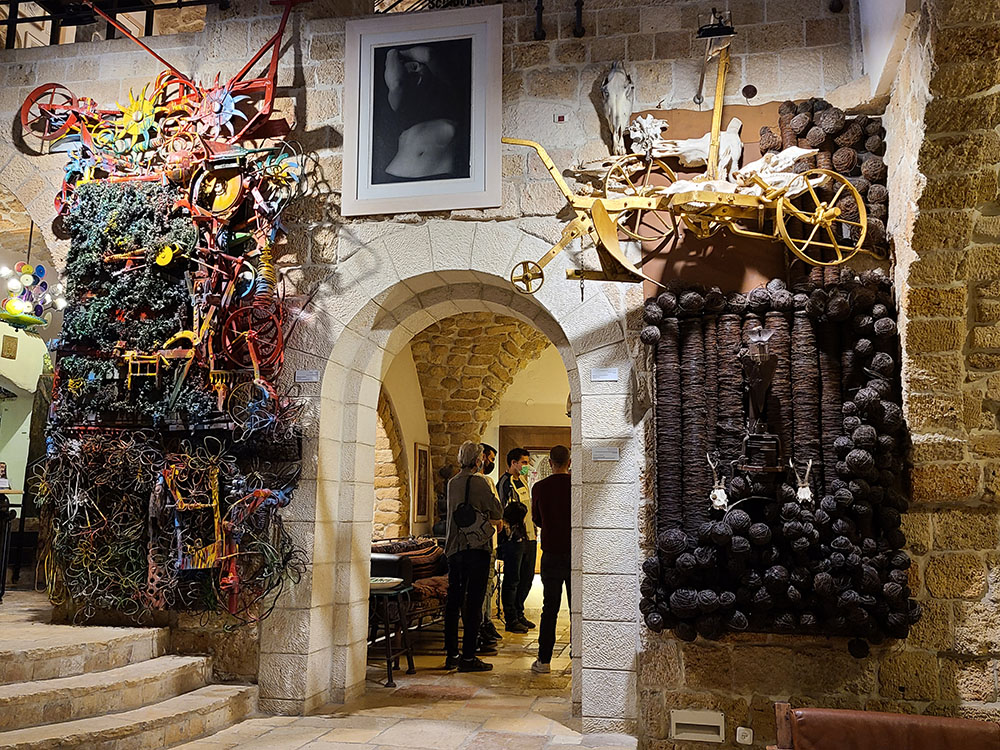 She’s a remarkable, inspirational woman who displays her art and one-of-a-kind collection in a rare setting. 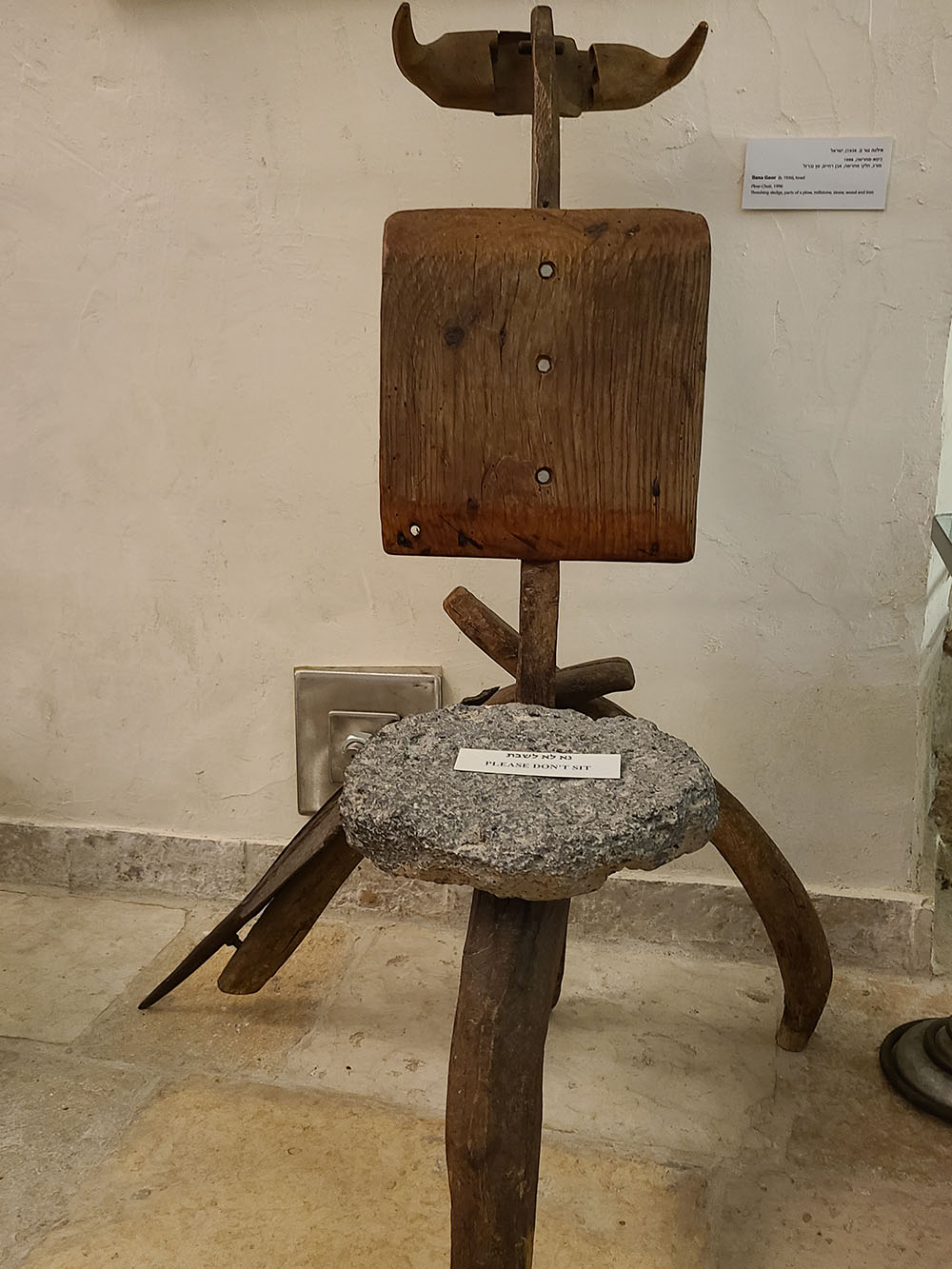 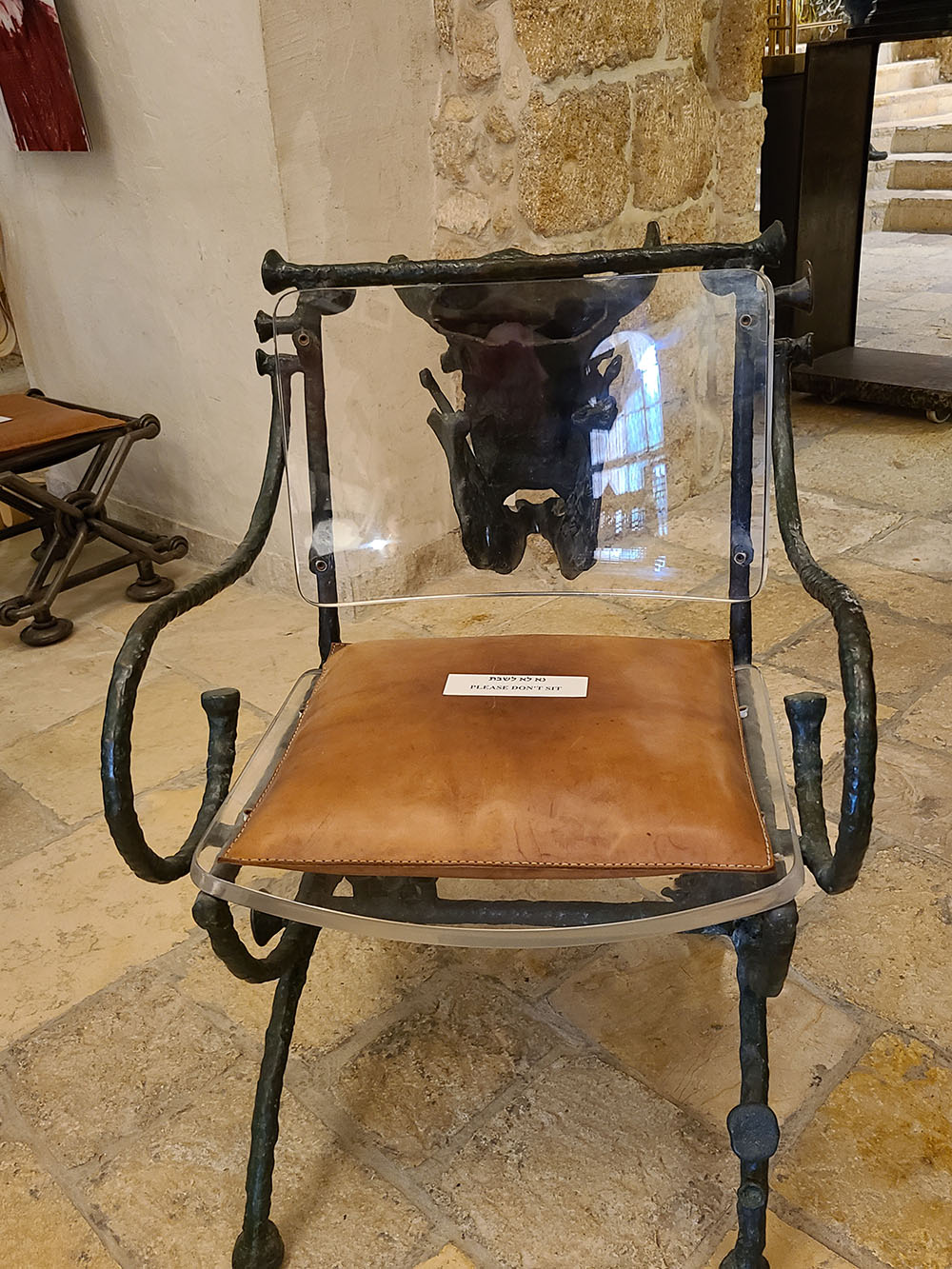 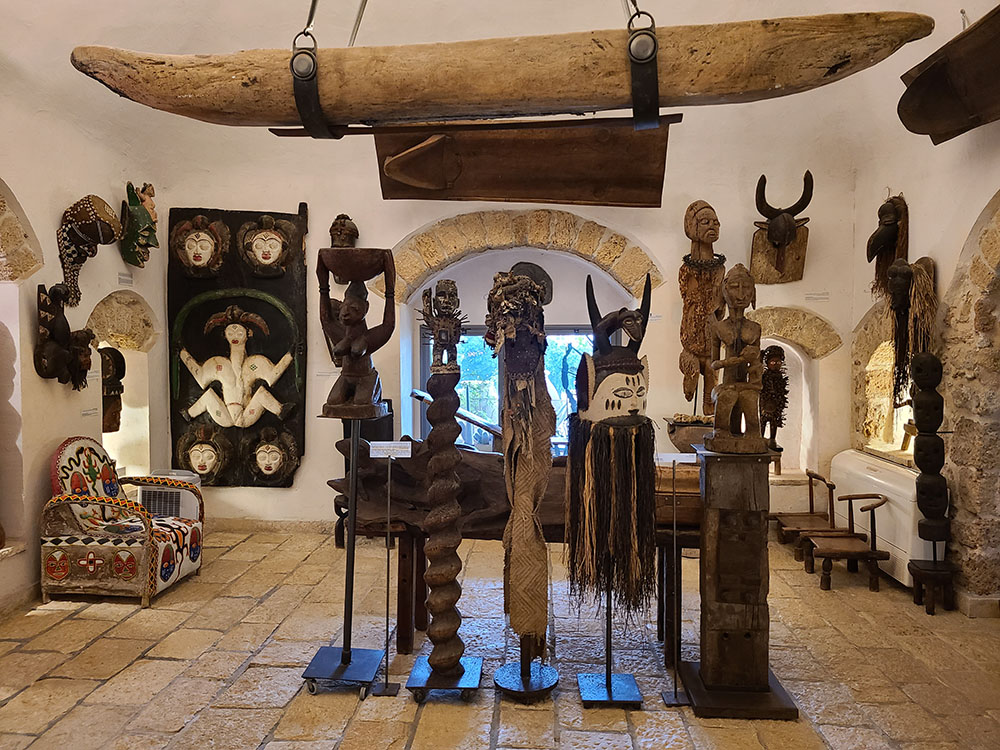 Yes! He really does bend spoons and coins right before one’s eyes. Uri Geller’s magical talent has entertained audiences on T.V. shows and live performances around the world, most of them skeptical until they see him in action. Then their eyes widen, their jaws drop, and a moment of stunned silence is followed by resounding applause. 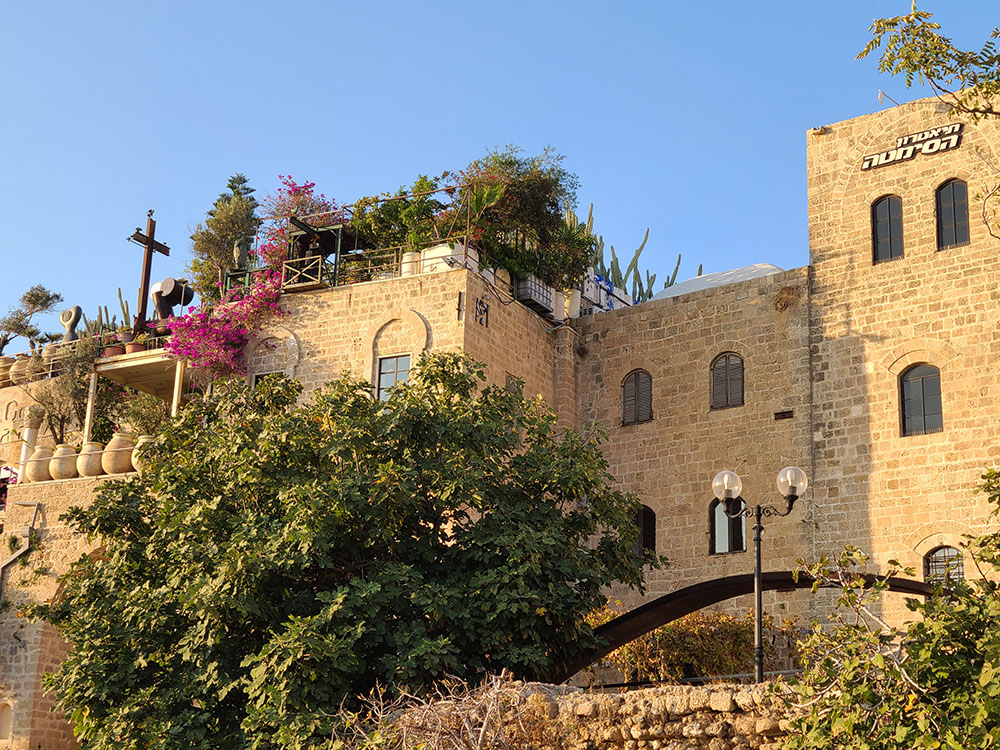 The steel sculpture is an oversized bent spoon.

Geller’s Museum is housed in an Ottoman Empire-era building with sweeping views of the ancient port. On display is a vast and varied collection of items either purchased or gifted to Uri:  from a gilded egg received from John Lennon, which the musician claimed allowed him to converse with aliens, to a display of the remains of the old Soap Factory, uncovered during the building’s renovation. 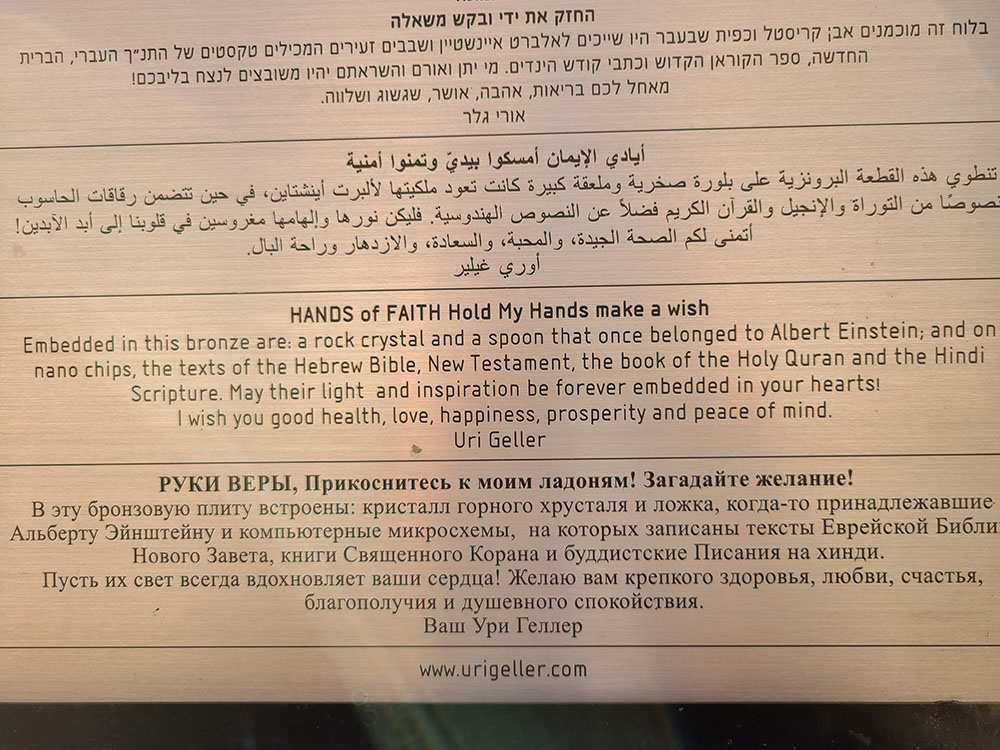 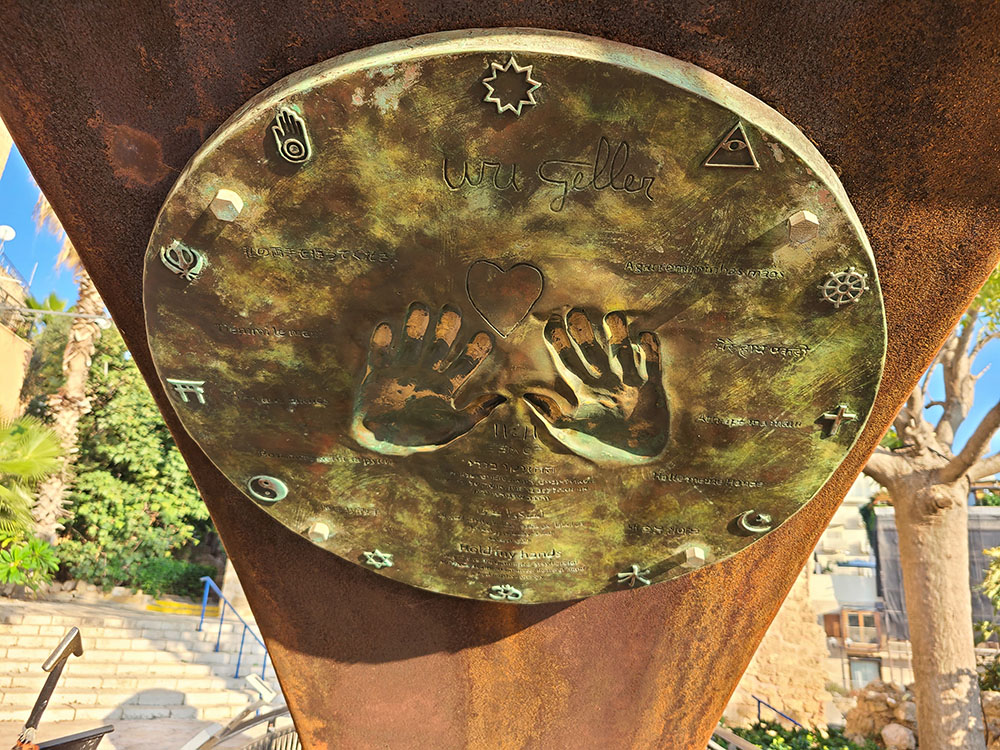 Guided tours for groups of 20+ visitors are led by Uri – magician, self-proclaimed psychic, and entertainer.

The Tel-Aviv Museum of Art

The Tel-Aviv Museum has a rich and diverse collection of Israeli, Modern, Contemporary Art, and visiting exhibitions. Its permanent collection of Impressionist art and 20th Century post-impressionist movements:  Fauvism, Cubism, Futurism, Dadaism, and Surrealism, is impressive. The Herta and Paul Amir building, with its angles, origami-like surface – which shimmers in the sunlight – its many layers, and interior lightwell, is an architectural masterpiece. 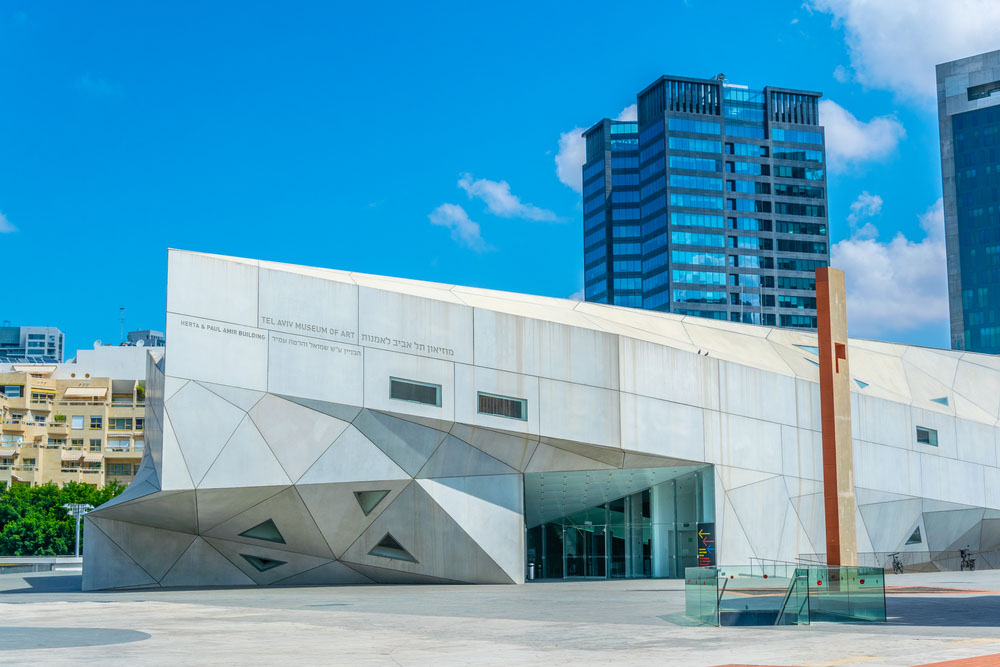 The structure is more than just a museum of art:  It has a concert auditorium, lecture halls, and an outdoor sculpture garden, where visitors can enjoy a meal at one of the restaurants in a garden plaza populated by sculptures. 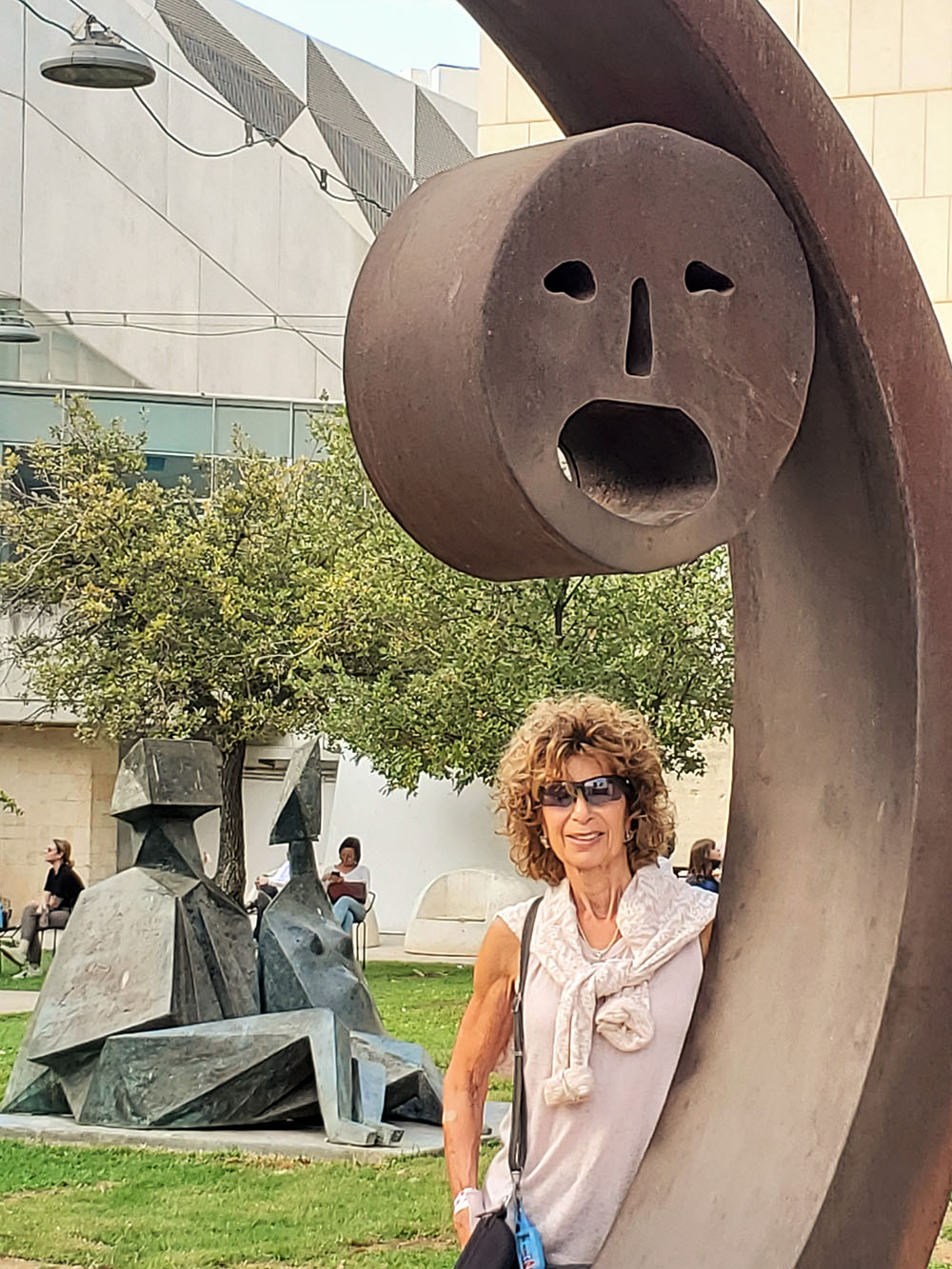 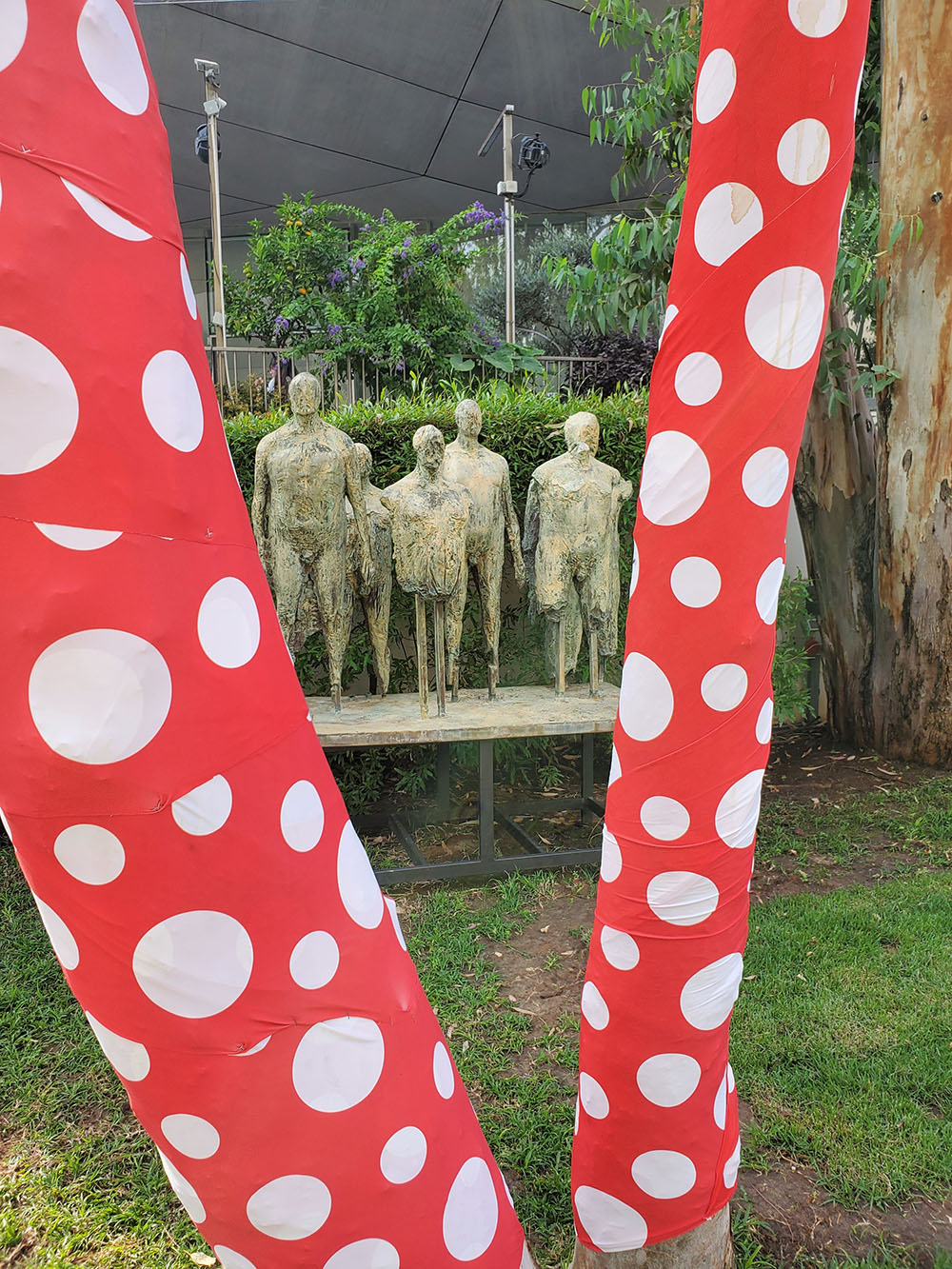 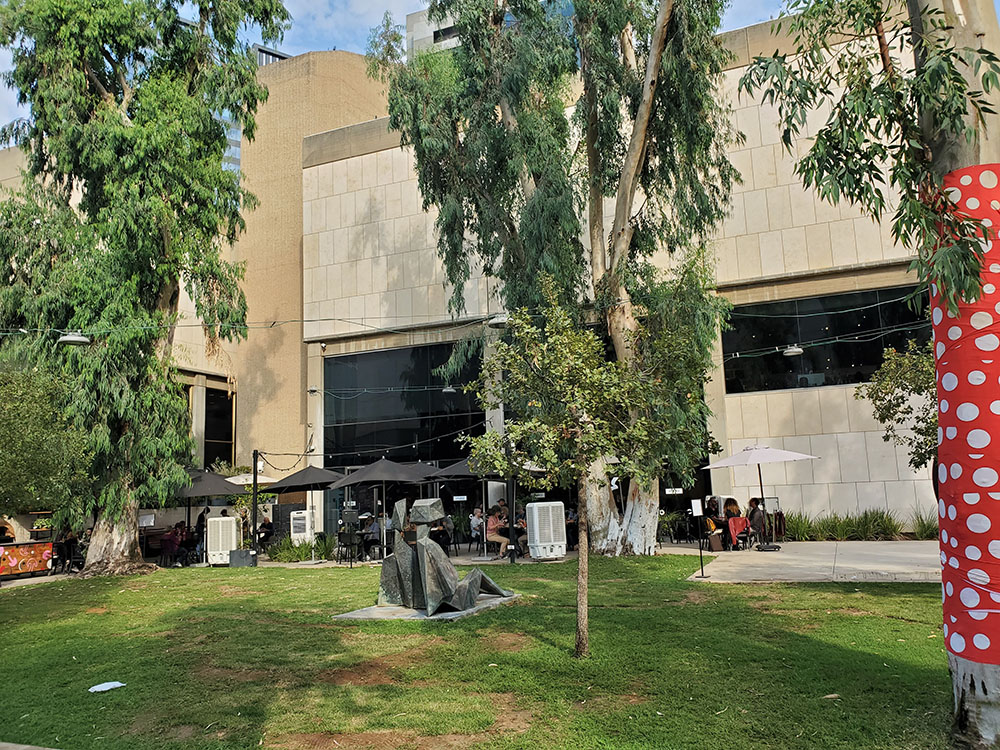 The Yitzhak Rabin Center is located in Northern Tel-Aviv in the Ramat Aviv neighborhood, just steps away from the university. It rests on a hill with a sweeping view of the city where Rabin grew up.

The flow of the museum as one meanders along the inner and outer corridors allows the visitor to follow the life of Rabin from childhood to the tragic night of his assassination.

The sensor-activated audio guides activate speeches, news broadcasts, and newsreels, putting his life into the context of what was taking place in Israel and internationally at that moment in time. It’s a remarkable museum that brings to life the birth of Israel and the role that Rabin played in its history.

Born in Jerusalem in 1922, Rabin became a member and Chief Operating Officer of the Palmach, Chief of Staff of the IDF during the Six-Day War, Ambassador to the United States, and served two separate terms as Prime Minister:  From 1974 – 1977 (as the 5th Prime Minister of Israel), and from 1992 until his assassination in 1995. In 1994 he was awarded The Nobel Peace Prize for his role in creating the Oslo Accords.

The Irgun – based on the ideology and teachings of Ze’ev Jabotinsky – was an underground organization founded in 1931 that rejected the restraining policies of the Haganah, believed in the use of force, and viewed the British occupation as the main obstacle to establishing a Jewish state. It was led by several notable commanders, among them Avraham Tehomi, David Raziel, and Menachem Begin.

Menachem Begin became the leader of the Irgun in 1943 and some 34 years later, the 6th. Prime Minister of Israel from 1977-1983. He was the first Israeli Prime Minister to host an Arab president when Anwar Sadat of Egypt accepted his invitation to visit Israel in November 1977.

The museum relates the sad story of the ship Altadena which attempted to deliver arms to the beach in Tel-Aviv for the Irgun’s underground efforts.

The ship was taken by force when David Ben Gurion ordered the cargo to be confiscated. Sixteen Irgun members were killed as well as three IDF soldiers.

Anu – which translates to US in English, is located on the campus of Tel-Aviv University in Ramat Aviv.

It originally opened in 1978 as the Diaspora Museum. Using constructed sets, the latest technology, and audiovisual equipment, it told the story of the history of the Jews and introduced one to the lifestyles and traditions of Jewish communities around the world. 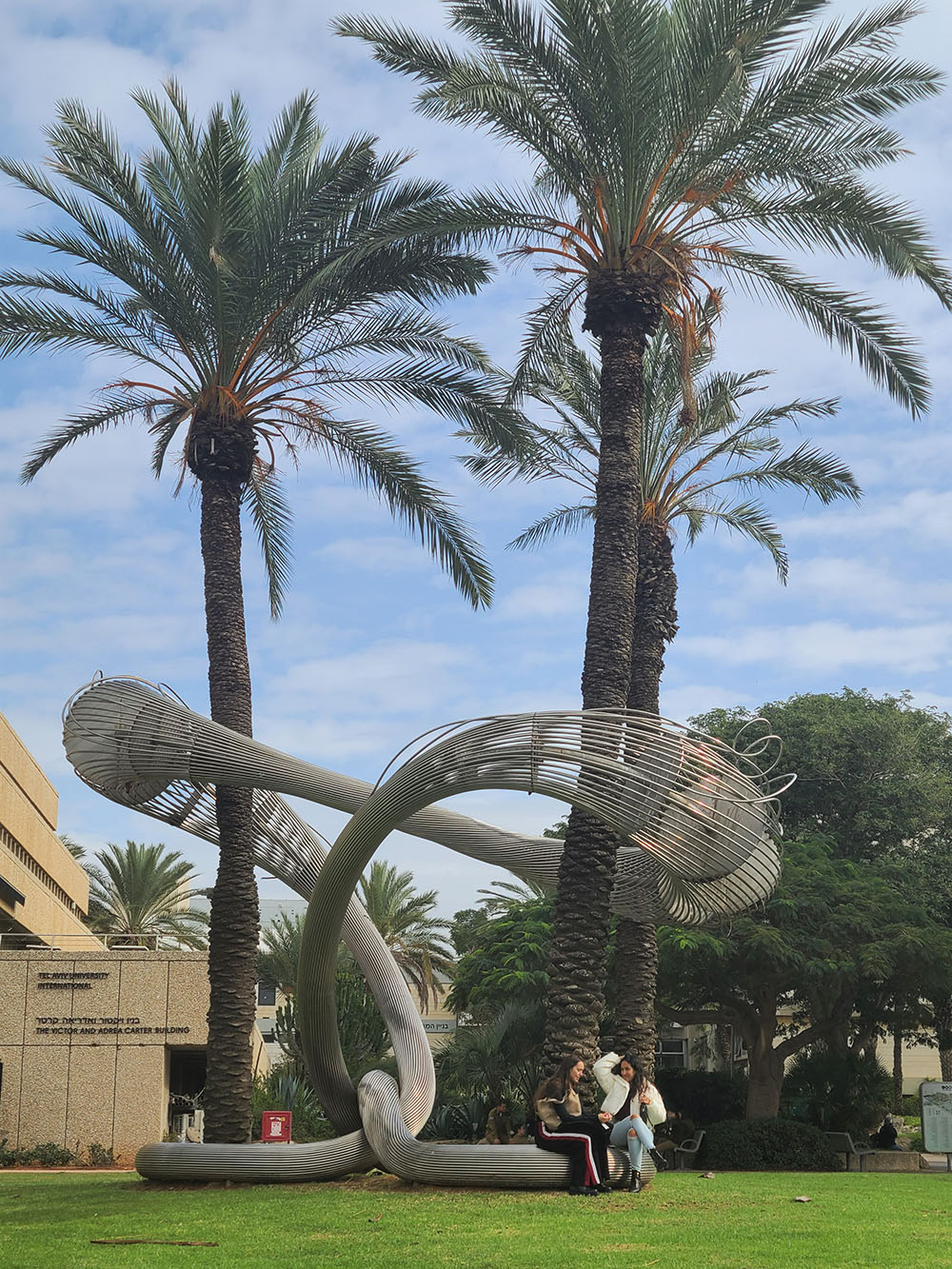 Anu celebrates Jewish history and diversity, pluralism, and multiculturalism. It tells not only the four-thousand-year Jewish history but the ongoing 21st-century story of Israeli and Diaspora Jews:  their contributions to music, art, poetry, literature, cuisine, innovation, fashion, language, and the movie and T.V. industry. 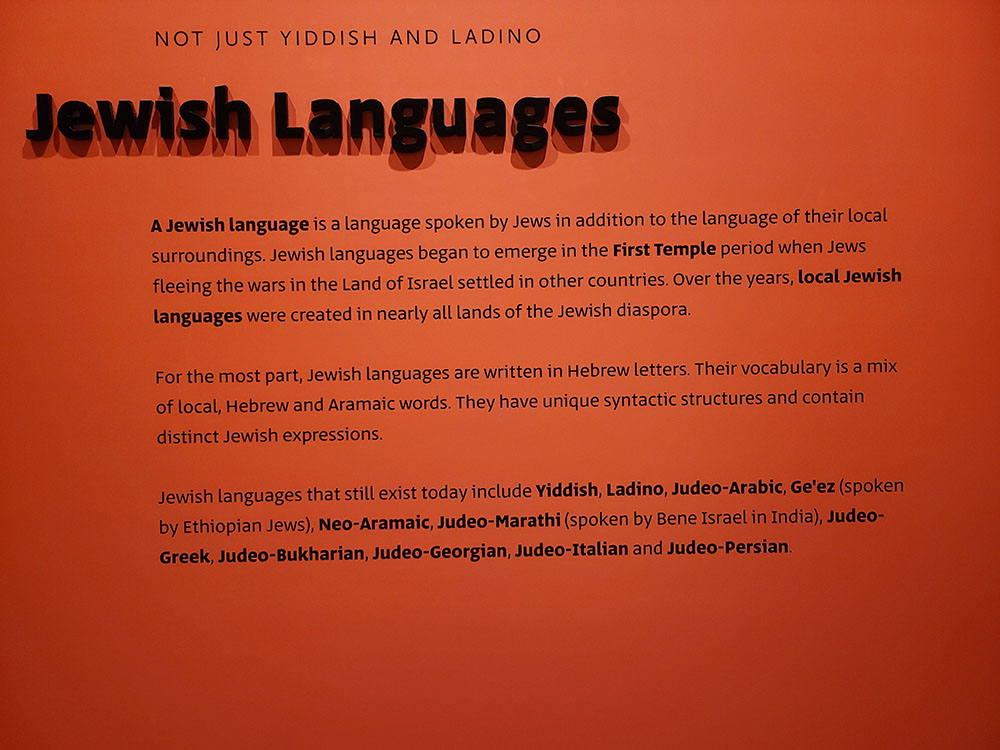 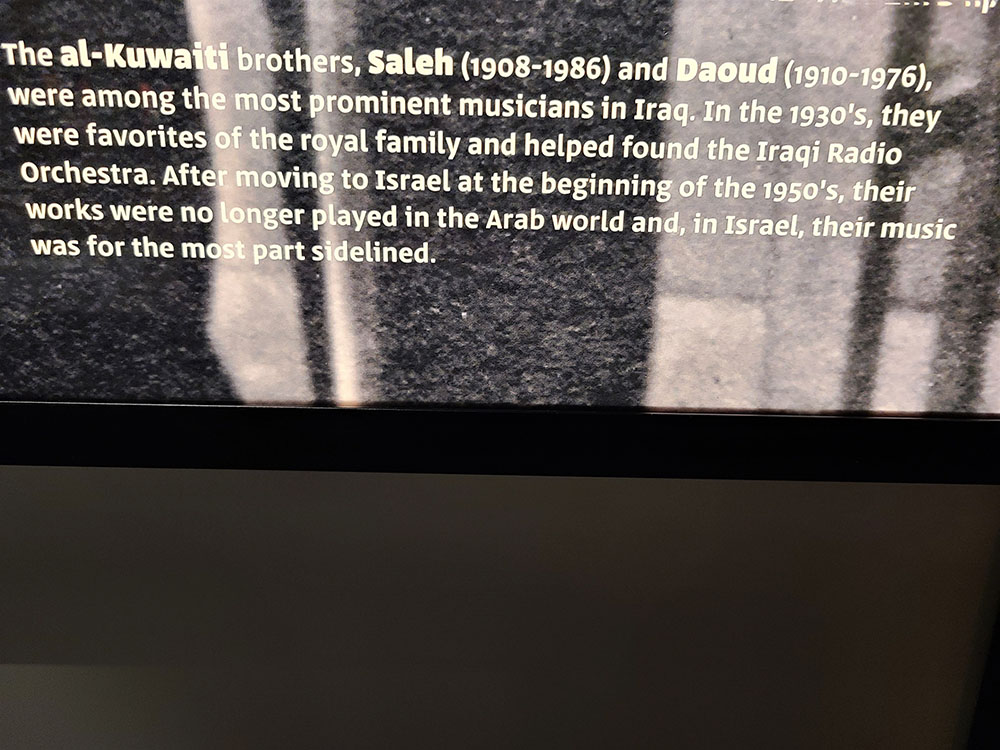 The Aroma café on the entrance floor has both indoor and outdoor seating. (The café is closed on Saturdays.)
Address: Klausner Street 15, Tel Aviv.
(On the University Campus)

Muza Eretz Museum – which has sweeping views of Tel-Aviv, rests on a historic Tel/mound from the 12th century BCE. It’s comprised of multiple exhibition pavilions, each dedicated to a different art form, archaeology, tradition, ethnology, or topic. The following is a description of just a few of the pavilions.

Glassmaking – Its history from biblical times to the innovation of glass blowing to the present.

Numismatics – The display goes back to the ancient barter system that predated coins as a payment method, to the Byzantines who introduced the first currency that indicated the face value of a coin, and walks its way through the evolution of coins.

Ceramics – How mankind experimented with hardening clay by firing it and creating pottery. On display are massive clay vessels, amphorae (Roman jars with two handles and a narrow neck) discovered at Tel Quasile, ossuaries/bone boxes for burial in caves, and clay coffins. 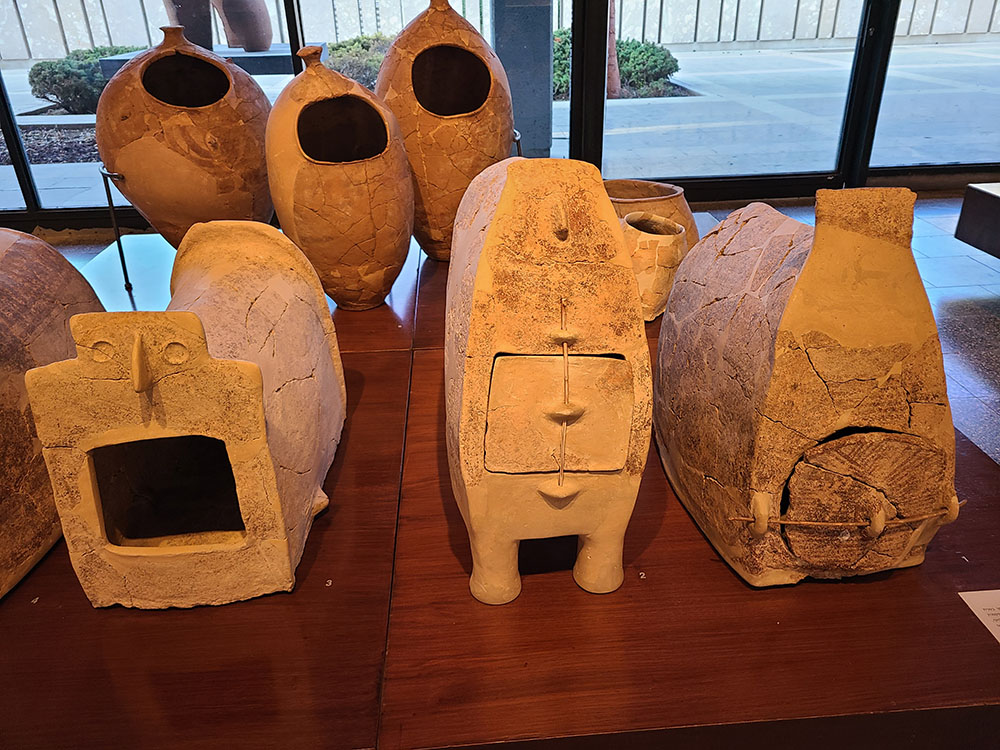 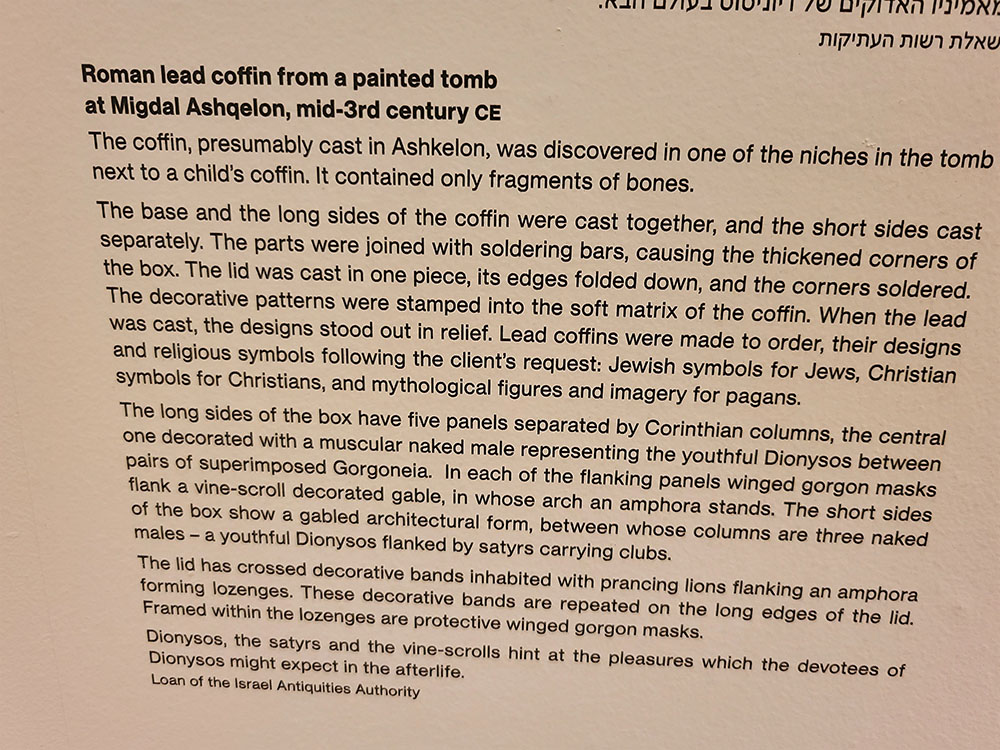 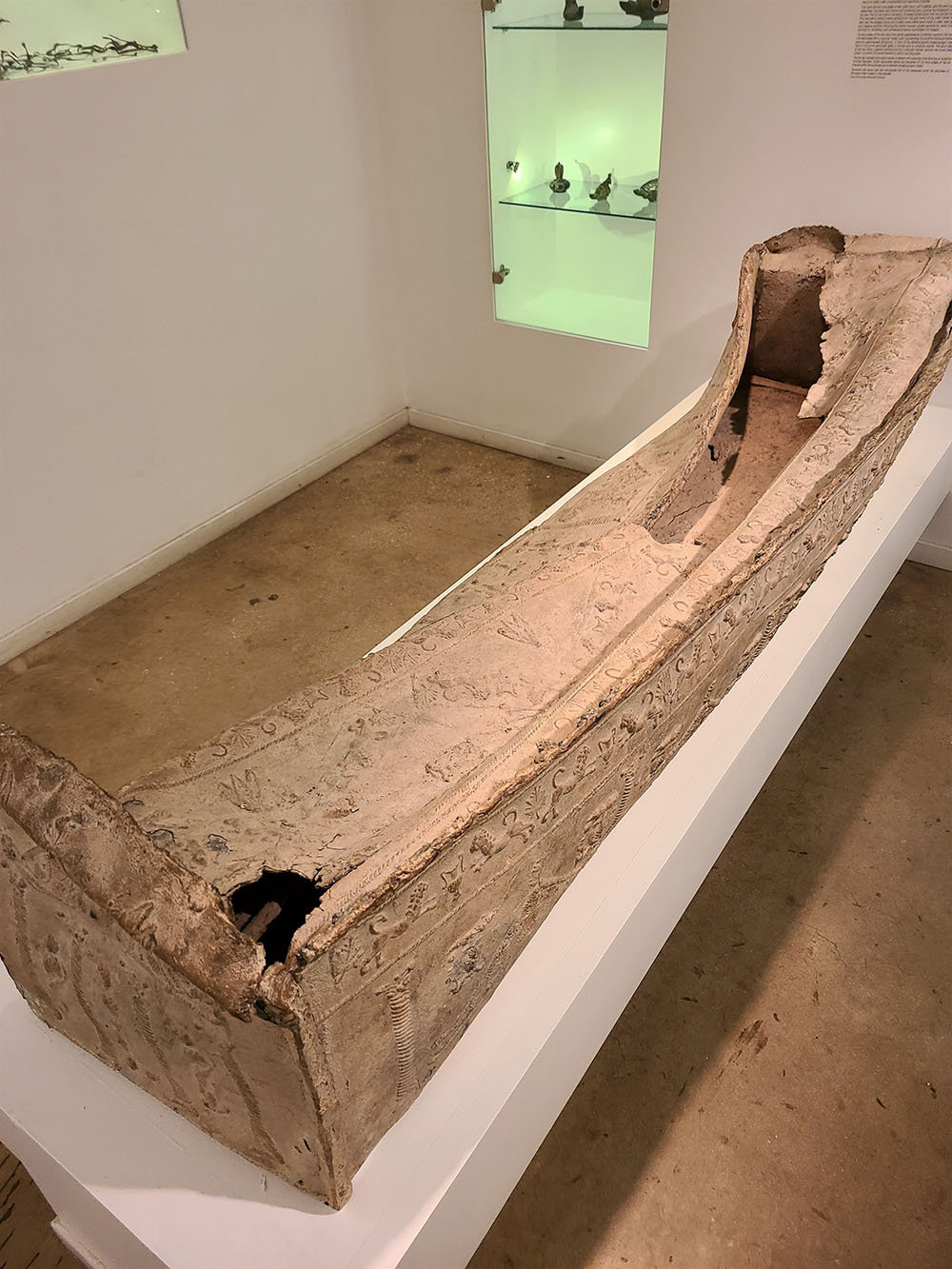 The Alexander Pavilion of History and Philately – Tells the story of the development of the Israeli Post Office from the 19th century until the founding of the State of Israel in 1948.

The Nechustan Exhibition Pavilion – Deals with the discovery of copper ore in Timna, in the Southern Negev during the Copper, Bronze, and Iron Age periods. At the entrance is a reconstructed mine. Then there are the smelting furnaces and artifacts from the Egyptian-Mediante mining temple at Timna.

In addition to its permanent exhibitions, Muza frequently has temporary exhibits. We were fortunate to see the spellbinding World Press Photography exhibition. 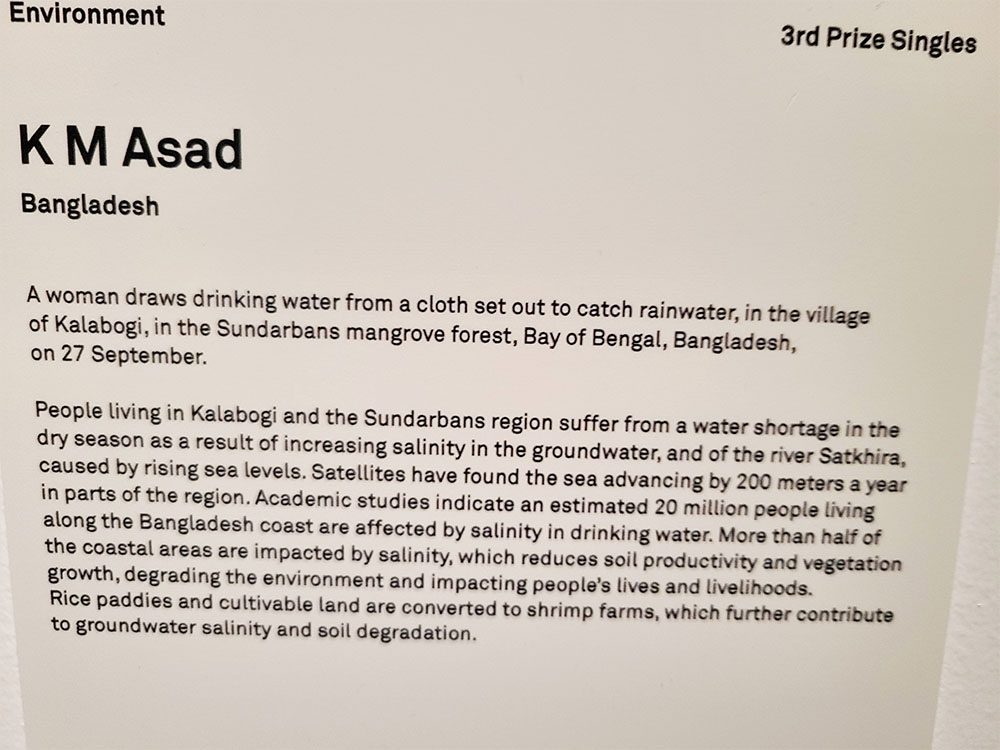 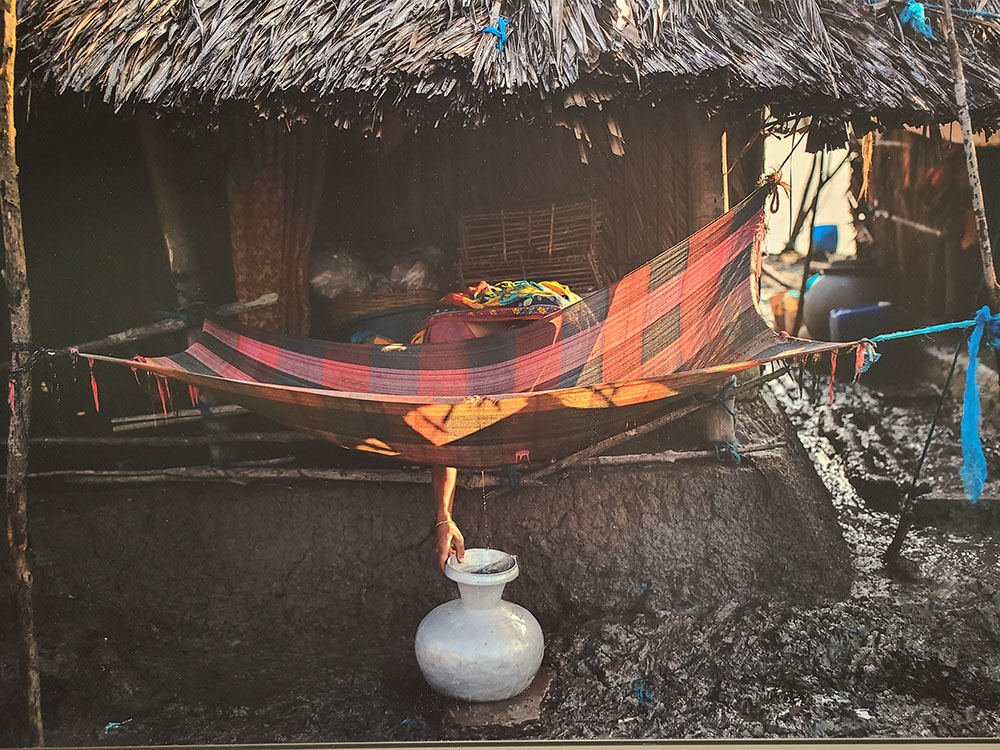 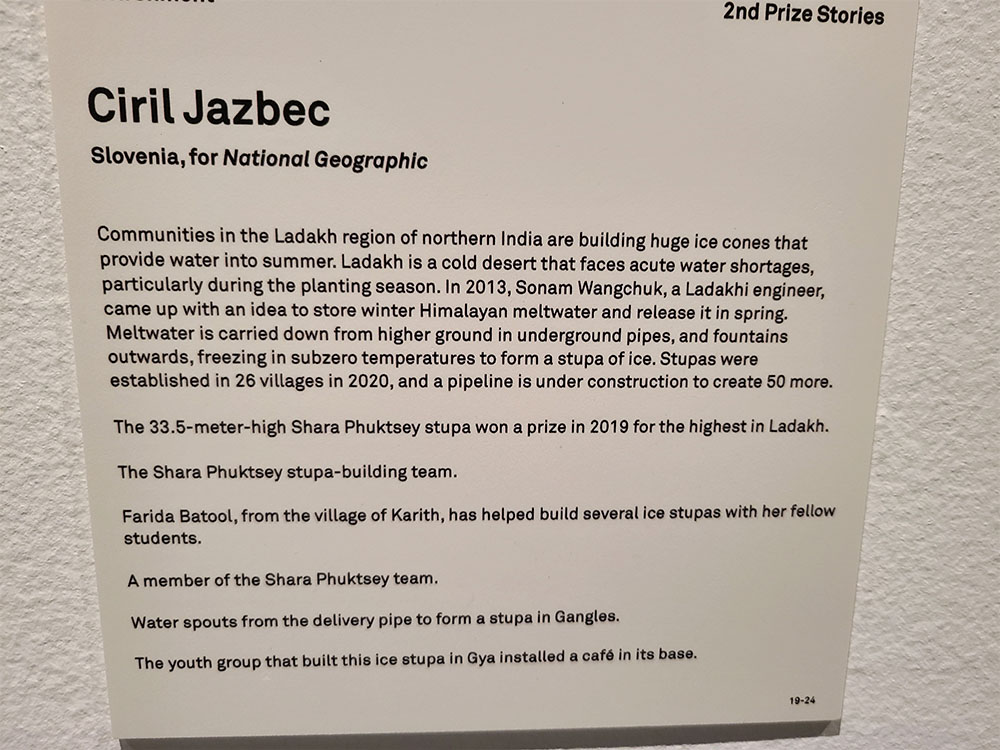 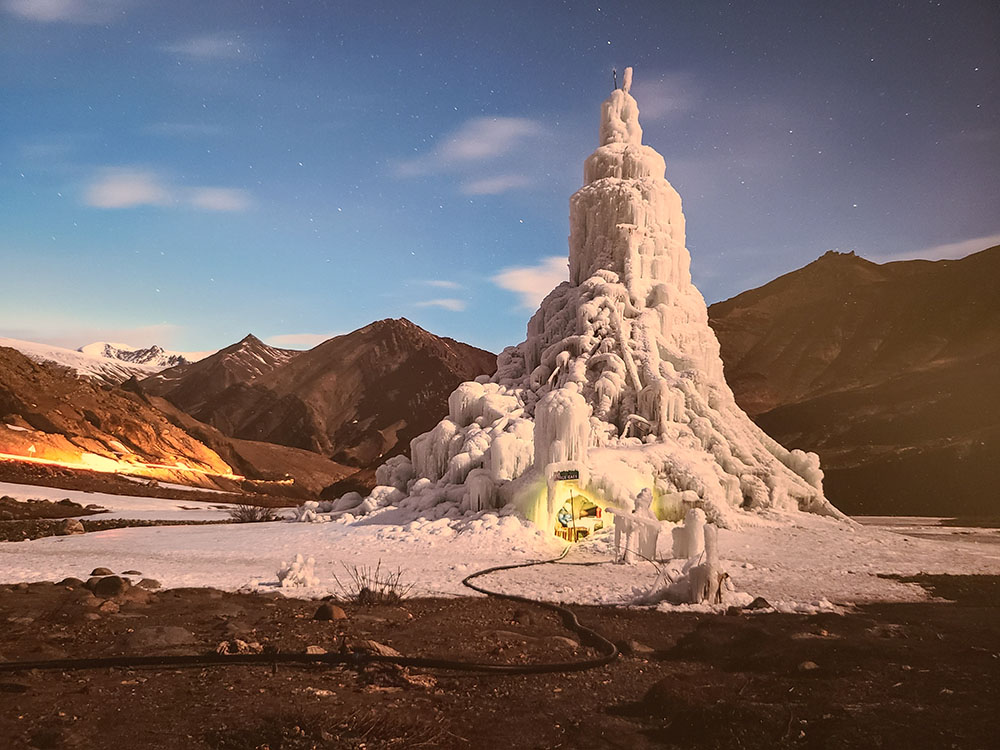 Take a break and enjoy a meal, coffee, and pastry at the indoor/outdoor restaurant, which overlooks Mosaic Square, where you’ll find the ancient mosaic floors from a synagogue in Tiberias dating to the 7th– 8thcentury CE. 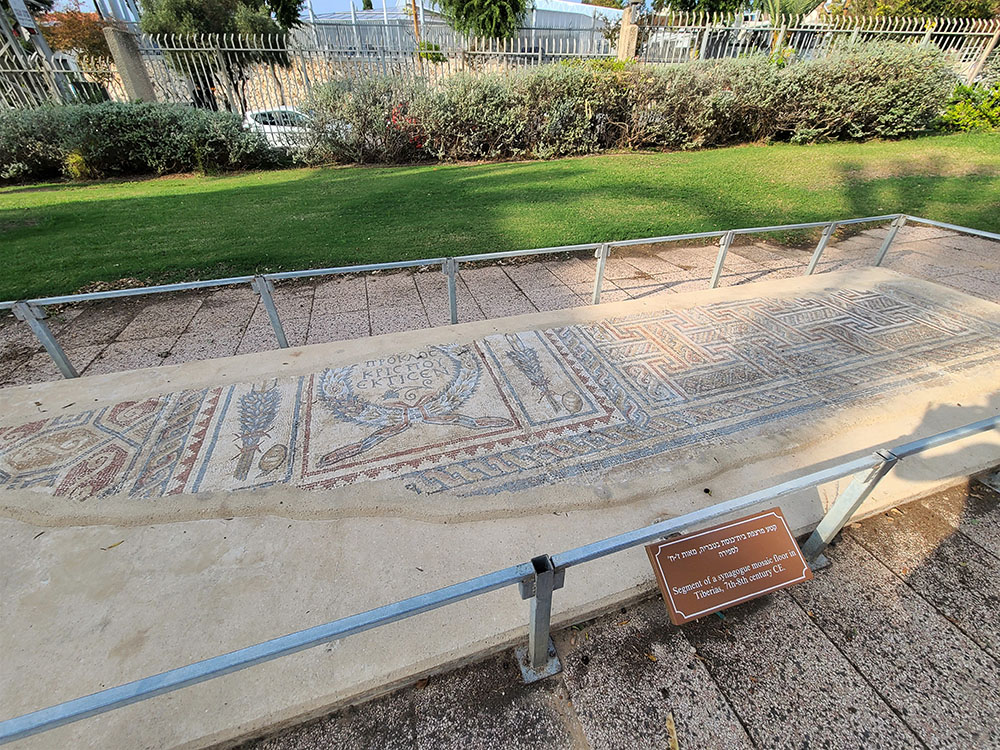 Visit the outdoor wine press from the Byzantine period 5th – 6th century CE, and stop to admire “The Bird Mosaic,” which historians believe covered the floor of a church prayer chamber. 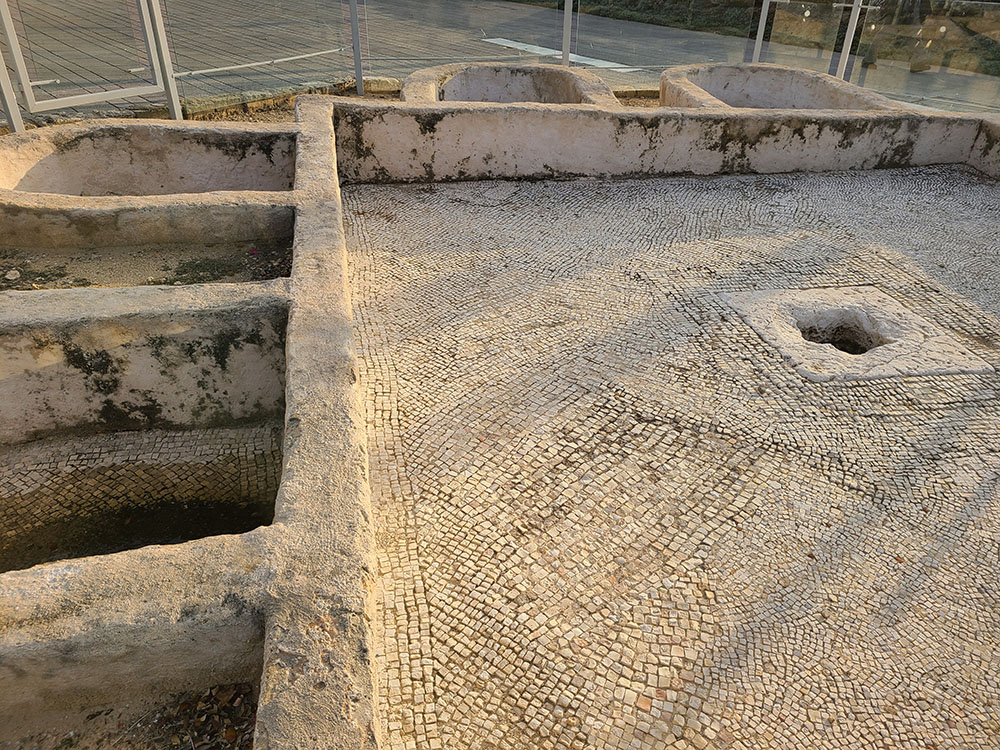 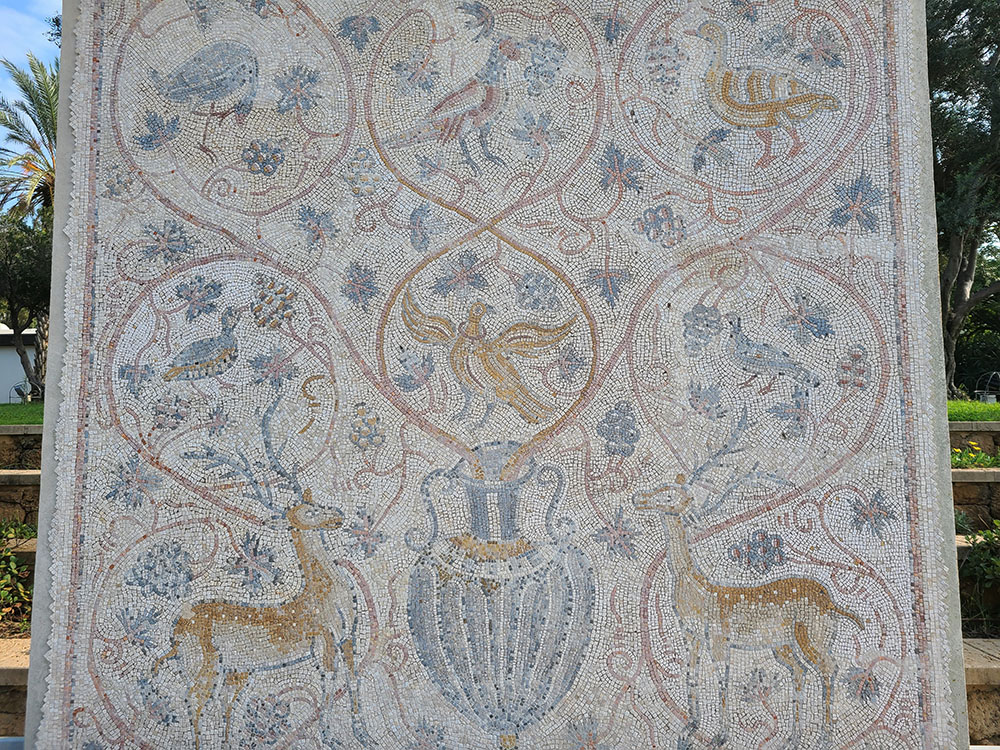 This Bird Mosaic covered the floor of a church prayer chamber

We spent an entire day at the Eretz Museum ending with a walk to the Olive Oil Plant and Tel Qasile – the archeological excavation where twelve layers of civilizations have been uncovered – going back to the 12th century BCE. 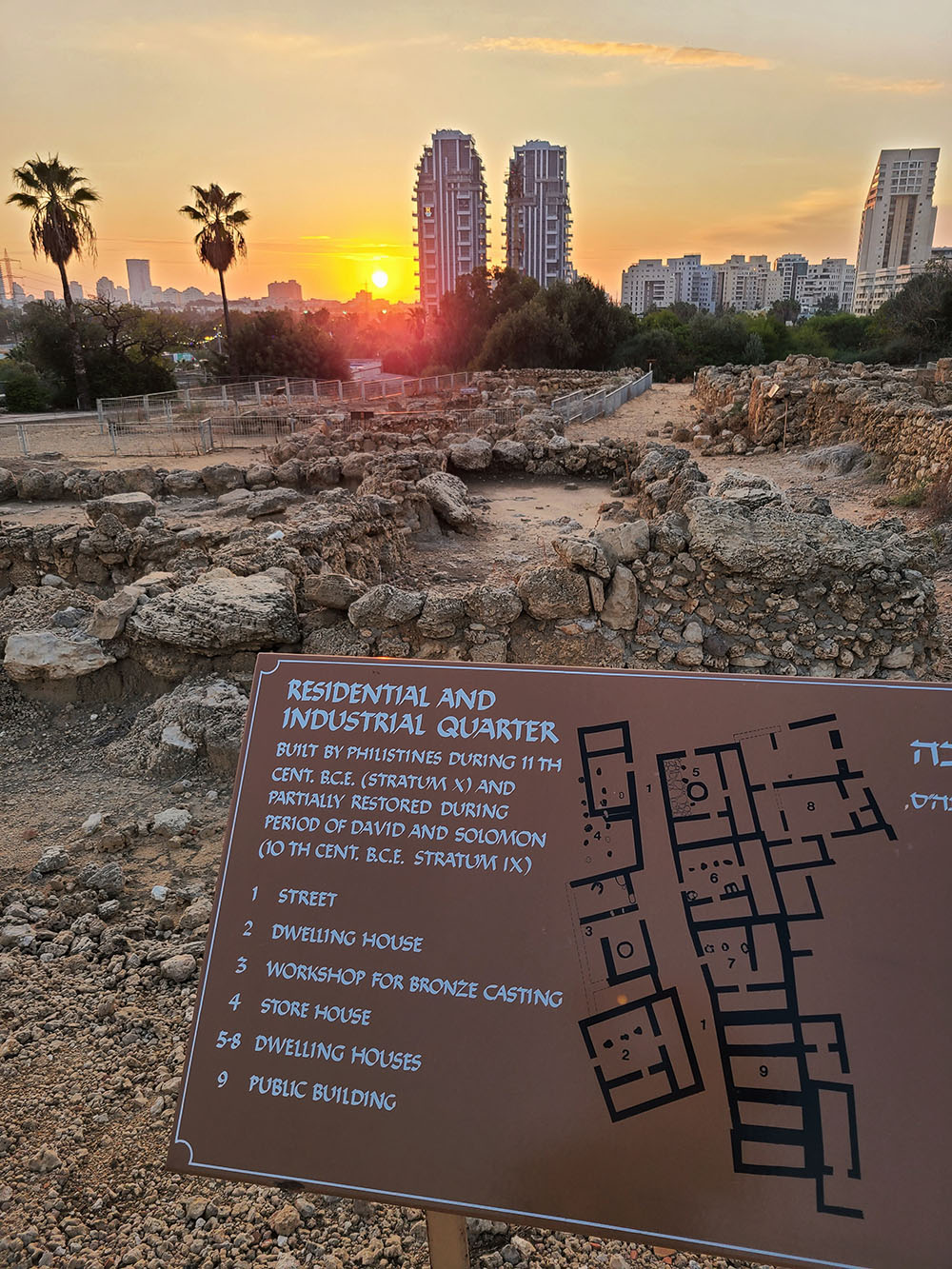 The Palmach was the strike force of the Haganah – the pre-state underground defense organization, which was eventually incorporated into the Israeli Defense force after 1948.

The museum is unique in that there are no exhibits. Instead, the visitor becomes immersed in what feels like a real-life experience as you join a young, dedicated group of Palmachniks. You move from chamber to chamber through soaring stone canyons, desert terrain, and eucalyptus groves, sharing their challenges, successes, struggles, caring for each other as solid bonds develop, and their sorrow as they mourn the lives of friends lost.

This innovative museum is a must. Allow an hour for the guided tour and additional time if you’d like to visit the library of photo albums contributed by family members and friends. Through the Palmach Information Center, you can find stories of Palmach members who died in the struggle for the establishment of the State of Israel.

Disclosure: The photo of the exterior of the Tel- Aviv Art Museum was purchased from Deposit Photos.